Guest Post: Sweaters for my characters by Kenneth Weene 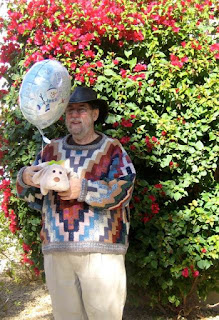 It’s a chilly day here in Phoenix, at least chilly by Arizona standards. I’m not one for being cold; that’s a major reason I live in “The Valley of the Sun.” But I do like chilly. That’s when I get to wear a sweater, and I love my sweaters.

Strangely I seldom dress a character in one – not in my short stories and not in my novels. I frequently describe their clothes, but they don’t wear sweaters.

For me sweaters are personal, preferably knitted for me by somebody who wants me to be warm and comfortable. A good sweater gives me the happy fuzzies. Wearing one is comparable to eating macaroni and cheese or a big piece of chocolate cake; it is comfort food without the calories.

It isn’t that I don’t want my characters to be comfortable. Of course, I need them to be uncomfortable and stressed enough to create a story, but I do want them to have the happy, comfy times, too. It’s just that I can’t figure out who knitted that sweater for them. Who in their back-story loves them that much?

Sure, people buy sweaters in stores. I have to admit that I have a couple of store-bought sweaters. One I had to buy when, while we were on vacation, the weather turned unexpectedly cool and I needed something warmer to wear. Another was a gift, and I didn’t want to refuse it; besides it really is comfortable and warm even if t lacks personal connection. Mostly, however, I wear the sweaters my mother-in-law knitted for me.

I know she didn’t love me that much. She did love to knit, and I was a willing recipient. So there are lots of sweaters in my closet, especially considering the few times I wear one each year.

She knitted those sweaters for me, and I have that back-story, but who would have knitted them for my characters. Since I write primarily about people who are trying to survive, people who are lonely and hurting, it is unlikely that they would have a hand-made sweater. Perhaps they picked one up at Goodwill or the Salvation Army, one that was donated. Then the sweater would have its tale to tell, but that’s something else.

Funny thing, I spend more time obsessing about how to dress a character than I do dressing myself. I throw on a pair of kakis, a tee shirt, and sometimes one of those sweaters, and I’m ready to take on the world. It is seldom that easy for the people in my stories; picking out their clothes is no simple task.

Sometimes Ken Weene writes to exorcise demons. Sometimes he writes because the characters in his head demand to be heard. Sometimes he writes because he thinks what he have to say might amuse or even on occasion inform. Mostly, however, he writes because it is a cheaper addiction than drugs, an easier exercise than going to the gym, and a more sociable outlet than sitting at McDonald's drinking coffee with other old farts: in brief because it keeps him just a bit younger and more alive.
Ken’s short stories and poetry have appeared in numerous publications including Sol, Spirits, Palo Verde Pages, Vox Poetica, Clutching at Straws, The Word Place, Legendary, Sex and Murder Magazine, The New Flesh Magazine, The Santa Fe Literary Review, Daily Flashes of Erotica Quarterly, Bewildering Stories, A Word With You Press, Mirror Dance, The Aurorean, Stymie, Empirical and ConNotations.
Three of Ken’s novels, Widow’s Walk, Memoirs From the Asylum, and Tales From the Dew Drop Inne, are published by All Things That Matter Press.
Please visit Kenneth Weene's website