With alternating chapters labeled 'before' and 'after' What Strange Paradise is a suspenseful adventure on sea and by land.

One day eight-year-old Amir Utu secretly follows his step-father, Younis, and winds up on an old fishing boat--the Calypso.

Amir has no idea where the boat is heading or why but he courageously tries to make the best of the situation in which he finds himself. His courage is truly tested when the boat capsizes off the coast of the island of Kos and he is forced to run from men in uniform.

Overwhelmed by the smallness of her island home, fifteen-year-old Vanna Hermes is outside doing chores when...

'Out from the mass of bronze-scaled trunks, haggard and panting, a small boy appears.' (p. 22)

Vanna immediately understands that Amir isn't an islander and that he's being hunted by the coast guard so she decides to hide the boy. It's a split-second decision--one born out of kindness.

For me, Amir's courage and Vanna's kindness made What Strange Paradise an uplifting story. 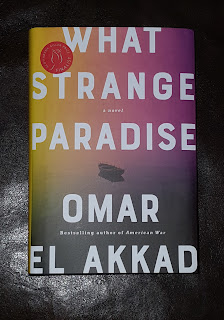 From an Independent Bookstore in

What Strange Paradise won the 2021 Scotiabank Giller Prize. It is a beautifully written book, full of insights by a careful observer.

I found two books that I'm looking forward to reading for Canada Reads. Take a look at the list. You might find some must-reads too.

this year's longlisted books inspire readers to reflect on community and who we are in the world we live in. -from the Canada Reads website