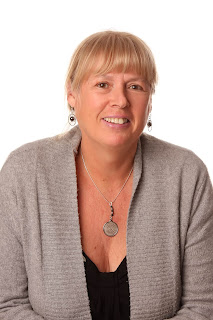 My writing career essentially began when I decided one year to write a children’s story for each of my daughters for Christmas. I wrote a story with them as the main character, printed them out, tied them in a red ribbon and gave them to the girls.  Thinking I might like to write for children I took a creative writing class at the local community college. I quickly realized I wasn’t interested in children’s writing.

But I was enjoying the course and I liked the idea of being a writer so decided to try my hand at a few short stories and eventually a novel.   Mysteries, of course, because that’s what I like to read.

A lot of hard work, and a lot of rejection.  I did the rounds of trying to get an agent and publisher and eventually I landed at Poisoned Pen Press which published Scare the Light Away in 2005.  The following year, they published Burden of Memory, which was actually written before Scare the Light Away, but they weren’t taking submissions when Burden was first written.  I am still with Poisoned Pen Press and they have just published my eighth book with them, a standalone gothic thriller titled More than Sorrow.  I also write the Klondike Gold Rush series for Dundurn.

A short story titled My Seat.  Which is a mystery story set on the Go Train into Toronto.  My Seat was a runner-up for the Bony Pete contest given out at Bloody Words, the Canadian mystery conference.

It was first published in a book of short stories titled Bloody Words: The Anthology, a collection of winners of the Bony Pete.

I was a computer programmer and a systems analyst. All of which had no effect whatsoever on my writing.

Good books!  I am a firm believer, and I try to impress this on my students at the many workshops I give, that if you want to be a writer you have to write. And you have to read. And read a lot.

How many books have you published now? What type of books are
you writing?

I have twelve published novels so far, including a Rapid Reads book. I write crime novels, and I define that much broader than the standard “murder mystery”. I am best known for my Constable Molly Smith series, a police procedural series set in the B.C. Interior (which has been optioned for TV!) but I also write the light-hearted Klondike Gold Rush books, as well as standalone suspense that have been called modern gothic thrillers.

I am not entirely sure what an author platform is.  I often do a blog-post run-up to the release of a new book.  Once a week, for about three months before the release of Gold Mountain, I wrote a short essay on some interesting aspect of the Klondike Gold Rush, with lots of pictures.  I did the same about the Loyalists (refugees from the United States after the American Revolution) in the run-up to the release of More than Sorrow, because that book has a backstory about the Loyalists who settled Prince Edward County, Ontario.  People were interested in the stories behind the books. My personal blog is titled One Woman Crime Wave (http://klondikeandtrafalgar.blogspot.com) . Drop by and say hi.

Read my books!  If you want a peek, or to learn more about me please visit my web page at www.vickidelany.com. 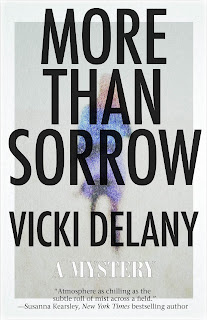 Vicki’s newest novel is More than Sorrow, which received a starred review from Library Journal, calling it “a splendid Gothic Thriller.”  New York Times bestselling author Susanna Kearsley said, “Atmosphere as chilling as the subtle roll of mist across a field.”

Once, Hannah Manning was an internationally-renowned journalist and war correspondent.  Today, she’s a woman suffering from a traumatic brain injury.  Unable to read, unable to concentrate, full of pain, lost and confused, haunted by her memories, Hannah goes to her sister’s small-scale vegetable farm in Prince Edward County, Ontario to recover.
As summer settles on the farm, she finds comfort in the soft rolling hills and neat fields as well as friendship in the company of Hila Popalzai, an Afghan woman also traumatized by war.

Unable to read the printed word, Hannah retreats into the attic and boxes of mouldy letters that have accumulated for more than two centuries.  As she learns about the original settlers of this land, Loyalist refugees fleeing the United States in 1784, she is increasingly drawn to the space beneath the old house.  More than carrots and potatoes, soups and jams, are down in the dark damp root cellar.

Hannah experiences visions of a woman, emerging from the icy cold mist. Is the woman real? Or the product of a severely damaged brain?

Which would be worse?

Then Hila disappears. When Hannah cannot account for her time, not even to herself, old enemies begin to circle.

In this modern Gothic novel of heart-wrenching suspense, past and present merge into a terrifying threat to the only thing Hannah still holds dear – her ten-year-old niece, Lily.