Part two of a review written by me (while in middle school). And in case you missed it (or what to re-read it), here's the link to part one. 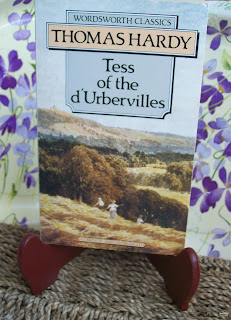 “Your Honour, we, of the Prosecution, are going to bring to light a bond and a special love between two persons: a love so strong that it withstands all. The love that is evident between Miss Tess Duberfield and Mr. Angel Clare. To illustrate this bond I shall call one member of this party to the stand. Prosecution calls Mr. Clare to the stand.”

“Will Mr. Clare take the stand?”

“Place your right hand on the Bible.”

“I swear by almighty God to tell the truth and nothing but the truth so help me God.”

“Do you remember the night that Miss Tess Durberfield told you of the abuse which she had suffered at the hands of Mr. d'Urberville.”

“Do you remember how she reacted when she heard your tale of the affair you had in London?”

“Yes, she excepted it with... Her love was unconditional.”

“Well, I suppose I felt anger not so much at Tess as the man who tampered wth my perfect image of womanhood. I was so naive.
I suppose I even felt that I had been deceived by her. I felt that she had simply used her respectability. It was in the heat of the moment I was insane with suffering. Her honesty cut so deep.
If she had only somehow made me listen. I would have understood. I would have.”

“Do you remember what brought you back to her.”

“I suppose it was while I was away in Brazil I came to realize that my love for her was not based on labels but on the woman.”

“Mr. Clare, the member of the Prosecution did touch on the flight you took away from Miss Tess Durberfield, but not to my satisfaction. I would like to ask you if you loved Tess as much as you profess you do what would motivate you to pick up and leave the woman you loved? Furthermore, what would cause you to stay away for one year during which time the woman you supposedly loved fell on such hard times that she unable to do little else but to return to the only man who seemed to care enough for her take her in—Mr. D'Urberville?”

“I suppose, sir, that I fled out of anger. Yet, the anger swiftly turned to sorrow as I realized fully what I had done to the woman I loved.
However, I stayed away one year to give her a chance to really come to terms with what she wanted to do.”

“One year for such a decision?”

“I too feel on hard times thus it was beyond my capabilities to return to her.”

“The Defense rests, your Honour.”

“The Prosecution rests, your Honour.”


“In light of the evidence that has been brought forward to me in this court of law the court has no other choose but to find in favour of Mr. Angel Clare.”

Next post:  What do you do when others don't believe in you?

Sharing my author journey...
How do you remain excited about writing?
One way I do is by reading good books and listening to authors I admire.

I've reviewed not one but two mysteries penned by Louise Penny:


The Beautiful Mystery
and
A Trick of the Light
And so when I heard that she would be interviewed as part of The Vancouver Writers Fest series of course I bought a ticket.
Monday, August 24th I will spend an evening with Louise Penny
And it gets even better because Ms. Penny will bring her newly released book...
The Nature of the Beast
I can't wait to buy my signed copy. : )
(Oh, yes, and you can bet that it will be reviewed on this blog.)