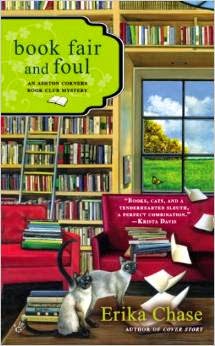 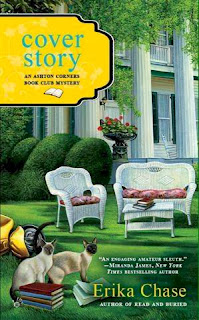 Cover Story is the 3rd book in the Ashton Corners Book Club Mysteries. What a cool idea. Imagine your book club can read about another book club in a mystery novel.
The story queston:  'Who would be so desperate to nab 150 copies of a sexy novel written by an elderly widow?' Fun and intriguing. I love cozy mysteries. And I sense a trip to my favourite bookstore being added to my future plans.

I realized I enjoyed writing when I was in eighth grade and received my best mark ever for a short story I wrote for an English class. However, I pursued a career in non-fiction as a journalist. It wasn't until many years later that I returned to writing fiction and have been doing so ever since.

I decided to take a creative writing course when my son was an infant and from there, joined a local romance writing association, then later switched my writing interests to a mystery authors association. I knew I'd truly found my place when my writing/critiquing group was formed. We're called The Ladies' Killing Circle and have been at it for almost 25 years!

My first two pieces of fiction, which were published at the same time, were short stories entitled, The White Swan Caper and There Goes the Neighbourhood.

My journalism education and career were definite assets as writing to deadlines was a given and not being too wordy was necessary. However, my most recent career was that of an owner of a mystery bookstore in Ottawa, Prime Crime Books. You can imagine how that tied in! I got to read mysteries galore, meet fascinating authors, talk to publishers, and spend time at conferences and book fairs. Pretty cool! It also gave me some insight into what readers look for in a mystery.

I write the Ashton Corners Book Club Mysteries as Erika Chase (I'm really Linda Wiken) for Berkley Prime Crime. There are three books--A Killer Read, Read and Buried, and Cover Story-- with the fourth, Book Fair and Foul due later this summer. Their cosy or traditional mysteries set in Alabama and are about, of course, a mystery book reading club. They love to solve them as well as read about them!

People inspire me. I start with my characters and build a plot around them. I'm also obsessed with names. The characters, as they develop in my mind, have to be named correctly. That's part of the process I enjoy. I'm always people-watching and do not bemoan long line-ups or waiting for flights (all right, sometimes I do!).  But I spend the time watching. So watch out!

I'm hooked into the social media network but I find what works best for me is the 'author meeting reader' technique. I never say no to an invitation to speak to a group or sign at a bookstore. And I'm eager to be on panels at the numerous mystery conferences I attend. That's also a part of it, attending conferences and schmoozing! 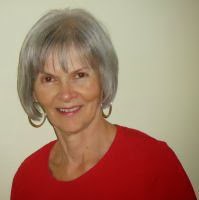 Never say never! Keep polishing that manuscript or short story but know when it's ready to be sent out. And if it comes back, just keep sending it out, over and over again. Of course, take some time to read any comments that an editor may send to you and make the revisions, if you believe in them. Also, keep writing!