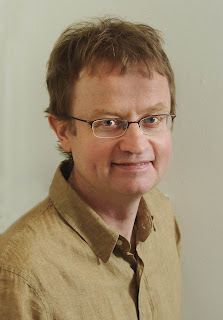 I have a British father, so that quintessentially Canadian moment, when father puts a pair of skates in his son’s hands, never happened. By the time I taught myself to skate – poorly – I was too late to get any good at it. In other words, I could never play hockey worth a damn, so I needed to do something else to get attention.
My father was, however, fascinated with words. That I did get from him.

I made all my mistakes on the same bad first novel that everyone writes: a quasi-autobiographical coming of age story. Then I wrote a real novel called The Final Confession of Mabel Stark, which was published around the globe. The film rights were optioned by Sam Mendes. Today, my novel-writing career is much like that of a compulsive gambler. I got lucky my first time out, and now I can’t stop.

I wrote a satiric column for one of the newspapers at Queen’s University, and then did a bunch of free (or close to free) work when I got out of school. Before becoming a novelist, I was a free-lance magazine journalist for a dozen years. My first real, full-length, feature magazine piece was a survey of Toronto’s underground publishing scene.

The only other job I ever had was in the media department of an advertising agency. I got it right after graduating, and was fired within eight months. Did it help? In a way, it did. Upon getting sacked, I realized if I was ever going to write, it might as well be now.

I don’t have a successful author platform, so I’m the wrong person to ask. I’d also like to suggest that any author worth his salt isn’t spending all of  his or her time posting quips and cute kitten photos online, though even this isn’t true: one of my favourite authors, Gary Shteyngart, is a compulsive Tweeter. So I don’t know. My honest opinion is that social media won’t help your career. Not participating, however, might very well harm your career, if that makes any sense.

If you want to be a writer, learn how to think up interesting stuff. If not, you’re dead in the water. 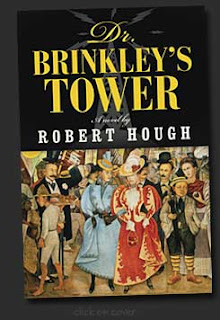 In Dr. Brinkley’s Tower, a medical charlatan builds a million-watt radio station in a small Mexican town. Goats are involved.

Hough handles his characters and the developments of the narrative with a masterful, merciless aplomb. Beauty is balanced with violence, broad humour interweaves with heartbreak, all within a novel that is at once utterly realistic and unremittingly fantastic. Dr. Brinkley's Tower – both the radio tower and the novel – is a thing of wonder.
-- The Edmonton Journal

The construction of Brinkley’s massive radio transmitter provides the backdrop for Robert Hough’s hilarious and penetrating fourth novel, Doctor Brinkley’s Tower...Hough is a master storyteller, and he works here with a practiced hand to avoid stereotype and at the same time give a clear sense of the general problems engendered by the new influx of wealth into the impoverished town.
--Globe & Mail

Hough’s greatest skill is as an old-fashioned storyteller. Dr. Brinkley’s Tower moves like an extremely well-oiled machine, juggling and nudging forward all kinds of subplots without ever drawing attention to the muscularity required to do so. The scene where a town-wide brawl breaks out in the wake of a misguided guess-how-many-gumballs contest brings a smile to my face, still… Not all novels need to put such a premium on storytelling, of course. But those that do would benefit from looking to Hough as an example of how to get the job done right. -- The National Post

One of Hough’s strengths is his ability to transmit the feeling of being immersed in his character’s culture, to bring to life the sounds and smells of another place and way of living, and he uses this to good effect here. The setting really comes alive with a multitude of small, finely observed details, which are so judiciously placed that they almost invisibly spin a web of believability, and by the end of the novel, when one of the characters is reflecting on a lifetime spent actually loving his isolated, barren home, the reader is completely convinced. Hough has substantial storytelling chops.
-- The Toronto Star

With ingenious characters and striking scenes, Hough reveals a love of Mexican culture and has crafted a story that convincingly illustrates the emotions of men and women confronted with the vulgarities that can arise with prosperity, and the felicity they find within tradition and the fellowship of friends and family. – FFWD, Calgary

The characters in this book are fantastic and the story is compelling. Hough does a fantastic job of imaging how prosperity comes to a town and changes people in a way many of us could never imagine.
-- The Writers Trust of Canada

Dr. Brinkley's Tower  is a lush, beautiful novel about Mexico in the 1930s....Hough makes you cheer for the characters, and for their town, as they struggle against the compromises imposed by “progress.” I especially love how relevant this story feels, even as I felt transported into the past. Above all, I fell in love with Corazon de la Fuente and with Francisco, Violeta, the mayor, at all their neighbours.
-- Literary Treats

Dr. Brinkley’s Tower is a cautionary tale of human nature and imperialistic intent that masterfully juggles a handful of characters. The tower is just the catalyst, how each character evolves afterward, from the cantina and brothel owners to the humbled mayor, aging Casanova and town beauty is consuming.
-- The Halifax Coast

With ingenious characters and striking scenes, Hough reveals a love of Mexican culture and has crafted a story that convincingly illustrates the emotions of men and women confronted with the vulgarities that can arise with prosperity, and the felicity they find within tradition and the fellowship of friends and family. – FFWD, Calgary

The characters in this book are fantastic and the story is compelling. Hough does a fantastic job of imaging how prosperity comes to a town and changes people in a way many of us could never imagine.
-- The Writers Trust of Canada


Brinkley is a larger-than-life character, oozing American entrepreneurial spirit in a way that is simultaneously entertaining and disgusting. Ironically, he’s somewhat at the periphery of this novel, for Hough centers his work in the sleepy Mexican town of Corazón de la Fuente, where we meet the sweet and hapless Francisco Ramirez. He’s besotted with Violeta Cruz, a village coquette, though Brinkley eventually seduces her away from Francisco by giving her a job at his radio station. He claims to see in her the makings of a seer, so he sets her up with her own radio show, where she tries to help callers with their personal problems. Along the way we meet a variety of small-town characters, like cantina owner Carlos Hernandez, who develops a problem with impotence; Madame Félix, owner of the local bordello, “The House of Gentlemanly Pleasures”; and Miguel Orozco, the mayor of Corazón de la Fuente, who senses Brinkley chipping away at his political power. Hough manages to take all of these characters beyond stereotypes and invest them with humanity and humor.
-- Kirkus  (U.S)

Fans of Gabriel Garcia Marquez will recognize a touch of his lyricism, but this book is firmly grounded in reality. At the core of the richly interwoven stories  is the search for the difference between false promise and real worth. Memorable historical fiction.
-- Booklist (U.S)