Chapter four: Aster has lost her husband on the ferry? Will she ever find him again? Or is that how she ends up on-- ? (I've said--or written--too much.) 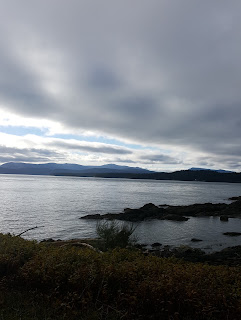 Children came running at and almost directly into Aster, thankfully, at the last minute they veered off. Were they wild? Did no one own them? Clearly, they weren’t being properly supervised. What if they injured themselves? What if they fell down the stairs?

“Stop running,” Aster called after them but they paid no heed. She’d tried to correct their behaviour and was the only one on the entire deck who had bothered. If something happened—. When something happened it wouldn’t be her fault. Her conscience would be clear. No guilt. That thought only lasted a second. It lasted long enough for Aster to realize that of course, she would feel guilty if or when the children got hurt. When that happened she knew she would scold herself because she hadn’t done enough. But what could she do? Only hope for the best. She decided to stick her head in the sand like the rest of the passengers.

This deck was much more populated and Aster was confident that she would find Kenneth James amongst these passengers. And sure enough, she found him on a blue vinyl bench at the front of the ferry, in front of an ocean view. How ever beautiful the view it was lost to her husband. His nose was in a book. But when was his nose not in a book? In the early years of their relationship, she’d thought it charming.

She charged up to him. “Kenneth James why didn’t you—.”

He ignored her, and just kept reading.

But others, strangers, looked at her.

Not wanting to create a scene, she abandoned the carefully prepared speech she’d planned to deliver and—.

The part of the bench he’d left for her was torn and once again she found herself face-to-face with proof of how little he thought of her. Having no choice, she joined her husband but her bottom didn’t thank her for the predicament she’d been forced to accept. Her gaze drifted from the ocean to the book her husband held in his hands.

Mayne Island and the Outer Gulf Islands: a history by Marie Elliot. Of course, he was reading about that island. He was obsessed with it.

And she? She had grown to hate it for the same reason other wives detest gulf or hockey. The island was a rival for his attention. 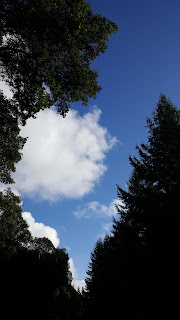 So she did find him. That's a relief. He was on a bench reading about Mayne Island--an island Aster hates. Her hatred of the island begs the question, why was she on that ferry sailing toward it?