A boy's friendship with a World War II veteran raises suspension but lasts a lifetime.

The year is 1947. Twelve-year-old Leonard Flint has been living in Canwood, Saskatchewan for two years. And still, he has no friends. No friends but one--William Dunn, a veteran of World War II.

Did the hairs on the back of your head raise when you read that paragraph? What about if I add that Bill lives in a hill--Sugar Hill--and that he doesn't have a "real" job--he catches wild rabbits and sells their severed back feet?

Do you fear for Leonard's life?

Why would a grown man want to be friends with a teenage boy? What is the nature of their relationship? Those are the questions that lead me through this at times disturbing, at times tender tale.

Rabbit Foot Bill is divided into four time periods--1947, 1959, 1960, and 1970. We watch Leonard grow from boy to man. He's far from being a hero. His flaws are glaringly obvious. Because I meet Leonard as a vulnerable boy, I hope for the best for him. When he meets with tragedy--fired from his job--I blame him for not living up to my expectations. Am I justified in blaming him? 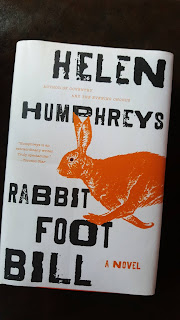 Based on a true story/historical fiction

Helen Humphreys kept me captivated up to and including the tender final scene. And yet, I was surprised to discover that I wasn't reading this story I was blindfolded and was being led through the story. Or maybe Humphreys was a magician. All the time my focus was on her right hand when I should have been watching her left.

Coming soon to this blog... 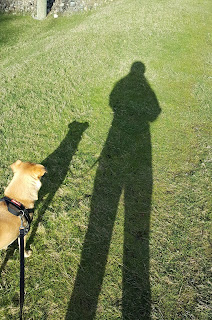 On Easter Monday, a good friend died...
Cedar Christie was one of the first friends I made on Mayne Island--over twenty years ago.
She had one of the first parties that I attended on Mayne Island. At that party, I decided I wanted to learn how to write and began to form my first writing group.
Back when I was a knitwear designer, inspired by one of Cedar's paintings, I designed a sweater. It was included in an art exhibit displayed at Mayne Island's library. 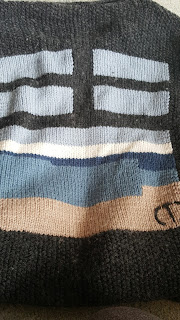 the beach as seen through a window
Over a decade ago, Cedar and I attended the Mayne Island Lavender Festival. While at the festival, Cedar and I wrote this poem...
Lavender blue, lavender blue
We have some for you
If you don't buy them
We're sure to be blue
Lavender, lavender
Yoo-hoo, yoo-hoo
Cedar was a supportive friend, an inspiring artist, and I will miss her.
Cedar Christie's art 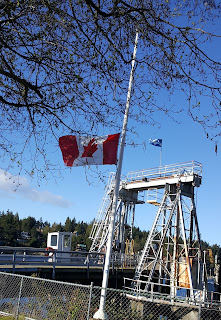