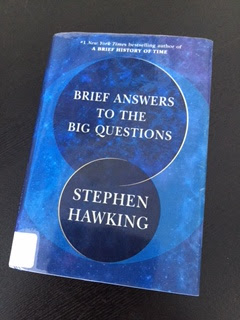 BRIEF ANSWERS TO THE BIG QUESTIONS

Stephen Hawking was a renowned cosmologist, a Professor of Mathematics at University of Cambridge for thirty years, an author of eight books delving into time, physics and cosmology, a family man who helped raise two children, and with his daughter Lucy was the author of five children's books. He did all this while coping with a debilitating disease--ALS.

At age 21 he was diagnosed with Amyotrophic Lateral Sclerosis with a life-expectancy of 2 - 5 years. With human and technological help he defied that prognosis and not only lived but worked for 5 more decades. Though he was slow to learn to read and his handwriting was untidy, he was inspired at age 14 by a wonderful teacher who opened his eyes to maths as the blueprint of the universe.

Sprinkled throughout this book's serious essays is Hawking's amazing sense of humour. While struggling to understand the relationship of the Big Bang and the Big Crunch, I learned he had been asked not to mention the Big Crunch in case it frightened people. But, he wrote, word got out and the markets crashed. However most people in England failed to worry about a possible end of the world in twenty billion years because they knew they still had lots of time to eat, drink, and be merry.

At present, he wrote, computers are less complex than the brain of an earthworm, but with the development of Artificial Intelligence that can rapidly change. It is vital that human biological systems keep ahead of electronic developments.

He delved into warp space-time and wormholes and how they might connect two sides of the galaxy and short-cut travel. Apparently a person might travel one way and return before having left. To illustrate this point he quoted a limerick:

There was a young lady of Wight

Who travelled much faster than light

She departed one day

In a relative way

And arrived on the previous night.

If travel back in time becomes available, Hawking suggested a Chronology Protection Law would be necessary to prevent people from going back and killing their parents.

He discussed Black Holes, Alternative Histories concepts, and DNA changes that could treat and cure human illnesses. he advised against a totalitarian government manipulating DNA because such a government would be inclined to ignore unintended consequences.

To solve population problems or nuclear war, he recommended colonizing a plant that has magnetic fields like earth. Apparently a planet in the solar system of Alpha Centauri looks hopeful. Though not a Trump fan he was pleased with Trump's Space Policy Directive refocusing NASA on exploration and discovery. Hawking was confident the policy would inspire young people to pursue the study of science and technology.

Near the end of the book, Hawking wrote these encouraging words:  "we never really know where the next great scientific discovery will come from, nor who will make it... Don't give up. Unleash your imagination. Shape the future."