The Other Side (short fiction) Ch. 14 by Leanne Dyck

Ch. 13 Becky and Tom--with their dog Rusty--visit Mara and Owen in their new home. Becky and Tom realize that they know the house--it was the grow op where they bought their drugs from a woman named Windy. 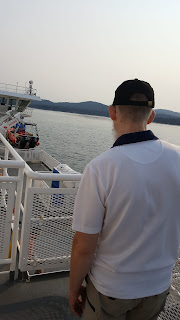 Chapter fourteen
How did Windy end up on the other side of the wall? That's exactly what I asked her the next time we meet. "You lived in my house."
She was usually mellow, but she wasn't mellow then. "What? No, I didn't."
"But... But..." I sputtered.
She put her finger to her lips, silencing me, and ushered me into her cabin. It was a sunny, warm day--as always, on that side of the wall. Still, Windy closed the door and the window shutters. Light leaked in through the gaps. She set a tray of two handle-less mugs and a small teapot with a matching sunflower print on the chrome table. "What do you know?"  She paced over the purple and pink poke-a-dot floor.
"Becky and Tom told me that you are from our side of the wall, but now you live here. How? Why? What h--?"
She froze. "Tom? Becky? They know where I am?"
"No, I don't think so. I didn't tell them."
She relaxed into a chair and poured us both a cup of tea. "Good call."
"But I want to know how you got here."
"That's not important."
"It's important to me."
"You don't need to know."
"The truth is the price of my silence."
She took a sip of tea. "Everyone is born on one side of the wall or the other. They may be happy on their side. They may feel that everything is groovy or they may feel like something is missing--like a match without a flame. Crossing over to the other side may lead them to contentment, but they don't know that. They don't even know that the other side exists." She took another sip. "Until it's too late."
"What do you mean too late? If no one can cross over between worlds, how did you get here?"
"Are you sure you're ready? It's really heavy."
"I've seen, heard, been through a lot of strange things--especially lately. I can handle it."
"Yeah, you can, but you might not know you can. It might be learning you can that flips you out."
"You're talking in riddles. I don't want to play games. All I want is the truth."
"Did Becky and Tom tell you what I did for a living?"
"Yeah, they said you grew um... Mary-do-you-want-ta."
"The sweetest Mary Jane you've ever had." She sounded so proud. "Everyone wanted to taste my babies. Everyone wanted to know how I grew them. Everyone wanted to learn my secret. Some wanted it too much, especially him. Hunger for the secret drove him to my door. I was downstairs when he came."
"In the laundry room."
"In the laundry room. Taking care of my babies--watering, pruning. There was this knocking--like gunshots. I thought it was the cops. He burst in, with a knife. He was coming for...for... Them. I couldn't let him have them. I couldn't let him kill them for his greed. I needed to keep them safe. He was a lot bigger, a lot stronger. He stabbed me again and again and again." She winced at the memory. "He left me for dead. I thought I was dead. I thought this was heaven." She smiled. "And it is. Dig?"
This side of the wall was...heaven. That was like... Wow! "Your secret is safe with me."
"Thank you, but that's only half of it. That's only my half."
"What do you mean, your half."
"Like I said, this is heaven, but you're not dead. So..."
"How am I here?"
"The first time you came... Remember the first time? The bunny knew your name. We were waiting for you. We were so excited that you'd finally come."
"Finally...?" I gulped.
Then she dropped the other shoe and it sounded like a nuclear bomb going off. She spoke softly but split my eardrums. "Most people are stuck on one side or the other. Most people are, but you, Mara. You can go anywhere. You belong to both sides. You, and only you, are truly free."
I studied the floor for the longest time. It was a lot to take in, especially all at once. Looking up, I asked, "But...but why me? What's so special about me?"
The End
Thank you for your interest in this short story.
I hope you enjoyed reading The Other Side. 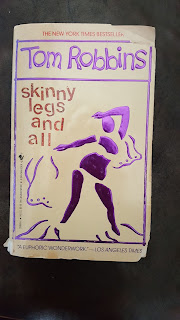 Next Sunday:  Sunday, August 29 at 4:40 PM PST
Book Review:  Skinny Legs and All by Tom Robbins
An old favourite of mine
Posted by Author Leanne Dyck at 4:40 PM