History is more than a little confusing. For example, let's try to solve the mystery of who discovered Canada.

I typed that question into a search engine. It spits back: Jacques Cartier in 1534. Huh?

When I typed in what did Leif Eriksson discover I was directed to biography.com

'Leif Eriksson was on his way back home
to Greenland...when he sailed off course
and landed at what is now Nova Scotia,
which he called Vinland. This account
comes from the Icelandic Eriks saga.
Another account, the Groenlendinga saga,
says he learned of Vinland from an Icelandic
trader who had been there 14 years earlier...
By most accounts, Eriksson sailed from
Greenland to Norway in 1000.'

I typed in: what did George Vancouver discover? This time I was sent to Wikipedia.

Confused yet? Have you figured it out? Who discovered Canada? Was it lost?

I typed in what does Canada mean?

Wikipedia informed me that...

'The name of Canada has been in use since the earliest European settlement in Canada,with the name originating from a Saint-Lawrence Iroquoian word kanada
(or canada) for “settlement”, “village', or “land”.'


and from the Canadian Heritage web site.

So imagine, I'm at home on Mayne Island. It's a sun-filled day and say I'm outside working on the yard. A tourist from Vancouver Island shows up.

I'm forced to move down into the basement.

He tells me, “I like it here. I mean, it's pretty and all that but what do you do about this and this and this.”

So I teach him some tricks to make adjusting to rural life much easier. I think we're friends.

One day, he says, “You know you look really cramped, living in the basement.”

I think how nice of him to notice.

He says, “I'm sure you'll be much happier living in Victoria. We'll teach you how to be a city person. It'll be a much better life than the one you had on Mayne Island.”

With me out of the way, he's free to treat my island any way he wants. He builds fast food restaurants and paves over flowerbeds for parking lots. He pollutes the water and the air.

Now, of course, none of that will happen. I'm just a white woman wondering what it's like to be Aboriginal. All I can do is wonder. But Thomas King knows and he has opened my eyes.

The Inconvenient Indian is not a easy read, but it is a necessary one. And thanks to King's wit, it is doable.

He discusses three types of Indians.

'Dead Indians are dignified, noble, silent, suitably garbed. And dead. Live Indians are invisible, unruly, disappointing. And breathing. One is the romantic reminder of a heroic but fictional past. The other is simply an unpleasant, contemporary surprise.' (p.66)


'Legal Indians are those Indians who are recognized as being Indians by the Canadian and U.S. governments.'(p. 68)


I like how King answers the question of what do Natives want. It speaks to the diversity of a people. Aboriginals are a diverse people. It was the white man who lumped them all together under one title—Indian. King makes this point through out this book. Whites made the classification. Aboriginals did not.

Some may say the abuses done to Aboriginals is old news and they should just get over it.

'[A]n examination of the past...can be instructive.It shows us that there is little shelter and little gain for Native peoples in doing nothing.' (p. 265)

If Native people want sovereignty and self-determination, they will have to fight for it, King concludes.

Favourite quote: 'The fact of Native existence is that we live modern lives informed by traditional values and contemporary realities and that we wish to live those lives on our terms.' (p. 266)


If you would like to gain better understanding of the Aboriginal experience in North America, I highly recommend... 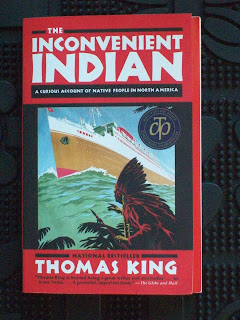 Sharing my author journey...
On Mayne Island, The Inconvenient Indian was not only a book but a challenge. A challenge issued... 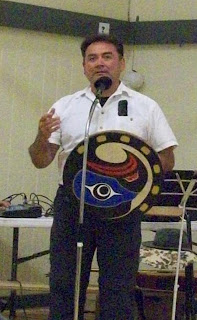 to raise islanders' consciousness regarding the issues faced by Aboriginals. Readers were invited to participate in talking circles. There we talked about the book and our own experiences. And, on June 21st, we celebrated achieving the challenge of reading this book with a party. A wrap up talking circle will be held at the library on Thursday, June 25th.
Here's the link, for more information regarding this event.
Posted by Author Leanne Dyck at 5:00 PM