Cozy Cat Press began business in 2010 with publication of its first two cozy mysteries––founder and publisher Patricia Rockwell’s “Sounds of Murder” and Diane Morlan’s “Too Dead to Dance.”  The small independent publishing company, is located in , a suburb.

Cozy Cat Press is devoted to the publication of “cozies” or light mysteries that focus more on characters and plot than on graphic violence or explicit sex.  The “cozy” has a long tradition, starting with Agatha Christie’s Miss Marple character, and continuing to the present-day with the television series “Murder She Wrote” starring Angela Lansbury.  Modern cozy fans are typically more interested in reading about amateur detectives and their exploits in solving crimes in their communities.  The genre has become quite popular recently with cozy mystery heroines (most cozy main characters are female) coming from the ranks of school teachers, librarians, shopkeepers, seamstresses, caterers, nurses, babysitters, hairdressers, and various other careers.  Cozies are generally filled with humor, romance, and lots of local color.

At present, the company has over thirty authors from the United States and Canada in its catalogue with over fifty books published in total. 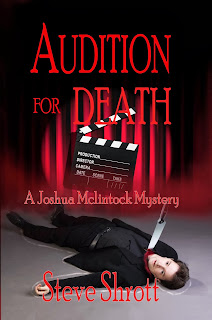 "Hollywood is in trouble and only one man can save it!

Obsessed actor Joshua Mclintock is not on the "A" list--his last role was playing bad breath in a mouthwash commercial. Assisting him as he struggles to the top is his agent, Robert Bigalow (aka, Biggie), who keeps him busy running to auditions.  Although he’s appeared in numerous films and stage productions, most of Joshua's roles have been dead bodies. But his attitude is unfailingly positive and he knows his big break is just around the corner. His life takes a strange turn, however, when he becomes the prime suspect in a murder case. Of course, any normal person would rush to clear his name. And Joshua would do just that if it weren’t for the fact that an audition beckons. Besides, he believes he can straighten out the misunderstanding by tracking down the real killer, himself.  As his investigation gets a little too close to the truth, his ex wife Randy is captured by a secret organization, and Joshua realizes that there are some things more important than career. He attempts to rescue her, not knowing the deadly consequences awaiting him and the rest of the world's actors.
Will Joshua be able to save his one true-love, Randy? Will he be remembered as the actor who played dead bodies, only to turn up dead himself?
Can he save Hollywood!" 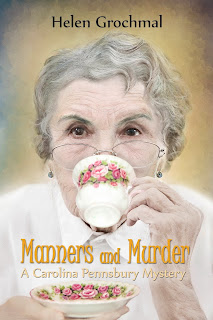 Retired librarian Carolina Pennsbury is quite content living in a retirement home.   She just wishes that her meal time tablemates felt as she did.  However, all seem to have their own complaints.  But those complaints are put on the back burner when one of the retirement home’s residents is stabbed to death in her apartment and the police arrest one of Carolina’s tablemates, Margie, for the murder.  Carolina, knowing her friend cannot possibly have committed such a deed, sets about to prove Margie’s innocence––a difficult feat for an elderly woman with a cane.  Knowing the real killer is probably still roaming the halls, Carolina uses her wits and her wit to investigate, and ultimately––after a fake fire alarm and a lengthy blackout––manages to ferret out the killer.  But clearing Margie and getting her out of jail is not the end of Carolina’s tasks.  She has work to do for all of her tablemates and she won’t quit until they are all happy. 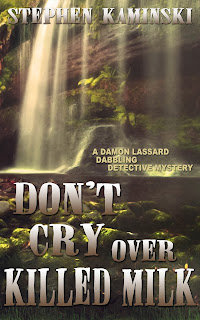 Jeremiah Milk lived a life filled with emotional extremes. Amniotic band syndrome—a congenital condition—left his fingers and toes malformed. Ridiculed as a child, he became an adolescent hermit. As an adult, Jeremiah’s wounds healed when he landed a position as a park ranger and married a woman who loved him despite his physical appearance. But fate ripped his life to shreds when his wife and infant son died on the same night in separate calamities. Shortly thereafter, the tides turned once more as an act of Jeremiah’s ostensible benevolence translates into a financial boon. The book on Jeremiah’s life closes without mercy when he’s found murdered at Tripping Falls State Park.

Damon Lassard—Hollydale’s loveable civic leader, amateur sleuth, and Jeremiah’s neighbor—springs into action. He’s obstructed by a prickly lieutenant, but wriggles information unknown to the police from a colorful bevy of suspects. Aided by his best friend Rebecca and his reluctant ally Detective Gerry Sloman, Damon engineers a deep dive into Jeremiah’s past to solve the crime. Along the way, Damon strengthens his relationship with the breathtaking Bethany Krims, cracks a local horticultural mystery, and tries in vain to tame his wickedly sarcastic mother.

Join Damon Lassard in his latest adventure, Don’t Cry Over Killed Milk.
Posted by Author Leanne Dyck at 9:00 AM