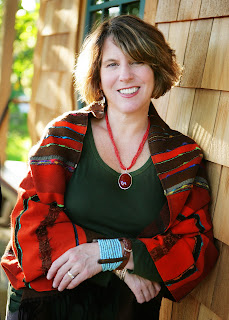 I never meant to be a writer.  The only things I knew about most famous writers were that they were unhappy, drank themselves into oblivion, and eventually stuck their heads in ovens, shot themselves, or got run over by streetcars.  Who would want to be a writer, if that's what happened to you?

I studied biology in college because I wanted to be somebody really useful, like one of those doctors who jets off to villages in Africa or Tibet to save thousands of lives.  Then, during my last semester of college, I took an elective class in creative writing.

From the moment I sat down to write, I became completely absorbed in my work.  Unlike my clock-watching sessions studying physiology and organic chemistry, whenever I was writing, seven hours could pass like seven minutes.  To the horror of my parents, I abandoned the idea of medical school.  I promised them that, if I didn't get to be rich or famous (preferably both) in one year,  I would let common sense rule and find a real career, something that required an advanced degree and letters after my name.  Something with a steady paycheck.

Of course, nothing happened the first year I was a writer, except rejections piling up in my desk drawer.  Nothing, that is, except that I knew I wanted to write.

As I became even more engrossed in the writing process, I did what all writers do to support my secret habit:  I worked a thousand odd jobs, from proofreading telephone books (really) to construction.

Along the way, I also earned a Master's in Fine Arts degree in creative writing at the University of Massachusetts in Amherst.  I made this decision because I had studied science all my life, and my knowledge of classic literature was sorely lacking.

Some of my graduate school classmates were talented, even brilliant writers, but not all of them became successful.  In fact, the most successful writers to emerge from my program weren't the flashy ones at parties or the award winners.  They certainly weren't the ones who sat around in pubs chatting about the cabins they would build in the woods with the advances from their first novels.  No, the success stories were the hard workers, the writers who spent a lot of time alone, churning out rewrites and new pages every week.  I was determined to be like them.
What was your first published piece?

The very first piece I ever published was a short story called “Kansas Heat” in a literary magazine called The North American Review.  I got paid exactly two copies.

I kept writing short stories but got nowhere with them.  And then a funny thing happened:  as I navigated the strange process of getting divorced and getting married again, all while trying to stay friends with my ex-husband, I read an essay by Joyce Maynard in Redbook magazine about being a single mom.  And I thought:  Hey.  I'd like to write something like that.  So I did, in response to a literary contest.

To my surprise, I won an award in the contest.  This gave me the courage to pluck the name of an editor off the masthead of Ladies' Home Journal magazine and send it to her.  The editor bought it—for more money than I ever imagined making as a writer!

I sold more essays to Ladies' Home Journal, which led to assignments for other magazines.  Working as a freelance writer allowed me to exercise my voice as a writer.  Now I write for a variety of magazines and work as a book doctor and ghostwriter for celebrities.

After finishing my MFA, I meandered into journalism, marketing, and teaching jobs to support my writing habit.  Most were enjoyable, but none were as deeply satisfying as writing on my own.  I kept at it, filling up the corners of my life and lots of paper with words and more words.  Every now and then I sent something out and got rejected.

I got married, had children, got divorced, got remarried, had another child.  I worked, too.  All of that took time.  A lot of time.  Still, I kept writing:  at night after the kids were asleep, on weekends at the playground while my kids were eating sand.  Years slipped by with nothing published other than a couple of literary stories and a few newspaper articles, but I was happy.  Writing became my escape--not away from my life, but into myself, in a life where family responsibilities and work deadlines tried to jimmy themselves into every free minute.

All of that work served as training for writing my memoir, The Gerbil Farmer's Daughter, which I sold to a division of Random House on the basis of a proposal.  It also kept me going while I honed my fiction writing skills.

This may sound odd, but for my new novel, Sleeping Tigers, I was inspired by having breast cancer and facing up to my own mortality.  Like my main character in this novel, I was lucky to have caught my cancer in the earliest stages.  However, like everyone who struggles with a frightening medical diagnosis, having cancer also taught me important lessons about opening my heart to new opportunities for love and laughter.

When all is said and done, writing is communication between people who put words on the page and people who read those words.  Making personal connections with other writers and readers is key to your success as a writer, whether you do that through book signings, book clubs, blogging, or helping out other writers with their projects.

If you want to be a writer, open your heart to the muses who surround you, and the words will never fail you. 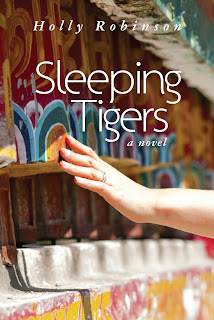 Jordan O'Malley has everything she ever wanted: a job she loves, a beautiful home, and a dependable boyfriend.  When her life unravels after a breast cancer scare, Jordan decides to join her wildest childhood friend in San Francisco and track down her drifter brother, Cam, who harbors secrets of his own.
When Cam suddenly flees the country, Jordan follows, determined to bring him home.  Her journey takes her to the farthest reaches of majestic Nepal, where she encounters tests—and truths—about love and family that she never could have imagined.
Funny, heartbreaking, and suspenseful, Sleeping Tigers reminds us all that sometimes it's better to follow your heart instead of a plan.