Everyone in this book is using someone, but no one does it more frequently or to such a degree as narrator Korede's sister Ayoola.
Ayoola is self-absorbed but is she capable of murder? Is Ayoola a serial killer? It's a mystery Korede doesn't want to solve.

From the time Ayoola was born, Korede has been made to feel responsible for her sister. So she will clean up her sister's "murder" and help hide the body but she won't bring her sister to justice.

In fact, Korede attempts to convince herself of Ayoola's innocence. She blames the "victims" and even the "murder weapon".


'For some reason, I cannot imagine her restoring to the stabbing if that particular knife were not in her hand; almost as if it were the knife and not her that was doing the killing. But then, is that so hard to believe? Who is to say that an object does not come with its own agenda? Or that collective agenda of its previous owner does not direct its purpose still?' (p. 36) 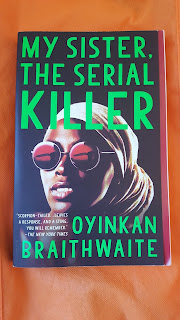 Published by Anchor Books
A Division of Penguin Random House Inc.
Published in 2018

This gripping darkly comic thriller is perfect for a "challenged" reader with its easily digestible short--one to four pages--chapters. The chapters are so short, in fact, that some readers may be tempted to speed read. But doing so is unwise because transitions are subtle and information is provided sparsely. And you don't want to miss any of the twists and turns.

Braithwaite utilizes a clever means to convey backstory--Korede confides in Muhtar (a man in a coma).

Set in the city of Lagos, My Sister, the Serial Killer is a culturally rich book and I enjoyed visiting Africa from the comfort of my reading chair. 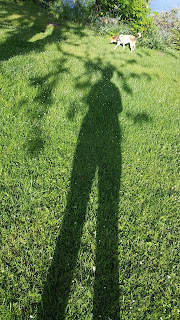 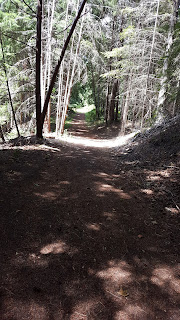 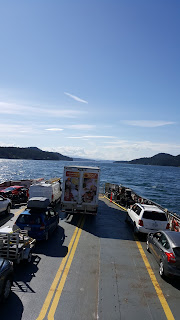 photo by ldyck
Leaving July with...
A Smile
I offer this smile to you
But you can't keep it
It belongs to the world
Pass it on
Sharing it makes the world rich
Posted by Author Leanne Dyck at 4:30 PM