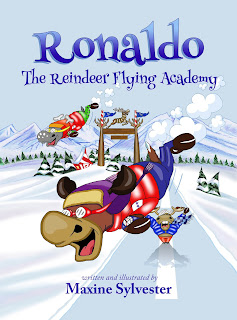 "A NEW SHERIFF IN TOWN" and the name is "Ronaldo”

Ronaldo is a young flying reindeer cadet who someday dreams of becoming one of Santa's reindeer, just like his hero, Vixen. With the love and support of his friends and family and the great advice of his grandpa, he can face his greatest challenge yet, the Endurance Challenge. Ronaldo doesn't have a "traditional" reindeer name (like Dasher) so he faces some bullying from his peers. In the end, this little underdog gets to be a big-time hero. And despite all his slap-stick humour style clumsiness he gets to enjoy his success with pride.

1) How/why did you start to write?

I wanted a reason to illustrate; so I created a character; a young reindeer called Ronaldo and decided to write a short story about him going to flying school. Only thing was, once I started writing, I couldn’t stop! It turns out I had quite an imagination (courtesy of a lifetime of watching Disney movies). I now love writing as much as illustrating and enjoy flitting between the two. I feel my strengths are illustration and imagination, not grammar, so I use a professional editor on all my books. A good one is worth their weight in carrots.

2) How did you become an author?

In a very long-winded way! I loved art when I was younger but got sidetracked by travel. In my teens, I abandoned a career in art to work in Greece as a travel representative. I then sailed the ocean waves working in the gift shop and casino onboard cruise ships. I loved the exotic destinations but found my work uninspiring. I met my partner Mark onboard and after 10 years on ships, we decided to try our luck on land and accepted positions at a casino in Jericho, Palestine. It was a fascinating project but after two years the casino had to close due to political unrest.

Mark accepted a job in Moscow so we left the desert heat and relocated to minus 20 degree winters. By this time I had become very disillusioned with work. I never enjoyed any job I did and felt like I had missed my calling in life. I must have been a nightmare to work with as I never stopped moaning!

In Moscow, I took time out and went back to my roots – art. I enrolled in The College of Cartoon Art and was mentored by British cartoonist/caricaturist, Steve Chadburn. I then did an additional course in children’s book illustration. My passion for art was still there just like when I was a child and I was drawing round the clock and loving every minute.

Mark eventually decided to quit casinos and bought into a scuba diving business in Bali. This is where we are now and it’s where I wrote my first book.

3) What was your first published piece? Where was it published? How long ago?
I self-published the first book in the Ronaldo series, The Reindeer Flying Academy, three years ago on Amazon. I followed up with The Phantom Carrot Snatcher one year later. The third book in the series, Rudi’s Birthday Extravaganza, was published last month.

Reviews have been amazing. I am so grateful to everyone that reviewed my books; the comments have been so positive. A few reviewers for The Reindeer Flying Academy mentioned they would have preferred colour illustrations, so I took the advice onboard (important to listen to your readers!) and am now adding the final touches to the colour version. I am looking at publishing a colour edition of The Reindeer Flying Academy in November, ready for Christmas. I think children are going to love the colour illustrations. I had such fun bringing the characters to life. Thank you, reviewers, for your suggestions!

You can check out the first chapter of The Reindeer Flying Academy (colour edition) on the Ronaldo website.

4) Reflect on your writing process
I usually have an idea in my head and write notes each day as if I don’t write them down I forget. I tend to think of funny incidents that have happened to me or my friends over the years and weave them into the story.  I then sit at my computer and write. I do a very rough draft. I then find that once I get into writing more ideas keep flooding into my head. Sometimes I can’t sleep at night because my head is buzzing with ideas. I then fine tune the manuscript until I am happy with it. The last book, Rudi’s Birthday Extravaganza, took about one month. I then forward the book to my editor and wait for her comments. All three books have taken three edits.

I remember my first book, my editor pointed out that there were no strong female characters in the story, something publishers are very hot on at the moment. I am not a very girly female; I love football and rock music, so I naturally put male characters into the story. After careful thought, I changed Wing Commander Blitsen to a female and it totally changed the dynamic of the book. Now I can’t imagine her any other way.

5) What did you do before embarking on your writing career? Was it an asset to your writing?

My last job was as a Pilates instructor and it’s one of the best things I ever did. I’ve had back problems over the years and Pilates strengthens the muscles that support the spine. It’s brilliant! The body isn’t designed to spend long periods sitting at a computer, so I practice Pilates three times a week. I wouldn’t be able to write and illustrate without it. So, in answer to your question, Pilates is an asset to my writing.

I also did a lot of jobs over the years which I didn’t enjoy, working if shops, casinos, offices, etc. I don’t think I would appreciate what I do now as much as I do if I hadn’t have done those jobs. I really love being creative and am so grateful to have found a career that brings me such joy.

Inspiring people! I love biographies about people I admire. I recently read a book about Walt Disney. He had so many setbacks but just kept going. I also love that he wasn’t perfect and made mistakes. He was a creative genius and had an incredible belief in himself. Disneyland is my favourite place on earth and it came from his vision.

I also love Dolly Parton’s attitude towards life. She’s renowned for being a very smart businesswoman, but her humour always shines through and she never forgets where she came from.

If ever I feel down, I read Dr Wayne Dyer. He had a difficult childhood but never doubted his books would be published by the right people and at the perfect time. I find his words caring and inspirational. I think he’s an essential read for any self-published author.

7) Please share one of your successful author platform building techniques

I am very fortunate with social networking as my partner, Mark knows way more about it than me! He has helped me so much over the last three years. As a self-published author, it is essential to get reviews. Mark found Twitter a very useful platform for finding people kind enough to review my books. He looks for ‘book bloggers’ and ‘book reviewers’, reads their reviews, checks if they have reviewed children’s books before or if they have children themselves, and then decides whether to request a review or not. That is the short version he said. 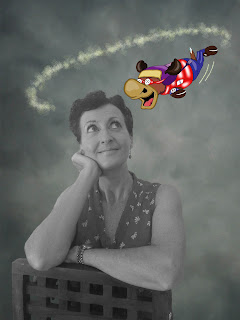 Maxine Sylvester was born in London, England. She grew up with a passion for Winnie the Pooh and Paddington Bear. She also loved anything Disney and enjoyed drawing the characters.
Maxine's love of 'fun' art grew and she had the privilege of being mentored by cartoonist and caricaturist, Steve Chadburn. She completed further studies in children's book illustration with talented artist and illustrator, Jan Nesbitt.
Rudi’s Birthday Extravaganza, the third in the Ronaldo series, was released 29th Sept 2017. She is now working on a colour version of The Reindeer Flying Academy in time for Christmas