Book review: The 100-Year-Old Man Who Climbed Out the Window and Disappeared by Jonas Jonasson

I found this book at my local library (wait for it) 's  book sale. No, I didn't buy it new. Buying second-hand allowed me to take a risk on an unknown author. I didn't know the author, but I had heard of the book. It was recommended to me--well, not just me. I attended a talk on how-to write humour and during the Q and A, the presenter was asked what book he would recommend.

"Well, beside my own, The 100-Year-Old Man Who Climbed Out the Window and Disappeared."

The book opens with the 100-year-old man climbing out a window--of course. And I was immediately drawn into the story, because I wanted to know why a 100-year-old man would climb out of a window. 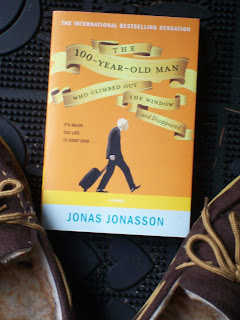 'The 100-year-old man set off in his pee slippers (so called because men of advanced age rarely pee farther than their shoes.)' (p. 4)

Beyond the climbing out of the window part, this story is in no way predictable. A 100-year-old is expected to celebrate his age and die; protagonist Allan doesn't celebrate and lives.


Title:  The 100-Year-Old Man Who Climbed Out the Window and Disappeared

Translated from the original Swedish by Rod Bradbury

Author bio:  Jonas Jonasson is a former journalist and media consultant. He lives in Sweden.

Book blurb:  After a long and eventful life, Allan Karlsson ends up in a nursing home, believing it to be his last stop. The only problem is that he's still in good health, and one day, he turns 100. A big celebration is in the works, but Allan really isn't interested (and he'd like a bit more control over his alcohol consumption). So he decides to escape. He climbs out the window in his slippers and embarks on a hilarious and entirely unexpected journey.

It would be the adventure of a life-time for anyone else, but Allan has a larger-than-life backstory:  not only has he witnessed some of the most important events of the twentieth century, he has actually played a key role in them. Quirky and utterly unique, The 100-Year-Old Man Who Climbed Out the Window and Disappeared has charmed readers across the world.


Jonasson doesn't concern himself with convention. He rarely uses quotation marks, preferring hyphens. He takes detours to follow minor characters, whenever he feels so inclined. And he is rather lazy when it comes to crafting transitions...


'The following hours of Bellringer Farm developed as follows' (p. 231)


The story is written in a just-the-facts-ma'am style. After all, Jonasson was a journalist. As a writer, I found it fascinating to read an author whose style is vastly different from my own. As a reader, I found this style frustrating. It was hard to get to the meat of the story--difficult, but not impossible.

This story spans one hundred years and the setting varies from Europe to Asia to North America to the southern hemisphere. The pages are populated with characterized versions of important historical figures. The humour is tightly interwoven into the plot and serves to make this book endearing.

About my next post...
Monday night (February 29th), I (will/am) attending a CWILL (Children's Writers and Illustrators) panel discussion. Here's what I learned last year (link) After attending that discussion, I wrote 15 picture book manuscripts. Who knows what will happen this year.
I'll share what I learn in my next post. (published at approximately 5 PM on Sunday, March 6th)

If you don't write, you may be surprised to hear that sitting in a


chair, staring at a screen is exhausting.
If you've never written a novel, you may be surprised to hear that sometimes it's as important to disassemble the novel in progress as it is to assemble it.

What did I accomplish this month?
I wrote two picture book manuscripts.
I made 9 submissions (all picture books). That's a tie with February 2014 (total of 9) and up one from February 2015 (total of 8).
I hope you'll stayed tuned logged on to find out what happens in March.