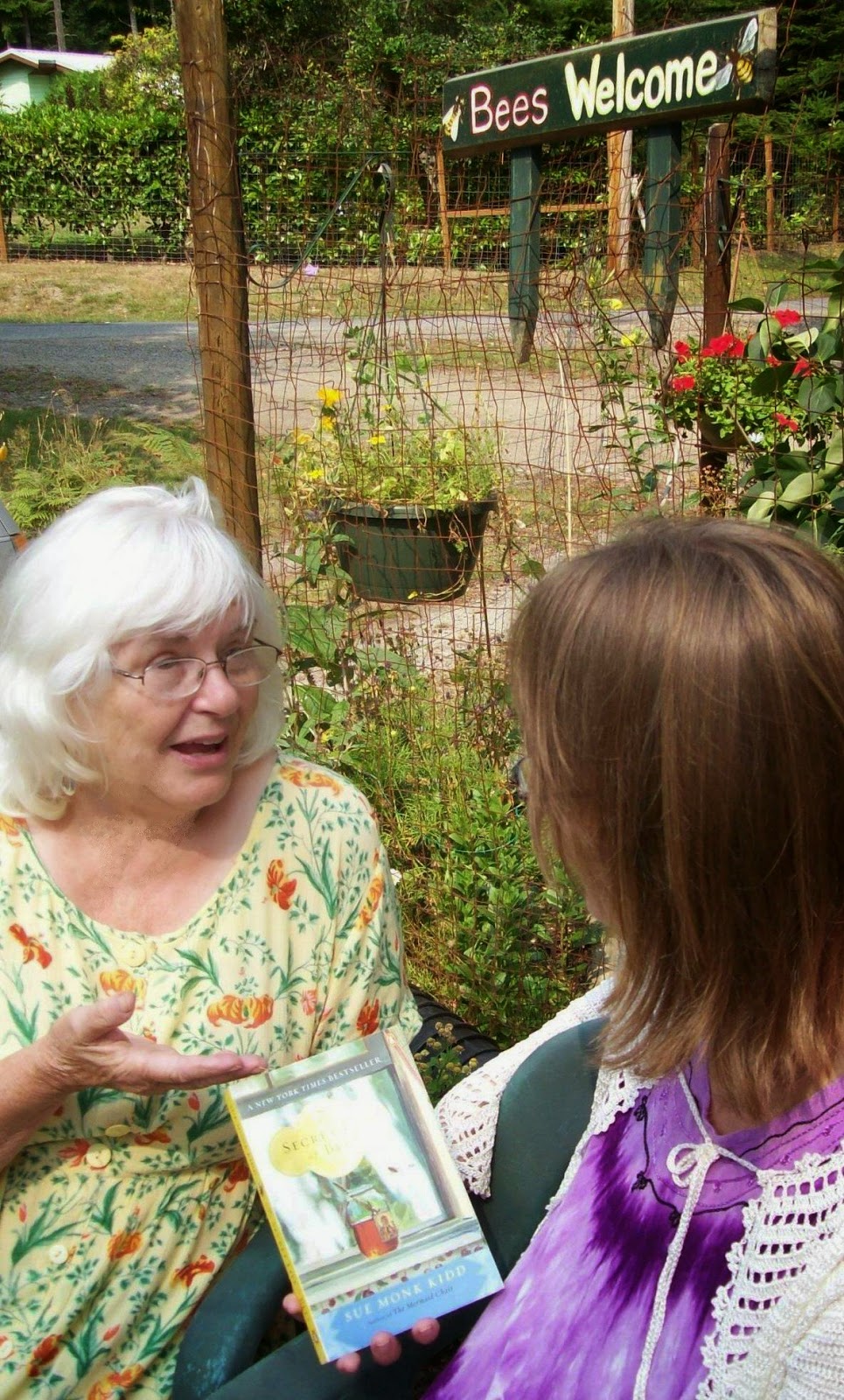 My friend and fellow author, Amber Harvey, recommended that I read The Secret Life of Bees and lent me her copy.

Buy The Secret Life of Bees

Blurb:  Set in South Carolina in 1964. The Secret Life of Bees tells the story of Lily Owens, whose life has been shaped around the blurred memory of the afternoon her mother was killed. When Lily's fierce hearted black "stand in mother", Rosaleen, insults three of the deepest racists in town. Lily decides to spring them both free. They escape to Tiburon, South Carolina--a town that holds the secret to her mother's past. Taken in by an eccentric trio of black beekeeping sisters. Lily is introduced to their mesmerizing world of bees and honey, and the Black Madonna. This is a remarkable novel about divine female power, a story that women will share and pass on to their daughters (or younger friends) for years to come.

These are the fragments I left behind as I read--thoughts, comments, questions, quotes--reflections on what I read.

Sue Monk Kidd doesn't start the story with details about Lily's mother. Instead Lily tells us about the bees, introduces us to Rosaleen, and talks about her relationship with her distant father. We get to know and like Lily first and then she tells us about how her mother died. This way, when we hear, we are upset because by that we truly care about Lily.

'This is what I know about myself. She [my mom] was all I wanted. And I took her away.' (p. 8)
I can't believe Lily's father is actually telling her that she shot her mother. How low can you go? What a burden to lay on your own flesh and blood, on your own child. Especially when clearly it was him that shot her. Of course, I don't know this for certain. But he does have an uncontrollable temper and his wife did make him angry and he was holding the gun. Or, at least, that's what I remember reading. And T. Ray continues to stain Lily's life with physically and emotional abuse. In fact, his abusive treatment of her has become so common place that she has begun to view it as normal.

'The door closed. So quiet it amounted to nothing but a snap of air, and that was the strangeness of it, how a small sound like that could fall across the whole world.' (p. 33)

If you don't have anyone special in your life or if you think you don't, you long to fill the void. And yet Rosaleen has acted like a mother to Lily. It's plain they care about each other. Yet for Lily that's not enough. And so she sets out on an adventure to find someone who knew her mother--she sets out on a journey to gather the fragments that her mother left behind.

I'd never considered what my characters are carrying as tools for story development, before--clever idea.

This book is reading more and more like a mystery.

May, June, and August are such fascinating characters. I long to learn more about them and to explore their property. What is that low fence for and why are pieces of paper stuck into it?

Is August the queen bee?

Page 226 such a beautiful ritual.

August is the perfect person to remove the lies from Lily's world and replace them with truths.

Four women ushering a girl into the sisterhood of women.

'Mary did not need to be hundred percent capable all the time. The only thing I wanted was for her to understand.' (p. 258)

Learning that your parents aren't as prefect as you believed they were is part of growing up.

'[N]o matter how much you thought you could leave your mother behind, she would never disappear from the tender places in you.' (p. 273)

So many beautiful images in this book. Sue Monk Kidd truly knows how to paint with words.

August about Mary (Madonna) ' "When you're unsure of yourself,...when you start pulling back into doubt and small living, she's the one inside saying. 'Get up from there and live like the glorious girl you are.' She's the power inside you, you understand?... And whatever it is that keeps widening your heart, that's Mary, too, not only the power inside you but the love... Not just to love--but to persist in love." ' (p. 299)

In the back pages of his book there is a reader's guide and an interview with the author. It was fascinating to discover how Sue Monk Kidd worked on this novel. It started out as a short story. She was overwhelmed by the idea of transforming that story into a novel and so employed techniques such as collaging. Read The Secret Life of Bees cover to cover--you'll be glad you did. 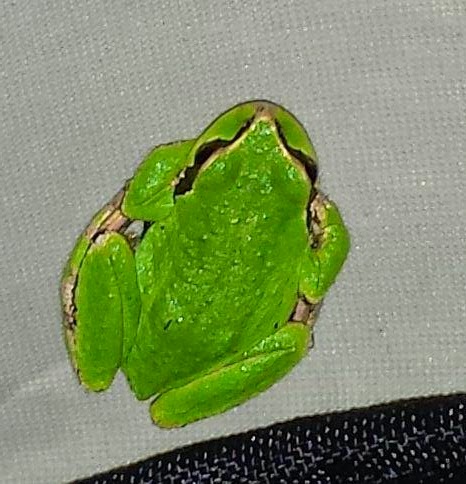 "This is a tree frog. Ain't he cute?"
Photo by Byron Dyck

Who knows when inspiration will strike and from what direction?

Then...
A couple of months years ago, I had an interesting talk with an author.
"I like to write short stories," I told her.
"You should submit them to literary journals," she said. "They especially like it when you write to their theme."
"I could never do that. I don't want to fork over that much control of what I write about."

Now...
I was innocently reading a literary journal and came to the 'in future issues' page. Wow, what an interesting theme, I thought and my pen wouldn't stop moving--yield one approximately 1,100 words short story. 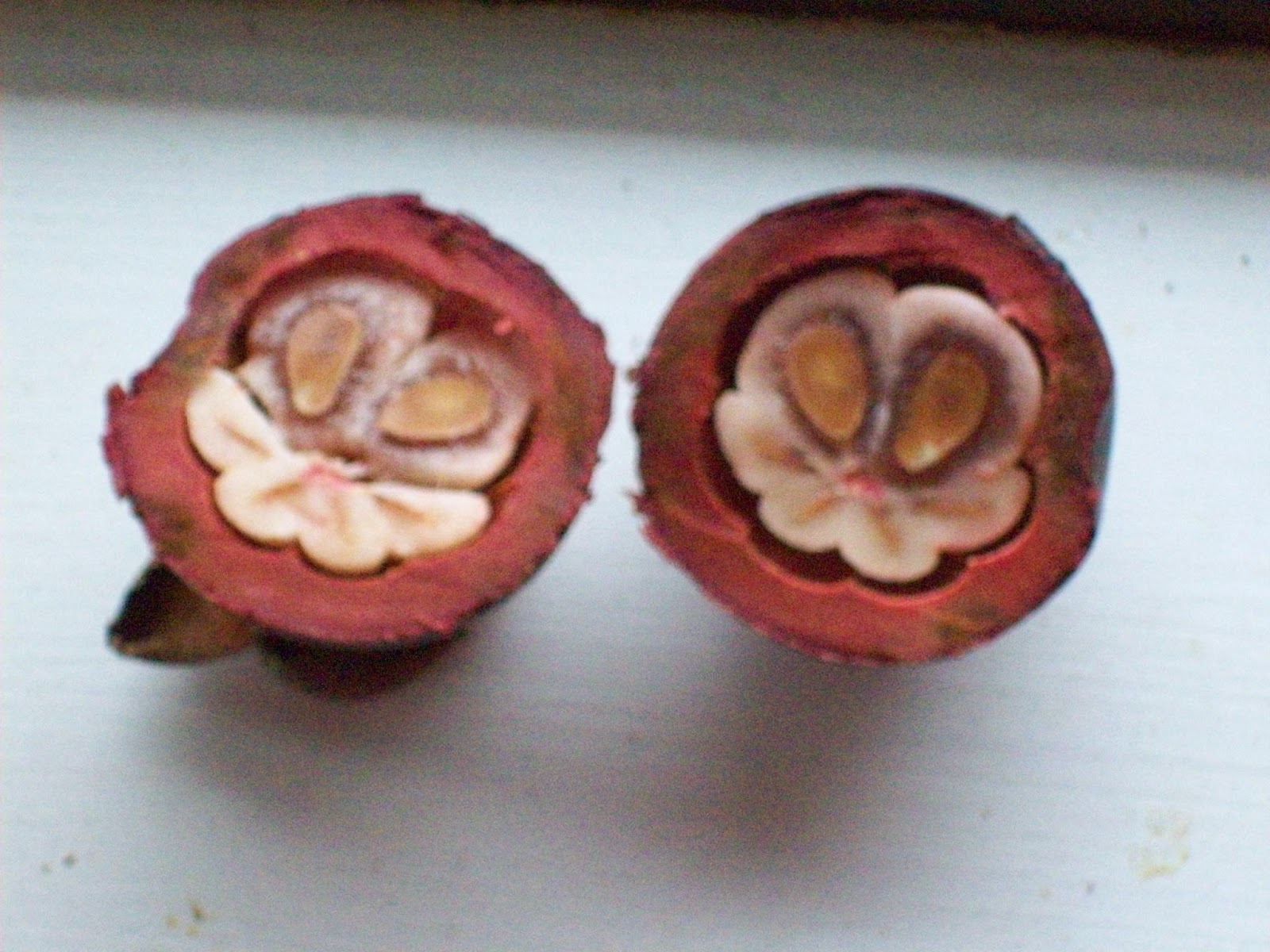 "And this is... mystery fruit."
Photo by Leanne Dyck

Posted by Author Leanne Dyck at 8:41 AM