Have you visited Adrienne Kenman's blog--Mints in my Mother's Purse? Well, you need to. Trust me. (Laughter is the best medicine.)  But not yet... Please visit with her here, first... 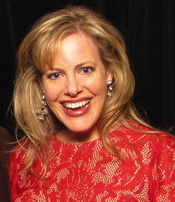 Last week, a reader accused me of being a navel gazer.
At first I got all “horror movie” and thought she was peering through my window because I do happen to glance at my stomach quite frequently. I like to be in tune with how far it might be protruding. In my defense, I was once pregnant with twins. For six months of my life I was nothing but a navel. You don’t easily get over something like that.
This particular reader disliked my Cardinal Rue post. It was barely a post, really, just a few words describing a melancholy moment where I missed my mom. I mentioned a red bird and some bushes. Apparently the reader does not like birds. Or mothers. Or people who write about birds and mothers. Oh, how my “drivel” offended her. After bashing me in the head with inappropriate words, she called me fat. Or I thought she did. It was hard to tell with the concussion and all. But when the stars cleared, I realized “navel gazing” was a legitimate literary term invoking the cute little belly button of all things. Being a literary type myself, I looked it up.
It turns out navel gazers are “Eastern mystics who stare fixedly at their own navels to induce a mystical trance.”
Meangirl thinks I’m a mystic? Well, I’m game. I contortedly concentrated on my core, but all I induced was a crick in my neck and crossed eyes. The navel is a pretty awkward place in which to dig for enlightenment. The whole thing didn’t seem very literary-like so I kept looking.
A little more research and I got it. A navel gazer is … a blogger. A narcissistic, indulgent blogger who glorifies his life excessively in bursts of purple prose with no regard to proper vocabulary or sentence structure. A blogger.
Literaturely speaking (yes, I made up that word; my umbilicus told me to), navel gazing refers to the writer’s idea that his belly button is the absolute best and brightest in all the land and everyone will want to immediately drop their copies of Dostoyevsky and read all about it in 140 characters or less; or better yet, in fuzzy detail on his award winning blog, The Ins and Outs of Abe Domen.
The concern among literates is that the resulting lint buildup will “dumb down” the process and product of the writer and, by default, the reader. In other words, Abe is destroying the world as we know it.
Well, maybe changing it a bit.
Consider that the average reader reads at a seventh-grade level. If he spends his designated reading time climbing the posts of Social Media, there’s a good chance he might not even reach that seventh-grade rung, let alone anything above it. What standard for reading and writing is being developed?
Let’s carry the concern up another flight of stairs. Amazon is shuttering our bookstores, gadgets are replacing the rustle of pages, and the Great American Novel is suffocating beneath this week’s trending compilation of essays currently topping the Best Seller List.
The grumbles all sound a bit valid when I put them in my own words, the ones I found scrawled on my tummy.
But they also sound a reminiscent of the worries wrought when the radio, television, and Information Superhighway first appeared.
So do we need to build a better lint trap?
Don’t know. My stomach’s growling (I checked) and Shorty, my roving attention span, just found a recipe on Pinterest I’m dying to try. I’ll post a pic of my dinner on Facebook and tell you all about my full and happy tummy in my blog, mintsinmymotherspurse.blogspot.com
Posted by Author Leanne Dyck at 9:00 AM