(continued from an article posted on this blog on July 25th) 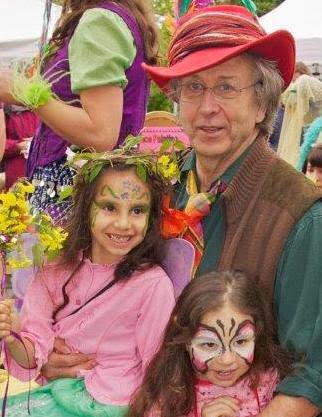 Joel Harvey with his granddaughters

During the Clayquot Sound anti-clearcut protest (summer 1993) I noticed thick mists of sympathy for First Nations wisping around, but these mists evaporated easily at talk about how those ancient forests could provide jobs for native loggers rather than corporate ones. So I helped to put together a First Nations / environmetalist conference at UVIC, and was kvetching over coffee to North Island Chief Francis about how much static I had to endure from government officials, consultants, and environmental activist folks, just for suggesting that First Nations views needed to be heard - from themselves. He commiserated quietly with "You suffer a lot that way?" Much much later, his centuries deep irony hit me.

At a circle meet for the South Island Treaty table, having been invited as a witness, in the initial round of intros I said I was not sure exactly why I was there. Chief Bill (well known then for his punchy "we should have killed you all" quip) grinned and gruffed - well why are you here? ( 'here' obviously taking in all of North America).

Later, a high point was hosting Nisg'a folks, especially Chief Joe Gosnell, for the grand treaty signing ceremony at the Legislature. On 2 Dec 1998 Chief Gosnell, in majestic red and black traditional regalia, made an all-Canadian greatest speech at the bar of the legislature, reminding BC how far we have come since 1887 when Premier William Smithe told aboriginals from northern BC their land-claims were meaningless: “When the white man first came among you, you were little better than wild beasts of the field”. Gosnell summarized the progress: "Under the treaty we will no longer be wards of the state, no longer beggars in our own lands."

It was an honour to watch his immense civility and negotiation skill, and then help nominate him for the Order of Canada, which he received about the time the redneck backlash (``One Law fer All`) in BC started. Out of these negotiations came one charming leaked comment about loss of "our" forest access from a Forest company exec: "I suppose there is no need for Natives to worry about tomorrow, the government will always look after them. They see it as today's lifestyle being better than yesterday's. Proof that white people owe them something."   The backlash was also expressed in the Campbell government's attempt to nullify the Nisga Treaty in court. That case was dismissed then. Campbell tried again with an absurd, expensive treaty referendum (2002) - which failed as well.

While that treaty may be a model for others to come, a recent attempt to nullify it was initiated - and lost - by a group of Nisga citizens, unhappy in their own way about the whole thing. Can't life be hard, and unfair, sometimes?

The BC Treaty Process, too, has not been productive, running into constant roadblocks, more government 'studies', etc,etc. In 2013, there are just 3 done treaty deals out of over 50 First Nations in BC, many now opting to risk more court action rather than rely on the process.  Recently the Commissions' chief commissioner, Sophie Pierre, pondered  “If we can't do it, it's about time we faced the obvious – it isn't going to happen, so shut 'er down.”, though she is staying on - with hopefulness - for another term. Locally, the Hul'qumi'num (South Island) Treaty Group  process has been stalled for years. This group has taken a complaint against BC & Canada's insincere, obstructionist approach to an international tribunal  (Inter-American Commission of Human Rights). Now, whoever might have suggested such a thing?

And so, things keep on moving on, and from what I can see some have got much better over 20 years (in business, media, education,  attitudes, even activist collaboration). But while 'retired' in a tranquil rural island hideout, I know there's way longer to go, even when there are so many other places to shine our care. All us many real heroes and leaders,  allies, sympathizers, supporters, letter writers, well wishers in government and out, on reserve and off, and those just interested in artistic works, seeking authentic spirituality, collecting bits of lore, curios and dreamcatchers, or even cool native place names  - dear gentle hearts - can we just keep on pushing more in our own small ways?

Your journey may be like mine, you may not be fast but you are slow, learning very late about the nasty-shadowy-mindless easily enraged beasties that still snooze lightly in the culture out there. I probably should have paid that $10 to get the lowdown early in life. Ahead there remains serious deprogramming of 2 centuries of Imperial tinged religion, paternal land acquisitive legalism and repression, cartoon injun stereotyping ("they" are so spiritual, cute/exotic/wasted but noble - and almost extinct or assimilated).  Like, "we" are not yet out of "our" own swampy woods. So that 'we' may continue moving - being non idlers - and maybe challenge ourselves, not be dumb as rocks about this stuff, I offer suggestions from my own encounters:

·          "A Long and TerribleShadow" (1990), a relentless look at our real history, by former BC Supreme Court Justice Tom Berger (Swedish/All-Canadian).
·          "The Orenda" (2013) by Joseph Boyden (Anishinnabe/Scottish), a fictional history of early Canada, on personal impacts of devastating native wars and spiritual clashes (at the library).
·         "The InconvenientIndian" (2012) by Thomas King (Cherokee/Greek), of CBC's Dead Dog Cafe, for sparkles of wit and good dark storytelling (laughter along the trail of tears), a fun and crisp de-mything read  (at the bookstore and library).
·          "First Nations and theFuture of Canadian Citizenship" (2013, CBC.CA/Ideas, Search: Ideas Atleo), Massey Lecture by Shawn Atleo (Ahousat/National Chief AFN). Our Precious Lives and Founding Relationships, Past Disasters, Work Ahead. Could you need more Clarity?
·          "Peace, Power,  and Righteousness" (1999) by Dr. Taiaike Alfred (Mohawk), toward a truer moral calculus for our land, that even newcomers can follow. Showing a people's ancient deep and sure dignity, that newcomers can also aspire to.
·          "They Called MeNumber One: Secrets and Survival at an Indian Residential School " (2013) by Chief Bev Sellars (Xat'sull/BC), Unsparing stories of women in BC residential schools - genocide, eh? say no more. Preface by Chief Bill.
·          "This Ragged Place" (1998) by Terry Glavin (Cannuk/MayneEscapee), Essays on awesomely crazy BC, especially Native & Forest Issues, the Fisheries Fracas.
·          "First Nations?Second Thoughts?" (2002) by Dr. Tom Flanagan (Wildrose/Yankee), background philosophy and arguments for the Harper Government's nouveau assimilationist, market-on-the-cheap-solutions,  Alberta-Oil Rampant. Like? UnFriend??
·          Some links (including these books at Amazon) and references (& your comments?) on my (Clan Keith/Geek) own rough, evolving topical aggregator web site  (IdleWatch.MayneHome.Net).

My point: Who was Idle? Is Idle Now? Me? So Many others? You? How much is enough?

While we've yet to see the noonday brilliance of a Nelson Mandela's (Madiba) smile to guide our way on, this agelong struggle continues within us, and without us.  Peace.

Dec 2013. Thanks to the writing group - Amber, Leanne, Catherine, Gail, David - for listening & helping to coax this peice out of me, unplanned as it was, unperfected as it may stay. I should add - thanks to Annette for organizing that initial IdleNoMore event , and to Bill for provoking my interest in writing a short note about it and giving a few gold stars for style. Then it grew.

(For more information regarding this Joel's article please visit his web site.)
Posted by Author Leanne Dyck at 9:00 AM