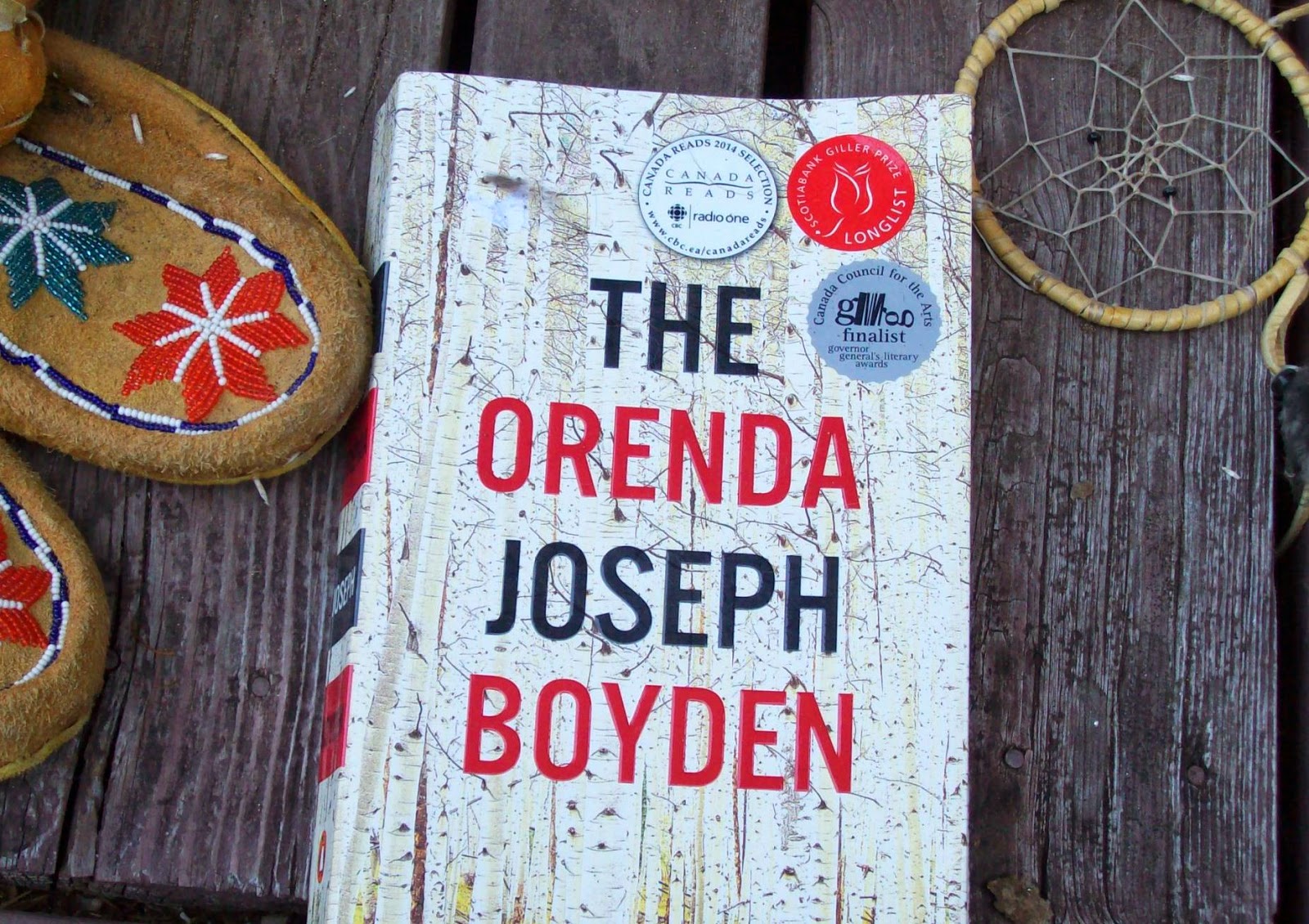 Front cover blurb:  The Orenda opens with the kidnapping of Snow Falls, a spirited Iroquois girl with a special gift. Her captor, Bird, is an elder and one of the Huron Nation's great warriors and statesmen. Although it's been years since the murder of his family members, they're never far from his mind. In Snow Falls, Bird recognizes the ghost of his lost daughter; he sees that the girl possesses powerful magic, something useful to him and his people on the troubled road ahead. The Huron Nation has battled the Iroquois for as long as Bird can remember, but both tribes now face a new, more dangerous peril from afar.

Christophe does not see himself as a threat, however. A charismatic Jesuit missionary, he has found his calling amongst the Huron, devoting himself to learning and understanding their customs and language in order to lead them to Christ. As an emissary from distant lands, he brings much more, though, than his faith to the new world.

As these three souls dance one another through intricately woven acts of duplicity, small battles erupt into bigger wars, and a nation emerges from worlds in flux. Powerful and deeply moving, The Orenda traces a story of blood and hope, suspicion and trust, hatred and love. A saga nearly four hundred years old, it is at its roots timeless and eternal.

Tons of people have warned me that this book is very violent. (I don't know, I guess I look particularly fragile.) But I decided to disregard these warnings.
Why?
Well... I'm a fan of Joseph Boyden. In fact Three Day Road got me through a bout of shingles. So you see, I owe him.
And also... The Orenda is a winner Canada Reads 2014 Selection
So you see, I had to read this book...

Snow Falls:  'Wolves can't live on berries and twigs, after all, and their viciousness is what allows them to keep going, and will allow those who will one day follow to do the same....
It's a big decision, isn't it? I can hear your voice asking it, Father. Do I grow up to become a deer? Or do I grow up to become a wolf?' (p. 50)

I love the humour contained in this book. Clearly Christophe means 'live' instead of 'die' but his limited knowledge of the Wendat (Huron) language forces him to make this mistake. Yet he arrogantly believes that he has a gift for languages.

It overwhelms me, the cruelty that man can inflicted on man, because of desire.

The chapter titled I Saw You, Lord ends on such a sad note because we, of course, know that Bird is right.

I like how Boyden recounts a scene through the eyes of more than one character. I thought such a treatment would seem redundant, but it doesn't--not at all.

The French send young priests to 'civilize' the dwellers of the harsh land. But Iroquois greet them with arrows and sink their canoes. Are we meant to rejoice--the land remains out of their clutches?
Yet more and more of the Huron are listening to the priests. Will they turn from the old ways?
Of course, we know they will. It's only a matter of time.
I wonder how different things would be if they hadn't? Would I be here? Would there be a country called Canada? Would our Prime Minister be Huron (Wendat)? What version of history would be taught to our children?

Magic is alive in Gosling.

I think Joseph Boyden is using a balanced approach to recount the days of first contact. Instead of painting the priests as bad and the native warriors as good, he rises above such pat conclusions to fairly represent both.

I'm touched by the simplicity and love expressed on pages 380 and 381.

Is He Finds Villages (Aaron) symbolic of the natives who were so willing to embrace the white ways that they lost their own way?

The present tense is especially effective during the battle scene. It heightens my tension, making me feel like I'm right there. And I read on...

I'm very impressed by Boyden's ability to tell this story using three narrators. I, the reader, never get lost. And Boyden doesn't use the technique I would employ--labeling the chapters using the character's name. There's no need, I know the characters so well that I easily identify who is speaking.

Christophe's strength and his devotion to his faith can be clearly seen in the chapter titled The Stolen Fruit.

Inspired by this story I write...

Orenda
I walk with respect, thoughtfulness, and kindness
on Turtle Island, my mother Earth
Orenda

Guest post Friday:  Who Me Idle? by Joel Harvey

One of my favourite shows is Last Comic Standing Being a stand-up comedian has to be one of the hardest ways to make a living. And they all deserve to win simply because they are so fearless. There are so many people I'm pulling for Lochlan (because he's Canadian) and Nikki Carr (because she's the only woman) but I think the winner will be Rod Man.
Becoming a stand-up comedian is not something I aspire to. I like to make people laugh with my writing not my reading. Yet this Friday, on Mayne Island, during a comedy night, I will stand on stage, read a funny story and hopefully someone will laugh. Wish me luck.