Author Bio:
Ayelet Tsabari is an Israeli of Yemeni descent. After growing up in a suburb of Tel Aviv, she travelled extensively throughout South East Asia, Europe and North America before moving to Vancouver in 1998. Tsabari adjusted to writing in her second language, and studied other ways to tell stories through film at photography in the Capilano University Media Program. She directed two documentary films, one of which won the grand prize in the Palm Spring International Sport Film Festival. Tsabari wrote her first story in English in 2006. She is a two-time winner of the EVENT Creative Non-Fiction Contest and has been published in literary magazines such as PRISM, Grain and Room. Her unpublished non-fiction manuscript was shortlisted for the First Book Competition sponsored by Anvil Press and SFU’s Writer’s Studio. She is a graduate of the MFA in Creative Writing Program at the University of Guelph and now calls Toronto home.


Interesting facts:
* Ayelet was a soldier in the Israeli army.
* English is Ayelet’s second language and she wrote her first story in English just six years ago.
* Ayelet is married to a sailor. 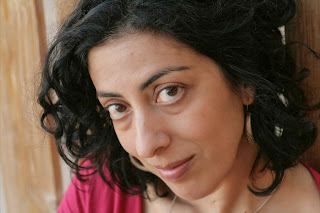 I was telling stories before I could write. I used to draw comic strips and narrate them to my mother. As soon as I knew the alphabet I started to write stories and poems, so I guess I never really chose it.

It’s the only thing I ever really wanted to do. When I decided to take my writing seriously, I applied and was accepted to the Writer’s Studio at SFU in Vancouver. I loved the program and had grown a lot as a writer during that year, so I knew I was on the right track. After that, I moved to Toronto to attend the MFA program at Guelph. My first book, TheBest Place on Earth, was my graduate thesis for the MFA program. I submitted it to HarperCollins after I graduated and to my shock and delight, they accepted it for publication right away.

It’s a two-part answer: my first publication in Hebrew was a poem I wrote as a child and dedicated to my father after his passing, titled “Why?” I also began sending stories and poems to a children’s magazine during that year. My first piece in English, my second language, was “You and What Army,” a memoir essay about my time in the Israeli army.

The poem was in the beginning of my father’s book of poetry, which was published after his death. “You and what Army” was the winner of Event’s Creative Nonfiction contest and was published in Event Magazine.

I started out as a journalist in my teens and early twenties, but I found that it actually inhibited my writing. I had deadlines to meet and spent so much time working at the computer that by the time I was done, I wasn’t inspired to write my own things. After that, I spent thirteen years working as a waitress. I think waitressing is a perfect job for a writer: it’s never the same, and you get to meet different people every day, observe human behavior, eavesdrop on conversations, and hear many stories.

Everything! Books. Music. Photography. Art. Television. Smells. Travelling. My home. The sea. My family and friends. Taking transit. Cities and the people who live in them. The desert. History.

I love Twitter. It builds a community of writers and readers, and I met some great people and made real connections through it. I also enjoyed building my website, though sometimes blogging can also take away from the precious time I have for writing.

Thank you for having me!

(Thank you for this interesting interview, Ayelet.) 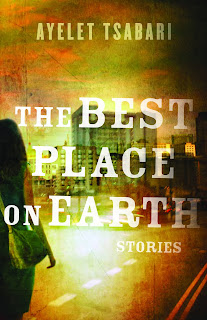 Book Synopsis/Teaser:
Confident, original and humane, the stories in The Best Place on Earth are peopled with characters at the crossroads of nationalities, religions and communities: expatriates, travellers, immigrants and locals. Poets, soldiers, siblings and dissenters, the protagonists here are mostly Israelis of Mizrahi background (Jews of Middle Eastern and North African descent), whose stories have rarely been told in literature. In illustrating the lives of those whose identities swing from fiercely patriotic to powerfully global, The Best Place on Earth explores Israeli history as it illuminates the tenuous connections—forged, frayed and occasionally destroyed—between cultures, between generations, and across the gulf of transformation and loss. 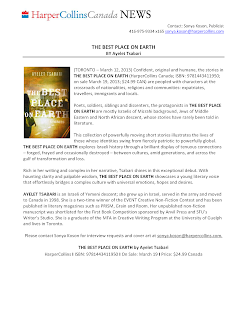