In 2004, I wrote Knitting-An Ancient Craft for my blog. I was thrilled to receive an emailed request from Judy Brown to include it in her soon-to-be-published book Knitting Notes:  A Journal of Knitting Memories (2006) 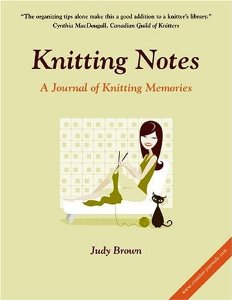 There is some speculation that Stone Age men wore knitted garments.
The oldest knitted garment on record was found in Egypt and dates back to the 6th Century. The small red socks were made in twisted stockinette stitch.

Knitting was, at first, considered to be a humble craft in Europe. However, when Queen Elizabeth the First started wearing knitted silk stockings, the craft gained favour and was, henceforth, looked upon as being quite a fashionable hobby. The knitting terms garter and stockinette (stocking) stitch date back to this period.

17th-century Knitting Guilds were not fun places to click and chat. To qualify for membership, the mainly male artisans had to make a lengthy commitment to learning the craft--the same amount of time it takes to become a doctor today.

Every time we make a stitch, we contribute to the history of knitting. Teach two to knit, and you ensure that our craft will not fade into history.
Re-written on Thursday, August 26, 2021.