This article was previously published in the August 2007 issue of Knit Together
Owner/Editor:  Cynthia MacDougall 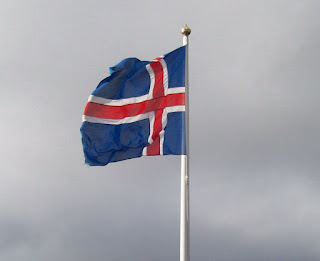 My Icelandic-Canadian grandma taught me to knit--using the Norwegian purl. Knitting has been handed down in my family for generations.

My ancestors left Iceland expecting never to return to their beloved island home. They were packed onto the ship like cattle and took very few possessions. I wonder if my great-grandma took her knitting needles?

Knitting came to Iceland in the 16th century. Traditionally, both girls and boys were taught to knit. 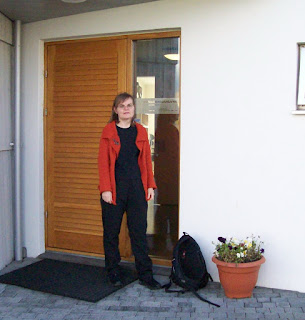 (in front of the Textile Museum)

The Textile Museum in Blondous has a display of a woollen undershirts and fisherman's leggings. The leggings encased the pant leg from toe to upper thigh. At the Icelandic Emigration Centre at Hofsos, I saw traditional Icelandic mitts. Icelanders knew that the thumb was the first part of the mitt to wear out. So they knit an extra thumb. This way when the thumb did wear out all the fisherman had to do was turn the mitt around. That's a fine example of Icelandic ingenuity! 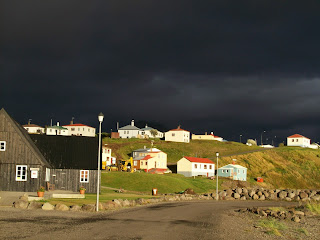 In the 1970s and 1980s, almost everyone in North America was wearing the Icelandic sweater. This sweater craze was started by a country with a population (at the time) of 204, 426. When I visited the National Museum, I learned that Icelander's had started knitting and wearing these sweaters in the 1940s. It took North Americans 40 years to catch up. 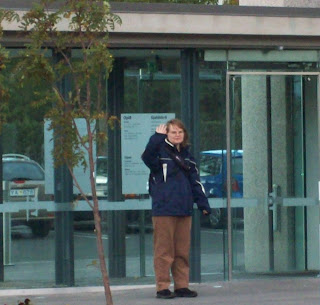 (in front of the National Museum)

While in Hofsos, I spoke with Rosa Tryggadottir, who told me that grade school in Iceland only goes to the equivalent of our grade ten. Upon graduation, students can enroll in studies of their choice. Rosa enrolled in a school that offered needle-craft classes. Some of her friends studied knitwear design at a university level and, after graduation, they formed an association to sell their work--much like the Handknitting Association of Iceland 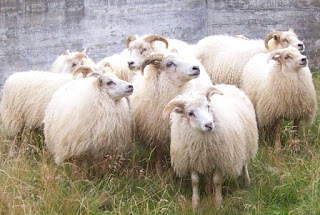 Iceland has a unique program for North Americans over the age of thirty, called Snorri* Plus Participants spend two weeks touring Iceland and accompanying their hosts as they engage in their occupation or hobby What an opportunity for a knitwear designer or knitter! 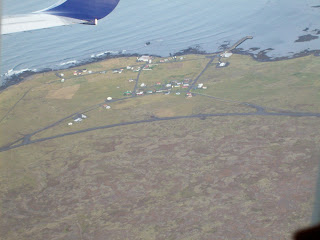 (Iceland from the air)

Iceland has a rich knitting tradition, with customs old and new. Learning about them is an intangible souvenir of my trip that I will have with me the rest of my life.

(*Snorri Thorfinnsson, born of Icelandic parents, is credited as being the first ethnic European to be born on North American soil (not including Greenland).)
Posted by Author Leanne Dyck at 9:00 AM