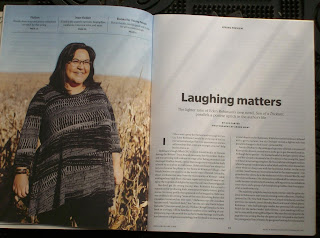 In this article by Sue Carter written for Quill and Quire, Eden Robinson reveals that she started working on a follow-up to Blood Sports but lost interest in that project and then in writing altogether. But writing Son of a Trickster rekindled her passion for the craft. And on November 7, 2017, at the Writers' Trust of Canada's black-tie gala, Eden Robinson was awarded $50, 000. So in Son of a Trickster, you read the work of an author at the height of her game sharing what she loves. 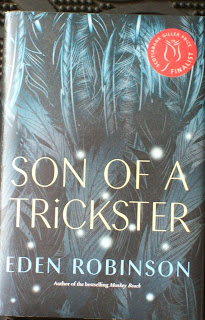 Son of a Trickster is...

Jared's mom and her boyfriend 'took turns firing into the trunk of one of the target trees, which quivered until it creaked, cracked, then fell over.
"Tim-ber!" they yelled together.
"Normal people buy their trees from the Boy Scouts," Jared said, "Normal people don't hunt their Christmas tree down and kill them." ' (p. 66)

'In the sudden silence, the trees shushed in the breeze, a thousand small whispers.' (p. 237)

'His tiny, tightly permed maternal grandmother, Anita Moody, had never liked him... "Wee git," she'd say if his parents left them alone. "If you hurt her, I will kill you and bury you where no one can resurrect you. Get, you dirty dog's arse."
"I'm Jared," he'd said.
"Trickster," she'd said. "You still smell like lightning."' (p. 1)

The mystery of why Jared's grandmother thinks he is a trickster is solved on page 68 when Jared's mom tells him, ' "The nuns messed her up. They made her think everything Indian was evil. And that includes you and me." '

Thank you for this haunting book, Eden Robinson. So glad that it's the first in a trilogy. (I wonder will Jared grow older or will minor characters--such as his girlfriend and his parental grandmother--have their stories expanded?) 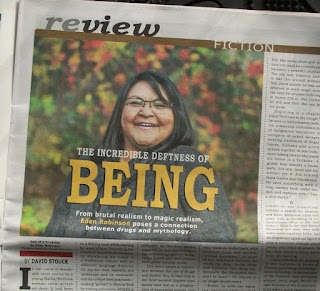 David Stouck writing for BC BookWorld concludes his review with:  '[W]hat this novel does for the non-Indigenous reader is to make totem poles, masks, and legends come alive. This remarkable novel accordingly takes Indigenous writing to a new level.'

Click this link to listen to Shelagh Rogers (Host of The Next Chapter on CBC radio) interviewing Eden Robinson about Son of a Trickster. 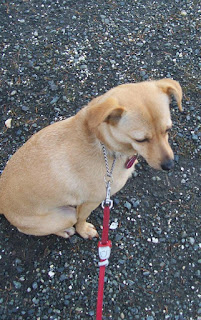 'Abby on a walk' by ldyck