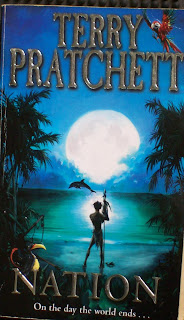 In the quake of a tsunami, two teenagers are left to rebuild the Nation. Mau is an islander. 'Daphne', 'ghost girl', 'Ermintrude' an upper-class cast-away. The culture clashes are simultaneously entertaining and thought-provoking. Mau isn't nieve and Daphne isn't all-powerful. It's a coming together to share knowledge and develop skills for mutual benefit.


An islander:  ' "Imo [god of creation] made them [trousermen] first, when He was learning but He did not leave them long enough in the sun. And you will learn that they are so proud they cover themselves in the sun. They really are very stupid, too." ' (p. 111)

The priest:  ' "[T]he difference between the trousermen and the Raiders is that sooner or later the cannibals go away!"
"That's a terrible thing to say!" said Daphne hotly. "We don't eat people."
"There are different ways to eat people, girl, and you are clever, oh yes, clever enough to know it. And sometimes the people don't realize it's happened until they hear the belch." ' (p. 256)

Daphne and her father talking about the island...
Father:  "It's a long way from anywhere important, though."
Daphne:  "No, Papa. This is the important place. It's everywhere else that is a long way away." (p. 364)


What to read next?


Was Nation influenced by Robinson Crusoe? The thought prompted me to find my copy of the classic. I began to read but it begins with backstory--an old way of beginning a yarn. It didn't hold my interest. And I worried about the effect it would have on my writing. Everything I read shapes my writing. I put the book down and picked up...

Yiddish for Pirates by Gary Barwin

The connection to Nation:  a parrot. In the Nation, a parrot makes brief comic appearances. An African Grey named Aaron narrates Yiddish for Pirates. Aaron guides the reader through adventures on land and sea as he shares history lessons, Jewish culture, and love of literature.

Moishe 'recalled his father telling him that Jews were "the people of the book"--books were akin to blood, something that allowed them to live forever.' (p. 54)