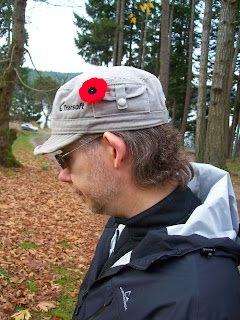 My husband wearing his poppy


I once knew a man. Although he was old when I met him, by the twinkle in his eye, I could see glimpses of the young man he had once been.

He was of age upon the onset of the second world war and, like the other men of his community, he was eager to enlist--an eagerness driven by a passion to see the world, and to service his country. He'd wanted to sail from cloud to cloud on the wings of a huge, iron bird. But, it was not to be. Instead of traveling to distant lands--Italy, France, Japan--the man was stationed at a radar base in Newfoundland. There were memories he would never share; horrors he would never live.

In sadness and in pride, the man stood straight and tall each and every Remembrance Day. He'd known the men who never returned. They'd been his playmates, classmates, friends. And he ensured that I honoured them, as well. Through him, I saw the soldiers not as faded images from a distant past but as flesh and blood.

I once knew a man. That man was my dad.

My dad wrote the story that follows and it was published in our community (Eriksdale, Manitoba) history book Memory Opens the Door (first printing 1970; second printing 1974) 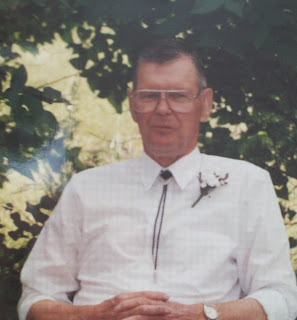 My dad (taken on my wedding day)

A Tale From the First World War

One day after the folks had moved to B.C., they were back here visiting and Dad went with me to the train to pick up the mail for the Post Office.

One of the crew stepped off the train and Dad said, "Well, if it isn't Wilfred Lamb."

They shook hand and, pleased to meet each other, immediately began talking. As they chatted Dad told Mr. Lamb about a notice he had found on the wall of a bombed out building in France, during the First World War. The notice advertised a boxing match, to be held in Eriksdale, between Wilfred Lamb, Peter Whittall and others.

Thinking the paper would be of interest to Mr. Lamb, Dad arranged to meet him on the station next morning when the train went south, to give it to him. Then he went on to tell me how he had come by the notice.

"I was with the 16th Canadian, and they were a pretty tough regiment. It didn't matter how tired we were, we always marched back from the lines. But, there came a day at Passchendaele, when the regiment was in bad shape, we were told to make our way back as best we could. I was so weary I just had to sit down to rest.

"While I rested, my pack of ammunition slipped off unnoticed and I had gone quite a distance before I realized what had happened. Without protection, I would not get far, so I picked up the rifle and ammunition of the first dead German soldier I came across and continued to make my way back. I met one of our officers and hurried to explain the lost equipment and my reluctance to be travelling in that area without some means of protection.

"When I came across the bombed out shell of a building, I knew it was time to rest awhile, for I was incredibly tired. I probably dozed a bit, then as I looked around in the dim light I could see 'ERIKSDALE' in huge letters on the wall opposite my resting place. That shook my confidence considerably. It just could not be, not here in France. But, it was there. Each time I looked up I could see it. Clearly, I had become deranged, 'looped' as some of the fellows called it. I hurried away from that spot, yet, that word 'ERIKSDALE' on that wall haunted me. Had I been seeing things, or was it real?

Next day I went back to that place. It was there. On a great big notice! A notice telling of a boxing match, to be held in far away Eriksdale, Manitoba. My home town! I took it down and sent it home and that is the paper I shall give to Wilfred Lamb, tomorrow."

How did the notice get on a wall in France? Who knows? I have pondered that question many times.

Probably, some one from 'home' had sent it to their soldier at the front. He, for want of something better to do, had hung it there -- and perhaps for a few moments forgot the Hell of War as he gazed at an ordinary notice from home -- and savored in dreams, the day when he would be 'going home'.

It is quite a few years since that day. Wilfred Lamb passed away not long after and I have often thought I should have had a copy made of that notice, but -- one is inclined to put off things not of immediate concern. Now, it is too late.
***
If you would like to learn more about Passchendaele and how it affected Canada and Canadians, I highly recommend watching this movie Passchendaele (written, directed and staring Paul Gross) 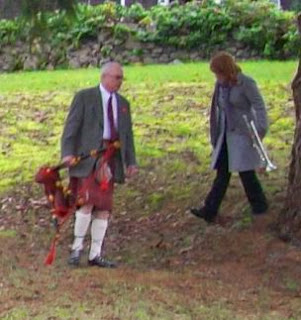 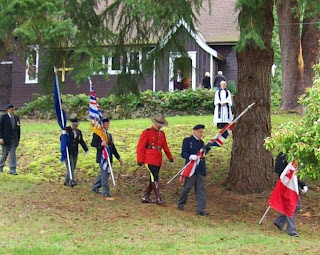 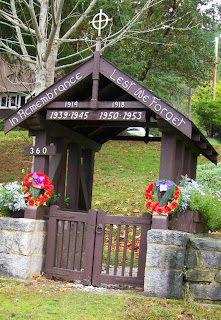