Holly Robinson has been writing feature articles, essays and advice columns on health, parenting and psychology topics for national magazines since 1995.  She has been a contributing editor at Ladies’ Home Journal and Parents magazines.  Her work has appeared in The Boston Globe, Family Circle, More, Parents, Parenting, Shape, and WorkingMother.  Her first book, The Gerbil Farmer's Daughter (Crown 2009) is now available in paperback.  Her second novel, Sleeping Tigers, was indie published and named a 2011 ForeWord Reviews fiction semifinalist and a 2012 Best Indie Books semifinalist by Kindle Book Review.  Her new novel, The Wishing Hill, will be published by New American Library/Penguin in July 2013.
Ms. Robinson holds a B.A. in biology from Clark University and is a graduate of the MFA program in Creative Writing at the University of Massachusetts, Amherst. 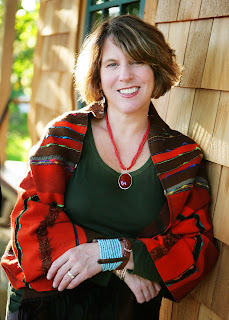 Knitting a Novel:
Pull Out Your Stitches and Put in Your Time

I am a new knitter, but an experienced novelist.  It's only lately, as I've jumped ship from indie publishing to one of the Big Six publishing houses, that I've begun to realize what my two favorite activities have in common.
PASSION:
I majored in biology in college because I wanted to be a doctor.  My last semester of college, I had to fulfill an elective, so I signed up for Creative Writing.  I had been slogging through microbiology and organic chemistry classes, so I was looking for something easy to breeze through.  I couldn't have been more wrong:  from the moment I began writing that first short story, writing absorbed my attention like nothing else.  Seven hours could pass like seven minutes.  I had found my passion!

Oddly, knitting had the same effect on me.  I've never been a crafty person.  (My Christmas gifts look like they were wrapped by an eight-year-old.)  But for whatever reason—the colors and textures of the yarn, the soothing sounds of needles clicking together—knitting became my passion for those times when I need an excuse to sit.  By now, I've graduated from scarves to sweaters, and I always have a project handy.

AN OBSESSION TO REVISE AND REWORK:
To paraphrase Mark Twain, writing is one percent inspiration and 99 percent perspiration.  When I decided to go to graduate school to earn my MFA in creative writing, I met many other writers who were convinced they would one day own posh houses and live off their royalties.  The thing is, the writers who managed to publish books weren't necessarily the ones who were so confident, or even the writers with the most talent.

Instead, those who actually managed to publish their stories were the writers most committed to working and revising their writing.  They didn't bring the same story to workshops all semester long.  They brought many stories (or chapters) and reworked them over and over again.  For my part, I had vowed that I would write only for a year and, if I didn't get rich or famous, I would be sensible and become a doctor.  It took me many years to publish a story, and even longer to publish books—over two decades of not just creating new works, but revising them.

Likewise, every sweater I've made, I've had to go back and pull it out, sometimes more than once.  “You're not really going to do it over again, are you?” my husband will ask.  “Nobody will even see that row!”

Maybe not.  But I'll know it's there, so I pull out the sweater and start over, the same way I revise my imperfect sentences.

A BELIEF IN THE CREATIVE LIFE:
Because we live in a world where money matters, believing in the creative life enough to actually live it can be difficult.  Most people perceive art—whether you're knitting a scarf or writing a story—as something nice to do in your spare time, maybe, but not as something “real” and worth doing.  It takes a lot of courage to follow your passion with enough conviction to put in the hours you need to succeed.

Despite having sold a memoir to Random House in 2009, after two decades of writing fiction, I still hadn't sold a novel.  In frustration, I self-published my novel, Sleeping Tigers, in 2011.  Scarcely two weeks later, my agent sold my newest novel, The Wishing Hill, to New American Library, Penguin.  I was so astonished to hear the news that I had to lie down on the floor during that agent's phone call.

In retrospect, though, it all makes sense.  I had to believe in myself enough to put in the hours necessary to master the craft of writing.  Yes, there are writers who publish early in their careers, but many more of us have to face rejections along the way and maintain that belief in ourselves.  It isn't easy.  That's why, just as I have a knitting group to help me master new stitches, my writing life has been made possible by being in a fiction group that has met monthly for the past ten years.  I wouldn't be where I am without them.

Whether you're writing or knitting, follow your passion with purpose, and your life will be rich indeed. 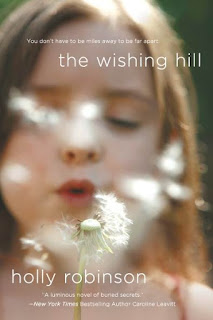 THE WISHING HILL:  A Novel

You don’t have to be miles away to be far apart.

What if everything you thought was true about your life was wrong?

Years ago, Juliet Clark gave up her life in San Francisco to follow the man she loved to Mexico and  pursue her dream of being an artist. Now her marriage is over and she's alone, selling watercolors on the Puerto Vallarta boardwalk to tourists.

When her brother calls to ask her to come home and help care for their ailing mother, Juliet goes reluctantly.  She and her self-absorbed actress mother have always clashed.  Plus, no one back home knows about her divorce—or the fact that she’s pregnant and her ex-husband is not the father.

Her plan is to get her mother back on her feet and return to Mexico fast, but nothing goes as Juliet planned.  Back in Massachusetts, she plunges through the ice while skating  and is saved by her mother's oddly reclusive neighbor, Claire—and finds herself caught up in a strange feud between the two older women.  Despite her ever-expanding waistline, she also finds herself falling hard for her mother's carpenter.  As Juliet resists an inappropriate romance and tries to uncover the roots of the animosity between her mother and Claire, she discovers that she’s not the only one keeping secrets that could change everyone's lives forever…