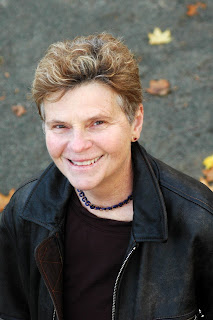 I started to write creatively after completing a graduate thesis in 1994.   I remember driving home from UBC after my oral defense, thinking it was too bad that I had finished the project because I had enjoyed the writing process, the business of chewing over ideas and arranging them.  And revising.  And then immediately the idea of writing a novel popped into my mind.  And I don’t have to include footnote, I thought.   So the next morning before I went to work, I began my novel.  Fifteen minutes in a coffee shop.   it was about four chapters long before I abandoned it.  In the meantime, I had joined a writing group, enrolled in a writing class and started to write poetry, which is my main love.

I kept taking writing classes.  I did a reading or two.  I made friends with other writers.   One day, after sending my new manuscript to several presses, one of them accepted it.  The process was more complex, and I began to think the manuscript would never get published, but one of the editorial board at my first published was willing to take a chance on an experimental book – mine.

I took the SFU Writers’ Studio program with Betsy Warland in 2001/2.  It lasted a year and was organized to accommodate people with full-time jobs.  I learned so much.  At the end of the year, the students put together an anthology.  I think that was where I first published a number of poems.  The program is in its 12th year, and is very popular.   I think it’s really important to learn as much as possible about writing, retreats, workshops, classes, programs, degrees.   I’ve taken them all, and I still want to take more.

I became a writer late in life.  I was forty-nine when I began writing the novel.  I called it Lake City.  I worked for over twenty years as a social worker and social work administrator in Vancouver mental health services.  I am a mother.  After I had children I went to McGill University and became a social worker.  I keep going back to school.   I love going to school.   I wrote my first published book about working in government bureaucracy.  It’s called Paper Trail (NeWest Press, 2007) and is written in mixed genre, much like Leaving Now.  People who work in bureaucracy have told me that Paper Trail speaks to their own situation.   It contains some poetry, some narrative, some fantasy, with Franz Kafka racing around the corridors of the office building.   It won the 2008 Victoria Butler Book Prize, and was short-listed for the Dorothy Livesay BC Book Award for Poetry.  Both are very prestigious BC prizes; I was enormously chuffed. 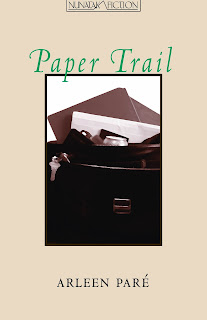 Reading other poets, good and excellent poets can inspire me most.

I think networking is important.   Going to classes.  Getting to know different authors.  Using the new technologies, like blogging and face book.  I think these activities can help to market authors and their books.

If you love to write, write what is difficult for you, what keeps you awake at night.   Make what you write the most beautiful piece of art you can.  Get other people to help edit your work.   Revise, revise, revise. 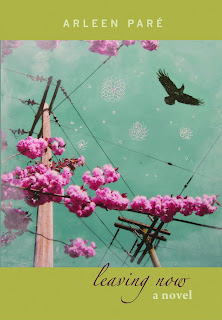 In Leaving Now Arleen Pare, winner of the 2008 Victoria Book Prize, weaves fable, prose and poetics to create a rich mosaic of conflicted motherhood. Set in the volatile 1970s and 80s when social norms and expectations were changing rapidly, Leaving Now is the emotionally candid story of a mother's anguish as she leaves her husband to love a woman. In this second book, Pare masterfully blends aspects of her personal journey with her own version of a well-loved fairy tale. Gudrun, the five-hundred-year-old mother of Hansel and Gretel, appears hazily in the narrator's kitchen--presumed dead, all but written out of her won tale, but very much alive. Gudrun spins a yarn of love, loss and leaving, offering comfort and wisdom to the conflicted young mother.

Raising children is not for the faint of heart, all parents know the anguish of parting from a child, even if for the briefest moment. Leaving Now is for mothers, fathers, son and daughters. It is for anyone who has ever lived in a family.