Many years ago, when I was in elementary school, a story I wrote was published in my rural community newspaper--The Interlake Spectator. My first published story... I thought it was gone. I was grieving its loss. But too early one morning, the plot shook off layers and layers of dust, stood up and said, "Don't be sad. I'm still here."

All that was left for me to do was to write the story. 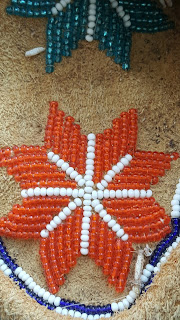 Early one October morning, Mary watched her husband John put his knife and flint into his possibles bag and strap his gun to his horse.

Mary held baby Anna so John could kiss her cheek.

Looking at her husband, she forced a smile--We'll be fine. Go. Go.

"Ho," John called and his horse's hoofs struck the ground like a drum.

A breeze chilled Mary's blood as she watched John ride away, disappearing into the woods. She was a lone sentinel on the vast prairie, facing the wildness of the place.

***
"Bye, baby Bunting/Daddy's gone a-hunting." The bottom of Mary's calico dress dusted the log cabin's dirt floor as she paced, Anna in arms. "Gone to get a rabbit skin/To wrap the Baby Bunting in." Verse by verse, Mary persisted until she lulled Anna to sleep and placed her in the crib. Peace.

A sound... Just outside the cabin. An animal? John? Visualizing pelts strung across his back, she threw open the door.

She searched the cabin, looking for... The rifle was propped in the far corner of the room--more than an arms reach away.

Looking back, she saw the savage fall to the ground. Then she noticed the blood.  Had he been the victim of a bear? Wolves?

Fighting through fear, Mary helped the wounded creature to the quilt she'd spread on the floor.  She pulled up his blood-stained tunic and found the inflamed cuts that crossed his belly. She dipped a clean rag into the water bucket and used it to wash his wound. The rag was soon soaked with blood. She used another rag and another. The blood wouldn't stop. She cut a long strip from... What? A bed sheet. She made a thick pad with more rags and applied that to the wound. Helping him to sit, she put his hand on the rags on his belly and pressed down so he knew to keep it there. She wrapped the long strip over the pad of rags and around his torso. After securing the bandage, she helped him to lay back down. His body went limp. Was he resting or had he passed out from pain?

***
Arms full of firewood, Mary made her way back to the cabin. She pushed the door open to... The savage stood over her sleeping baby--knife in hand.

Mary shrieked, dropped the wood and reached for the rifle. She turned back around to shot...

A woman alone in a cabin could be easy prey for a band of savages. Mary pushed the thought away--over and over again. That night she slept with the loaded rifle under her bed.

***
On her way to get more firewood, Mary noticed a bundle wrapped in buckskin. Bringing it inside, she unwrapped the bundle and found beaded moccasins. She slipped them on her baby's feet and they fit perfectly.

Gratitude for kindness exchanged for kindness, transformed this story into a family legend about a skilled craftsman.

After my short story was published, a friend's mom asked, "So that was a story about your dad's mom?"

Feeling a little ashamed for fooling her, I softly said, "I made that story up."

She didn't say anything and I thought she might be angry at me. But then she said, "Oh, that's good. That's a very good story." And she smiled like maybe I'd impressed her.

My reviews of books by First Nations authors...

The Inconvenient Indian by Thomas King

The Break by Katherena Vermette

Son of a Trickster by Eden Robinson

Empire of Wild by Cherie Dimaline

Crow Winter by Karen McBride
The Barren Grounds by David A. Robertson
From the Ashes by Jesse Thistle 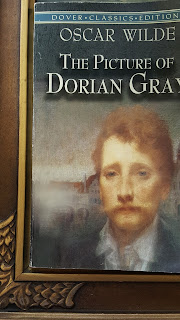 photo by ldyck
Next Sunday evening...

Published in 1890, the British Press condemned The Picture of Dorian Gray as "vulgar", "unclean" and "poisonous". But I thought...