How/why did you start to write?
Many years ago, and I really mean many, I saw a black and white movie based around the Pyramids in Egypt. It had an Indiana Jones feel to it with doors inside The Great Pyramid crashing shut, and trapping people inside. From that day forward I always held a fascination for the pyramids. Several decades later a German robotics engineer, together with a team of Egyptologists tried to ‘peek’ behind one of the doors at the end of a long shaft, which allegedly was protecting a secret chamber. All they eventually found was another door behind the first. I felt this had to be the start of a great adventure, so I wrote an outline, which eventually became The Pyramid Legacy

How did you choose your genre?
Once I had the germ of an idea it became quite a logical process. I wanted to write something which wasn’t easily pigeon-holed into one clear genre, but at its heart was thriller. Any sort of ‘rules’, in my mind, stifle creativity. I wanted a thriller, which also had an element of suspense, and I didn’t want to be restricted to the present day, or the past. So The Pyramid Legacy weaves its way through many different genres. It is sci-fi, it is a thriller, it has suspense, and it even has a romantic theme threading its way through the story. I also wanted the characters to be different from many other novels. My ‘hero’, Ben Anderson, wasn’t going to be the all-action, ex-special forces archetypal super-hero you read about in many thrillers. He was going to be the complete opposite. Ben is a totally reluctant hero, who is risk averse, and who has to really push himself outside of his comfort zone; a comfort zone which doesn’t extend very far. I also wanted my characters to occasionally enjoy some banter during the less serious elements of the story – something I feel is missing from many thrillers.

Where was it published?
The Pyramid Legacy is self-published, and is available both in paperback form and Kindle, via Amazon UK and US, and all other Amazon platforms across the globe.

What’s next?
I am already a long way into the sequel, which I’ve titled Operation Stonehenge.

Why a sequel?
During the extensive research I did for The Pyramid Legacy I came across some extremely interesting facts, which link The Great Pyramid to Stonehenge. Having been born only a few miles from Stonehenge it too has always held a special place in my heart. It was the perfect opportunity to create a novel around the relationship between these two iconic structures.

Please share one of your successful author marketing techniques
In my “day job” I deliver training courses in the area of business improvement, and one of the subjects covered, among many others, is marketing. So I have applied many of the concepts I teach in developing a marketing approach for my writing. My website has a blog which I have called ‘Marketing Tips for Authors’, where I share my thoughts and ideas with fellow authors.

Parting words – can you give us one example of what you mean?
OK, let me give just one simple example – setting up a Twitter account. If an author intends to write more than one book, don’t use the title of your first book as your Twitter handle. If you build a following of several thousand people, what are you going to do when the second book is ready to promote? Set up another Twitter account? That would be pointless. Choose carefully, and why shy away from using your own name. Use the characters Twitter allow to produce your bio wisely, and always put the word ‘author’ in in it. People use terms to link up with people. I get many new followers each day who clearly have similar interests to me. Avoid book covers as your Twitter image. What you need to do is build a brand . . . and that brand is you. When your favourite author publishes their next book the chances are you’ll buy it regardless of its title etc. The author is the brand. Choose a photograph of yourself you are happy with, and stick with it. I hate having my picture taken, so I use one my youngest daughter took of me in a restaurant whilst in Liechtenstein. It’s OK, and saves me having to sit in front of a camera. I use the same photograph on everything related to my writing. My website, Twitter, Facebook, this blog etc. Your photo is your logo. Use it to help build your own brand. 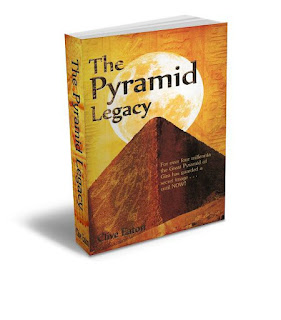 A sci-fi plot twisting the fibres of history together with those of the future . . .

For over four millennia the Great Pyramid of Giza has guarded a secret image; until NOW!

The Great Pyramid of Giza, unlike most ancient Egyptian monuments, lacks one conspicuous feature: hieroglyphs. So when, for the first time in over four thousand years, a prominent young Egyptologist discovers the first engraving inside the Great Pyramid, why is he murdered by a senior colleague? The authorities are keen to cover it up, but they know they can’t achieve total closure whilst English robotics engineer, Ben Anderson, remains in possession of a powerful image. An image, which suggests the Great Pyramid at Giza was not built by ancient Egyptians. 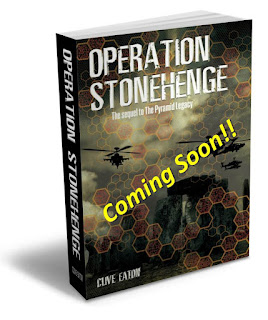 The evidence is unquestionable. The architects of The Great Pyramid and Stonehenge were related!

So what does a ring of standing stones in Wiltshire, England, a pyramid in Egypt, a painting in a church located in a small village in France, and a remote location in Nevada have in common? The answer is simple, but the reason, well, that’s a totally different story.

Robotics engineer, Ben Anderson, is once again plunged into the deep end of a mystery which involves murder, cryptic puzzles and a frantic race against an ever faster ticking clock.

He needs to carefully thread the links together to enable him to find the missing elements of a long lost artefact. Failure is not an option, but success seems totally impossible. In this final throw of the dice, can the deadline be met? If it isn’t, the consequences are unthinkable. 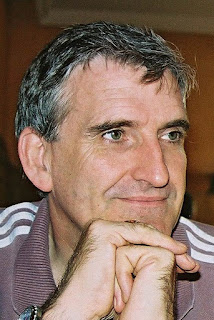 Clive Eaton initially trained as an aircraft engineer in the Royal Air Force and worked on Vulcan bombers for a number of years.

He now works as a freelance international trainer in the area of business improvement, and his work has taken him to over 30 countries around the globe.

The Pyramid Legacy is his debut novel and the inspiration came when Egyptian authorities discovered a secret door inside the Great Pyramid of Giza. Although nothing was actually found on that occasion it triggered a 'what if?' question, and from there the story developed. Clive is now writing the sequel, which will be titled "Operation Stonehenge".

The Pyramid Legacy was initially published as an e-book, but now is available as a paperback.

Clive lives in a very peaceful setting, with his wife Judy, in the heart of rural Norfolk, England, which he believes is an amazing place for getting in the right mood for writing.
Posted by Author Leanne Dyck at 9:00 AM