I was in the middle of reading an award winner. When... 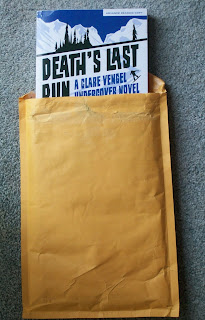 a friend of this blog Author Robin Spano sent me an advance copy of her new book--Death's Last Run.

I was itching to start reading Robin's book but I was committed to finishing the other book. So, I told myself, Just one page.

Death's Last Run is written in a warm, friendly, uplifting style. I laughed out loud at page 64. 'Flopface'. Love  it!

This book is peopled with good characters who truly care about one another. I especially enjoyed the Richie character. Richie often quotes the business advice he had gleamed from reading The Religion of Success--for example:  'If you know where you're going, you're far more likely to get there.' [An opportunity to visualize future success... An invitation I've accepted.]

Many may poop-poop the power of the mighty blog. But chapter twenty-one reveals the foolishness in such an attitude.

In this chapter, US senator, Martha Westlake is interview by a blogger. When he asks if she'd like to retract a statement, she replies, ' "I don't care... Does anyone even read your blog?" '

Those quotes warm this blogger's heart.

In Death's Last Run Robin Spano explores the topic of charity--who receives it; who offers it; why and the feelings involved.

' "And if a little rich girl had come along and tried to rescue me from my so-called poverty, pretty sure I would have punched her in the mouth before I took her charity." ' (Clare, p. 242)

' "I came to America to get my revenge. I planned to become so wealthy in the Land of Opportunity that I could squish Sacha Westlake with my power, then give her a helping hand. Show her how that felt.

But when I arrived in New York, she was dead.

I instantly hated myself for all those years of rage. Sacha had been kind to me, and I was so self-obsessed I could not see it.

I wanted to turn back time, to write back even in imperfect English, to say thank you to this sweet girl who shared her allowance, and her world with me in letters." ' (Lorenzo Barilla, p. 247)

' "People like Sacha think they can fix the world's problems by patting their heads and throwing money at them. They consider themselves the ruling class. Like we commoners couldn't possibly know what's good for us." ' (Norris, p. 248)

A young snowboarder is found dead on the Blackcomb Glacier, and Whistler police want to close the case as suicide. The victim's mother, a U.S. senator, says her daughter would not, and did not, kill herself. At her request, the FBI sends in an undercover agent--Clare Vengel--to find out who might have killed Sacha and why. Dropped into a world of partying with ski bums and snow bunnies, Clare soon discovers that Sacha was involved in an LSD smuggling ring. Worse:  the top cop in Whistler is in cahoots with the smugglers, and Clare's cover is too precarious for comfort. As suspicion snowballs, can Clare solve the case before she's buried alive? 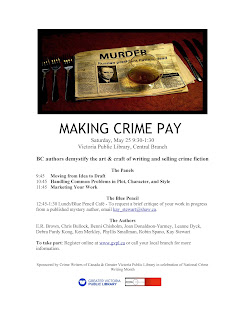 Robin and I will be sitting on the same panel at
the Crime Writers of Canada
free
Mini Conference
***
Sharing my author journey...
A few months ago, I entered WOW Women on Writing's Winter Flash Fiction Contest. This week I received the results...

(Brief summary)
A man doesn't want to leave, but knows he has to

(Overview)
I like this story a lot! It hits home for me because my parents' families were interned in the camps in Poston, Arizona. Such a crazy point in history, and we all hope history never repeats itself. I love his inner conflict and his anxiety, especially when he sees the lights. You did a nice job of showing his dignity--he packed his suitcase, opened the door, and followed them when they arrived on his porch. I also like his patriotism in light of what the country was doing to him. Nice work!
Posted by Author Leanne Dyck at 9:00 AM