When I was in grade 4 there was a writing contest at my public school. It was open to any student in grades 4, 5 or 6. As soon as I heard about this opportunity I knew I would submit a story. Horse back riding was my passion at the time and decided to write about Jim Elder, who then led Canada’s equestrian team. I conducted much research, with my other helping me find the courage to look up his phone number and call him to ask for an interview. We were probably only on the phone for 5 minutes but I can still feel my heart pounding with nervous excitement. I worked on my non-fiction story for hours, and handed it in certain I would place in the competition. On the day the announcement of the winners was to be made, students were assembled in the gymnasium. When the teacher in charge called out the name of the 3rd place winner and it wasn’t me, I was gleeful. Aha, I thought, I knew it. I’m so going to win this competition! So, when the second place story was named and its author brought up on stage, I could barely contain my exuberance. It was going to be me, after all, I thought! When the first place winning entry was announced, and it wasn’t my story, I was stunned. Shocked. Indignant. There must be a mistake, I thought. I’m a writer! From that moment on I was determined to keep writing until my work drew the attention of careful readers. I had written poetry and little stories since the age of 5 or 6 but it was that moment that solidified my resolve.

With much hard work and probably even more luck.
I had been working full time for 11 years, in front line mental health. I had trained at the graduate level in counselling psychology. I loved my work. But all the while I was trying to write a story, which kept unfolding and ultimately became my first novel, Ten Good Seconds of Silence. At the same time, a writer I greatly admired, the late Timothy Findley, was coming to Toronto where I lived to teach in the Humber School for Writer’s summer workshop. I applied in order to talk with him about writing. To my delight, I was admitted to the workshop. In a pivotal conversation with Tiff he told me I must finish my book. I left Humber thinking that if a writer I so admired has told me to finish and I don’t, I would have no one but myself to blame. I took a year’s leave of absence from my job and wrote night and day. When I was done I had to find a publisher by submitting to the slush pile. One editor loved the story and called me. Six months later, in 2001, I had a published book in my hand. As it turned out, Ten Good Seconds of Silence was very popular with readers and critics so I was encouraged to write my second novel, Smoke. That book was published in 2005. Now, here I am, 13 years after attending that workshop, launching my third novel, Matadora, and I still haven’t returned to the day job. Every writer becomes a writer in a different way, along a different path. The only thing that’s important to know if you’re trying to become anything is to keep on trying. Break to isolation of writing and dissipate feelings of inadequacy and doubt by trying to connect with another writer, who is farther along the path.

A story told entirely in the second person point of view entitled, Away for A While. It was only four pages in length and was about a woman (and a mother of a small child) forcibly committed to a psychiatric institution. I wanted to show her experience directly, and also give her agency to assert what little power she had.

It was published in two literary journals within the same year – CV2 and Room of One’s Own.

I can’t remember. Probably 15 years. After that story I published a string of stories within a short period of time. I found publication addictive.

I suppose I would answer that question differently for each of my three novels. But for the new one, Matadora, I have to say it was one day when I was listening to the national news on the radio. I heard of a 16 year old girl fighting bulls in Mexico. I literally stopped what I was doing (frying eggs) and sat down on the kitchen floor. Why would a girl do this? Why would anyone do something so violent and dangerous? That was the spark of inspiration, a couple of questions. But when I think about it, the more profound inspiration for Matadora began long before that day in my kitchen. It began when I was 7, 8, years old, living in South America, becoming fluent in Spanish and most importantly witnessing levels of poverty I had never seen before. Having conversations with my mother about why some people didn’t have food or a place to live or why some people couldn’t get medical care. The seeds of a social justice analysis were planted in me back then, and Matadora is a book that looks at class issues, class oppression, leading up to, as it does, the Spanish Civil War and the rise of Fascism in Spain. It’s not an historical novel, but the political divisions within the Left, and the rise of the Right, at that time in history, provided me, in some respects, with a wonderful mirror for our times. So, what began in me as a child has had several decades to germinate. I have to think that this book was inspired, in stages as I developed my own political beliefs, my own notions of personal freedom and of social responsibility. I don’t believe Matadora could have been written before now, and I don’t believe Matadora could have been written by anyone else.

Matadora is a novel that centres on a female bullfighter, set in 1930’s Spain and Mexico. But like all good books about bullfighting, it’s really not about bullfighting at all. This book is about ambition, passion, art and politics. At its heart it asks the question: if you had to choose between your greatest passion – the thing that makes you who you are – and the person you love most in this world, what would you choose?

I don’t think in terms of building platforms although publishers and industry folks certainly do. I think in terms of building community. That is why, to whatever degree I have it, I have been successful in getting my books into the hands of readers. Build community with other artists, share ideas and be generous in promoting others. Also, don’t expect anyone – not your publisher, if you have one, not your agent, if you are so lucky, not your mother – to care as much about your work as you do. Therefore, you must have your hands in many pots – writing, editing, and all the business side of things such as creating book club brochures and updating your website. It takes a lot more than being a good writer to be a successful writer.

It is extremely and increasingly difficult for aspiring writers to get published or make careers for themselves. Don’t waste time despairing this reality. Write and rewrite and when you’ve got something polished try your best to find a home for it. Don’t feel that there is something wrong with you if that journey takes longer than you’d hoped, or takes some ugly twists and turns. You must determine to write regardless of what external forces work against your, or in your favour. You must just write. If you write enough, and you write well, you will write your own way forward.

If you read Matadora and want to discuss it feel free to contact me via www.elizabethruth.com 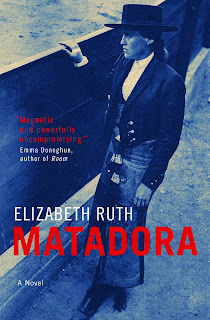 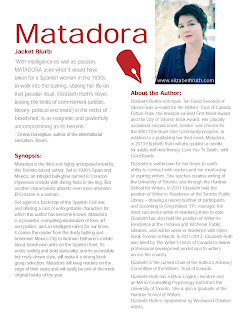 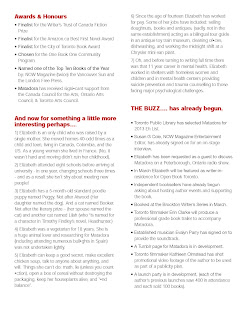 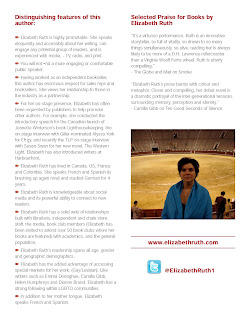 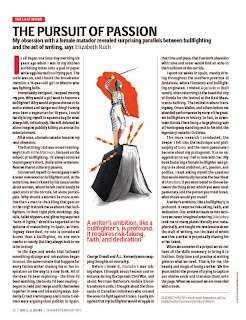