Kay Stewart is the author of police procedurals featuring RCMP Constable Danutia Dranchuk. Unholy Rites, written with husband Chris Bullock, is the third in the series. Kay has also published short stories, personal essays, and writing textbooks. She taught at the University of Alberta before moving to Vancouver Island to devote her time to writing. She is active in the crime-writing community, having served as National Vice President and President of Crime Writers of Canada and co-chair of Bloody Words 2011. 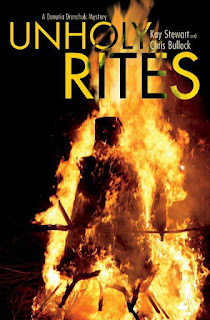 Mysteries centred around specific crafts have a large and devoted following. I’m not a craft-y person myself (being left-handed is my excuse), but in researching Unholy Rites (TouchWood, March 2013), my husband and co-author Chris Bullock and I found ourselves deep in the mysteries of a craft called well dressing.

Chris is English, and after two books set on the West Coast, we wanted to give our main characters, RCMP Constable Danutia Dranchuk and drama critic Arthur Fairweather, an English adventure. We were fascinated by the Peak District area of Derbyshire, with its rich mixture of pagan stone circles, “dark satanic mills” from the Industrial Revolution, and the well dressing festivals held from May to September in villages large and small.

So what is well dressing, you ask. Originally, it was likely a pagan custom of bringing flowers and garlands to the quixotic springs that bubble up and disappear in this limestone landscape, in gratitude for the blessing of water. In late Victorian times, these simple garlands became elaborated into the forms we see today: large clay-covered panels depicting religious or secular scenes made entirely from natural ingredients such as flower petals, cones, seeds, and small stones. Hydrangea petals, with their wide range of hues, make spectacular skies; sprigs of parsley make luxuriant borders. When finished, these panels are erected adjacent to wells or other sources of water, blessed in a special ceremony, and after a week or so of slow disintegration, removed.

Creating these panels takes an immense amount of effort from a small group of people over a short time. Under these conditions, it would be natural for tensions to arise, conflicts to develop, tempers to flare. What could be a better setting for a murder mystery?

Chris and I observed well dressers at work in several different villages, talked to them about their craft, and even tried our hands at decorating small slabs of clay at a morning workshop offered by the petallers of Wormhill. This is often the way children learn the craft, by creating their own small scenes under the supervision of experienced adults. We came away with a heightened appreciation of the painstaking work involved.

How does this ancient custom play out in Unholy Rites? Not simply, because as the title suggests, there’s more than one rite involved, and characters are in conflict over whether these rites are holy or unholy. Guess you’ll have to read the book to find out. 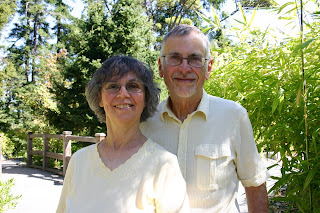