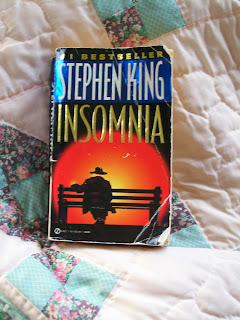 It was a sunny, warmish day—unusual for early October. I unzipped the flap on the canopy, climbed onto the lawn chair and slipped into Stephen King’s world.

Insomnia was published in 1994. Well before the creation of the new genre—Baby Boomer Lit. But there’s no doubt this book belongs in this genre. King writes frankly about growing old and the moment of death.

‘ “The approach of almost every death which serves the Purpose takes a course with which we are very familiar. The auras of those who will die Purposeful deaths turns gray as time of finishing approaches. This gray deepens steadily to black. [The moment of death gives] release to those who suffer, peace to those in terror, rest to those who cannot find rest.’ (p. 396)

The senior citizens that people King’s book aren’t feeble and ineffectual. No, on the contrary, they fall in love, have sex and live dynamic, engaged lives.

Ralph Roberts is vulnerable—having just lost his wife—and so is a sympathetic character. He’s an every man which makes him easily relatable.

‘As that summer became fall, and as that fall darkened down toward Carolyn’s final winter, Ralph’s thoughts were occupied more and more by the deathwatch, which seemed to tick louder and louder even as it slowed down.
But he had no trouble sleeping.
That came later.’ (p. 35)

With the skill of a master, King takes time to develop his story. He uses the first forty pages of Insomnia to develop his characters, build intrigue and establish the world in which his story is set.

Completely engrossed in the book right up and including the bittersweet ending, I only paused briefly to note interesting observations ….

‘The light which did manage to find its way in here seemed to fall dead on the floor, and the corners were full of shadows.’ (p. 185)

‘He could feel the killer’s aura which surrounded this place pressing in on him, trying to smother him like a plastic dry-cleaning bag.’ (p. 501)

Insomnia has an old-fashioned charm, full of quaint sayings like:

And as always happens to me when I read Stephen King’s prose, I was inspired to write…

It’s the time of the year when the clouds drift down in thin veils to dance with the evergreens.
***
Next post:  An interview with author Susan Schoenberger
Posted by Author Leanne Dyck at 5:00 PM