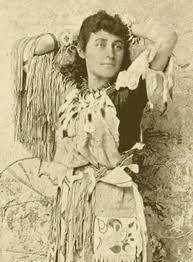 I was digging through my filing cabinet hunting down “something else” and came across “something”.  This something is a paper I wrote for university way back in November 1996. Here’s hoping you enjoy it. FYI, I resisted the urge to re-write.
Pauline Johnson was a strong voice for the native people over her twenty-seven year career. She attempted to build understanding in the white race for the native viewpoint. Her mixed heritage gave her a unique advantage in accomplishing this goal. Her English mother taught her social graces and introduced her early to fine British poetry. Her Mohawk father taught her pride in her native heritage.
Pauline’s career as the native poetic voice began innocently. Pauline wrote a moving poem to honour Red Jacket. The poem was used on October 9, 1884 during Red Jacket’s reburial ceremony. ‘This (was) the first poem Pauline wrote in which she boasted of her Indian lineage and expressed sympathy with her Indian forebears.’ (Marcus Van Steen, p. 15)
Two years later Brantford honoured Joseph Brant, a great Mohawk chief, by erecting a statue in his memory. Pauline wrote a poem honouring Brant. After the success of this poem Pauline adopted her great-grandfather’s Indian name, Tekahionwake double wampum. She hoped this would call further attention to her native lineage.
‘By 1889 Pauline was well-enough known to have two of her poems included in Songs of the Great Dominion, a poetry anthology compiled by Montreal lawyer poet William D. Lighthall.’ (Marcus Van Steen, p. 17) This would prove to be a very important inclusion for Pauline.
Frank Yeigh was browsing through the Songs of the Great Dominion. He wanted to compile a list of poets to perform during a literary evening. Yeigh was surprised and delighted to see Pauline’s name. Frank and Pauline were old friends. He included her name. On January 1892 Pauline gave her first professional recital. The Young Liberal Club of Toronto was receptive. Pauline’s selection, A Cry from an Indian Wife, captivated the audience. Her encore featured a legend that her grandfather had told her. The legend was of a brave warrior ‘who chose to die on a bed of live coals rather than live as a slave… The audience was entranced by this moving tale of courage.’ (Brenda Willoughby, p. 26- 27) Under Frank Yeigh’s careful management this successful evening started Pauline on her life-long career.
***
Pauline Johnson:  selected poetry and prose  introduced by Michael Gnarowski will be released in September 2012