A day in the life of a Tulip

Deep beneath the cold ground, Spring awaits its birth. Tulips scattered about throughout the tunnels ache for their release. They know before they have a chance to breathe air, the crocuses will break through first and tantalize the viewers to a promise of warm weather. Oh how they envied the crocuses.

It had been a long cold winter.

Tiny sprigs as they may be, the tulips fight for their survival. Some were not going to make it, those that just weren't strong enough, others who were impatient and gave up, others who weren't planted correctly and weren't able to grow as they should. But she was strong, determined. She was not going to give up.

Stretching her tiny limbs, Calista whispered to her sibling. "How much longer do you think we'll have to wait?"

"That is the tenth time you've asked me that this week. Do I look like I have the inside scoop?" Ruby snorted, turning away from Calista.

She wasn't much liked among her siblings, though Calista had no idea why. She was no different from her siblings other than being a different color. She had the same limbs, the same cup, the same fragrance. Yet they shunned her.

"My brother, Simon, snuck out and he said the ground is still covered in snow."

She turned to the tiny ant cuddling up to her bulb. "Really? How much snow?"

"It came to the knees of the humans. I think we have a long wait ahead of us still." He scurried off and Calista signed.

"Why are you so impatient, Cali? Spring will arrive when it's ready," Ruby stated with a clip in her voice.

"I'm tired of waiting. My limbs are aching to sprout and I'm starting to feel sluggish." She didn't want to feel this way and tried desperately to break out of her gloom. Problem was, it was already the end of March and the snow should have melted faster than it was.

"Yeah, well we all feel the same, but you don't see us complaining."

"Doesn't it bother you that some of our sisters won't make it through this long dreary cold season?"

"Well, I'm tired of it. I'm tired of year after year, waiting to be born, watching my siblings give up and die. I'm going to make a stand." Where had that come from?

"Will you both keep it down. I'm trying to get some rest," Scarlet Marvel groaned.

"I'm perfectly serious," Calista whispered. "Why should the Crocuses get all the attention in spring?"

"Um, because they're the first to spring into life."

"Well I'm tired of it. I want to be the first for once. I want to break through and be the attention of the humans."

"I'm determined." She would do anything to break free.

"It's your death then." Curling up, Ruby drifted off to sleep.

It wouldn't be her death. It would be her life. Digging deep within herself, Calista willed her sprouts to grow. The ache was well worth it, and little by little, her limbs began to grow. She would break free of her solitude and raise her head high in glory. This was her shining moment. She pushed herself, forced her limbs to grow, forced the bud of life to break out of its shell. She would be the most beautiful of all her siblings, even if she was hated by the Crocuses. Grunting, growing, enduring the labor, the pain, Calista felt the ground give above her. She was doing it. She would feel the air in no time.

The chill began to seep into her stem but she pushed it aside and carried on her journey. Not even the hard ground above her was a deterrent. She pushed, dug, and when she finally felt the ground give, cried out as she broke through.

She ignored her sisters and made her final journey into life. Sprouting from the ground, she tilted her head up to the warm brilliant sun above her. It felt so wonderful on her aching limbs. She breathed in the fresh air, smiling to herself as she looked around her new home. Yes, there was snow, but not as much as the ant had stated. Water coated the roads and sidewalks, indicating it was giving in to the heat of the rays above them.

She'd made it and now she was going to enjoy her new found life.

"Sally, Sally, come look at this."

Calista turned her attention to the gentleman rushing toward her. A middle aged women soon came up beside him.

"How is this possible? The ground is still hard from the winter."

"Must be one determined flower."

She felt him dusting the snow that surrounded her away. "We need to keep it alive."

"How will we be able to do that? They're calling for light snow tonight."

No, no more snow, Calista thought in anguish.

"I have the perfect idea."

She saw him run off while the woman sat admiring her.

"You are a beauty. This is a sign, Oliver. Spring is coming."

"Damn straight it is. And this will help at least our little one here."

Calista watched as he set a tall silver stand over top of her. It had a cone like top with a funny bulb like thing inside.

"Works for the chicks."

Calista blinked as the bulb inside shone with a brilliant bright white light. It felt warm and she titled her head to feel the heat. Now this was life.

"And we're going to baby her."

Calista watched as the couple embraced while standing over her. She was loved. She had life. Oh how she wished she could tell her sisters of this wonderful gift. Grinning Calista watched the snow around her melt, felt the ground begin to soften and suddenly realized... She was the first. 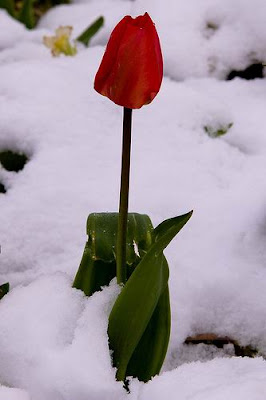 Once and a while, a thought comes to mind that often amazes us. As was the case with this story. It started out a simple little story about spring and soon it became so much more. It's touched hearts, made people cry and had readers cheering for my precious little flower. I think we can all relate to Calista. Haven't we all, at one time or another, been told we couldn't do something, that we were silly for thinking outside the box? I know I have. In my childhood, I was often ostracized and, told I would never amount to anything. I was stupid. People chuckled at my stories, said it would never amount to anything. Well, here I am now, a multi-published author with readers who love my silly little stories. A day in the life of a tulip is for all those who have been made to feel they were less than normal, for those who have been pushed down and belittled. Know that even in the toughest times, you can rise above it. All you need is a little persistence. 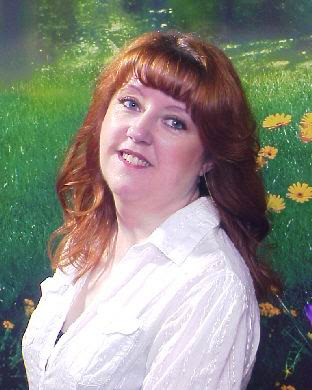 
Raised on a rural farm in Saskatchewan, Sheila Stewart relied on her vivid imagination to fill her days.


Never did she realize that her need to tell a story would someday lead to becoming a published romance author. In the fall of two thousand and six, Shiela published her very first book and hasn't stopped since.

When not writing, Shiela spends time with the love of her life, William and their three children. She has a strong affection for animals which is evident in the five cats, one dog, three turtles and ten fish she owns. Some of her passions aside from writing are drawing and painting and proudly displays her artwork in murals in her home.


Her favorite time of day is sunset and loves to stargaze.