Have you made a warm fuzzy? (short story) by Leanne Dyck

You do good for the sake of being good--not because it will earn you some kind of reward. Or do you act out of selfishness? And if you act without any thought to self-gain, do you still receive a reward?

Some would argue that the mere act of giving is its own reward. That reward is intangible--rather than tangible--a warm fuzzy feeling. Never downplay the warm fuzzies. They give you a high better than any drug. 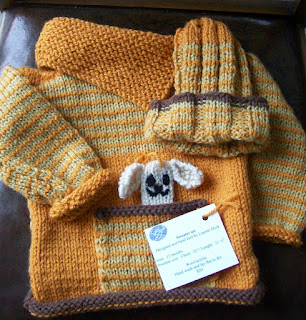 (an example of the knitting I did for babies)

ArtCraft on Salt Spring Island is a seasonal gallery--open during the summer months. They sell locally-made (on-island and from the surrounding smaller islands) art and craft, hence the name. Years ago, when I was a participating crafter, I sailed to them twice a year--to drop off and pick up.

I was on a pickup run--sailing home with a small bag full of knitting. Among the items were several baby toques. Something made me stop reading my novel. Something made me notice them--a mother and her baby. They were so cute together. I carried the toques over to them.

After a brief explanation, I opened the bag.

She dug through her purse and found her wallet. "How much--?"

The look on her face... What a reward.

She popped the hat on her child's head. Oh, so cute.

Another idea: "You probably have friends with babies."

"Here, these are for them." I handed her the bag. And the warm fuzzies doubled. In fact, when I'm blue, that memory still picks me up. 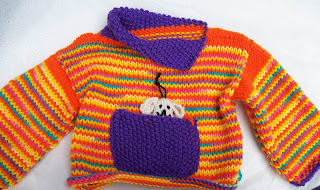 You tell me:  generosity or selfishness? 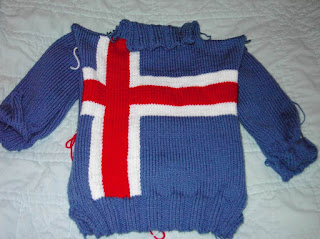 Next post:  Sunday, March 4th (approximately 5 PM PST)
What exactly do we writers owe our readers? What do we promise them they will discover in our books? In my short article, I discuss the author-reader contract with regard to the opening sentence, the hook. 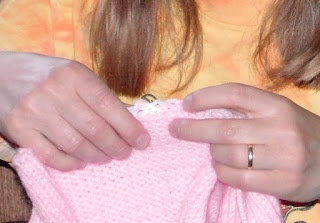 (and caught in the act of working on a sweater for a baby)
This entire post is in celebration--I finished it.

Ever since I stopped calling myself a knitwear designer (2011), I've been trying to write a book that would showcase my writing about knitting (both fiction and non-fiction) and in so doing serve as a thank you to the knitters who supported my career. Know what? I think I'm currently writing that book.