Marc Emery and me, or
How do you research a subject like grow-ops, when you don’t smoke weed?
My book, Almost Criminal, is about a young man who is seduced into the grow-op business. As one online reviewer put it, it’s a view “into the BC drug trade through the eyes of Tate, a brilliant teenage screwup.”
In every reading I’ve given, and every author Q & A session, one subject is certain to arise. Even my mother asked, “How do you know so much about marijuana? How much research did you do?” At least she was nice enough not to use that nudge-nudge, wink-wink tone of voice.
So, I’ll state this again, just for the record: I don’t smoke. Not cigarettes, cigars, pipes; not tobacco or cannabis or any of the products derived therefrom. There was a time when I did, but that time has passed.
But yes, I did research the subject. It took time, but I established an arms-length relationship with someone “inside” who checked facts for me. My home library grew to include titles like Bud Inc. (Ian Mulgrew); The Cannabible (Jason King); and Marijuana Grower's Handbook: Your Complete Guide for Medical and Personal Marijuana Cultivation (Ed Rosenthal and Tommy Chong). If you want advice on how to set up the plumbing for a basement grow-op, just ask. If you want to know the difference between varieties of pot, I’ve got the breakdown from Alaskan Thunderfuck to Vietnamese Black.
My book is a crime novel. It’s not about marijuana, it’s about crime and society, and how my protagonist makes it through. It’s neither pro-pot nor anti-pot. Which brings me to Marc Emery, Canada’s self-proclaimed Prince of Pot, who’s serving a ten-year jail term in a US federal prison near Yazoo City, Michigan. When I was seeking “advance readers” - people who might write a nice blurb to go on the book’s cover - I thought of Marc.
It took some digging (more research!) and some help from Marc’s wife, but I managed to reach him. Marc was happy to read the book. “I have time on my hands,” he wrote. As a result, my name is now in the federal corrections system’s CorrLinks database.
Marc was enthusiastic until my protagonist makes his first visit to a grow-op. The experience I described was not right, he said. I described a teen’s somewhat smart-ass reaction: Tate is not impressed. Marc complained that a grow-op is “sexy, the smells are wonderful, spicy, peppery, pungent.” He implied strongly that it was a near-religious experience.
Now, I know what a grow-op smells like. It’s earthy and damp, and the fertilizers are either chemical or, um, natural. Spicy and peppery wouldn’t be my words. I’m sure that, for Marc, visiting a grow-op is a near-religious experience. But he’s an activist, and he has an agenda that is wrong for my story. I think that, if I were strongly pro-pot (and engaged in the kind of "research” that people jokingly ask me about) my novel would not be the same.

Marc didn’t blurb my book. But he was helpful: he found technical errors that my previous source had missed, for which I’m grateful. He also described a technique for packaging marijuana so it’s undetectable at the border. I didn’t include that in the book. Research is one thing, but I didn’t feel like telling any casual reader how to beat the cops.

I’m sure my mom would agree. 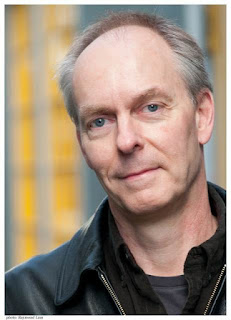 E.R. Brown is a Canadian writer of crime fiction. His first novel, Almost Criminal, was published in April 2013. An award-winning advertising copywriter, he worked as a stagehand, recording engineer, technical writer and chandelier cleaner before settling down and writing for a living. His short stories have been published in literary magazines and broadcast on CBC Radio. He was born and grew up in the Montreal area,  and now lives in Vancouver. 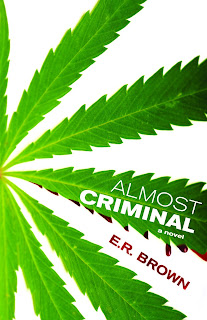 Almost Criminal: Tate MacLane is too smart for his own good, a sort of misguided prodigy. Prematurely graduated from high school, he was tossed out of university (“socialization issues”). Now 17, he’s working at a coffee shop in Wallace, British Columbia, a “hopeless corner of nowhere” and dreaming of finding a way to get back to Vancouver and back to school. Along comes Randle Kennedy, a marijuana grower. Until the drug is legalized, he’s growing medical weed, and the Canadian cops tend to be lenient if they know you’re in the medicinal side of the business. But make no mistake: Randle’s a drug dealer. And young Tate is now working for him. When Tate discovers the truth about the life he’s wandered into, he knows it will take more than his keen intellect to get him out safely. Tate is a fresh narrative voice, and Randle, who could have been a fairly stereotypical drug-dealing villain, has surprising depth; he’s even a weird sort of father figure for young Tate. If you took a gritty crime novel and a coming-of-age story and squashed them together, you might get something very close to this excellent book.


Rick Mofina (bestselling author of the Reed and Sydowski series):
E.R.Brown hits it out of the park – great characters and storytelling evocative of Elmore Leonard.

Robin Spano (author of the Clare Vengel Undercover series of novels):
ALMOST CRIMINAL is a wildly fun read. The concept is original, characters are vivid and fleshed-out, and the story surprised me at each turn, with its unlikely teen hero turning conventional morals upside down. E.R. Brown is an exciting addition to the Canadian crime scene.

Posted by Author Leanne Dyck at 6:00 AM