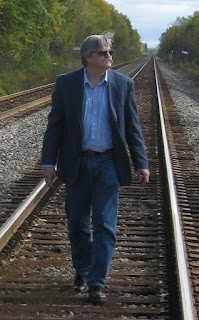 How/why did you start to write?
I've always been a daydreamer and a book reader. As a kid I haunted the public library and read almost everything in the Young Moderns room: science fiction, historical fiction, you name it. I always wanted to write the same kinds of stories, but it took me a very long time to figure out how. In the meantime, I became a student of literature and fed my love of storytelling that way.

How did you become an author?
After finishing graduate school I wrote literary fiction, mostly short stories, and published a few with literary journals, but it became obvious very quickly that there wasn't much of a future for me in that direction. When my son was born I re-entered the workforce to help pay the bills, but the urge to write was never far behind. When my career was finished I was able to return to writing full time as a serious author.

What was your first published piece?
My first published piece -- for which I was actually paid -- was a short story entitled "Sandra." It appeared in the Fall 1987 issue of Event, the Douglas College Review. It was literary fiction, as I mentioned, about a woman trying to piece her life back together after being released from psychiatric care. My first published novel was The Ghost Man, a supernatural thriller, which came out in 2009.

What are you writing now?
After publishing The Ghost Man I turned to crime fiction, and I'm now the author of the Donaghue and Stainer Crime Novel series, which currently stands at three novels: Blood Passage, Marcie's Murder, and The Fregoli Delusion. The stories are police procedurals set in the fictitious city of Glendale, Maryland. The stories focus on the homicide investigative process and the lives of the men and women who devote their careers to their work. I'm currently working on the fourth novel in the series, The Rainy Day Killer, which will be published this summer.

I've also re-acquired the rights to The Ghost Man, and I'm preparing a new edition that will be published this winter under the Plaid Raccoon Press imprint. Like many of my favorite authors from the past -- Fredric Brown and Anthony Boucher come to mind -- I enjoy writing in more than one genre, and I'm also working on a second supernatural fiction novel which I'm planning to publish next Hallowe'en. Stay tuned!

What did you do before embarking on your writing career? Was it an asset to your writing? How?
Before devoting my time to novel writing I spent fifteen years with the Canada Border Services Agency as a support clerk, training specialist, project officer and national program manager. My career in Customs kept me in constant contact with law enforcement professionals who were very generous in passing on to me a wealth of experience and knowledge. I kept my mouth shut (for the most part) and my ears open and soaked it all in, and as a result I have a good understanding of the fundamentals of interviewing techniques, body language, computer systems, arrest procedures and how a law enforcement administration works (or doesn't work, when the budget goes south!). I'm now able to apply this great experience to my stories and give them a reasonably realistic atmosphere.

What inspires you?
People. As a writer I'm an inveterate people-watcher. I'm inspired by the guy sitting at the table next to me drinking his cup of coffee, teenagers in the mall, someone walking their dog in the park. How they look, something they say or the way they move their hands when they talk will trigger something in my head, and suddenly I'll have a character or a situation that will fit into the story I'm writing.

Please share one of your successful author platform building techniques.
As an independent author and micropublisher I've had to make the commitment to put in long hours marketing my books. I wish I had Amanda Hocking's genius for Facebook, but I don't. I'm trying, though! Where I've had the most success so far is through Twitter, which I find is a great medium to reach my target audience. I've put a lot of work into building relationships with followers, which is the key to Twitter. I'm not shy to retweet others, because it's a very reciprocal community and we do a lot to support each other.

How would you like readers to view your work?
First and foremost, I'd like readers to understand that I'm a professional author. I'm working very hard to bring them stories that are entertaining, well-written, error-free and reasonably realistic. Being an independent I'm very aware of the stereotype of the self-published vanity author churning out poorly-edited books with half-baked stories, but I want readers who buy my books to be pleasantly surprised by the high level of quality they find in them. As a former academic with an M.A. in English, a former editor with a legal publishing company, and a former manager with a law enforcement agency, I'm staking my reputation on it!

Thanks so much for having me, Leanne! It's been a pleasure.
(Thank you, Michael. I wish you continued success.) 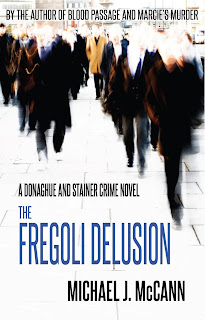 The third Donaghue and Stainer Crime Novel. When billionaire H.J. Jarrett is shot to death on a bike path in prestigious Granger Park, the killer is seen running away by a man who is apparently in the right place at the right time. However, Lieutenant Hank Donaghue and Detective Karen Stainer discover to their dismay that their only eyewitness suffers from a rare psychotic disorder that makes his testimony useless.

As Donaghue’s investigation focuses on the top one percent of Glendale’s social stratum, including close friends of his own mother, Stainer finds
herself alone when her gut instinct tells her that their eyewitness is right after all!

The heat hit them in a wave as they left the front lobby and walked down the sidewalk to the Crown Vic. When they got in, Karen started the engine and cranked up the air conditioning.
“As far as I’m concerned,” she said, “Holland’s alibi was bought and paid for, and he’s a lying son of a bitch.”
Hank buckled up.
“Come on, Lou. My gut’s telling me Brett Parris was right on the money.”
“We’re going to need a hell of a lot more than a gut feeling.”
“Understood. I’m not a rookie.” She threw the car into gear and pulled away from the curb. She drove in silence for a block before looking over at him.
“You just watch me,” she said. “I’m going to peel that bastard Holland like an onion.”

eBook versions also available from Smashwords. See my profile at https://www.smashwords.com/profile/view/mjmccann
Posted by Author Leanne Dyck at 9:00 AM