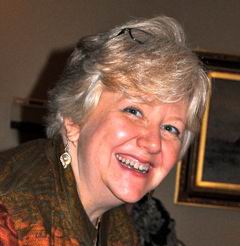 
My first complete tale was a fanfic, written for my best friend in high school. I’m really hoping she burned her copy. I played around with a MacGyver fanfic, off and on, for probably ten years. Finally finished it when I had some personal trauma going on in my life: laid off, spent my severance package to support my decision to take on night-nursing of my fragile elderly mother who’d just broken her leg. When the Mac tale was done, I still needed an escape hatch—which turned out to be a wormhole to the Scotian Realm and the planet Forge.

Once I’d drafted Forge, bolstered by my sisters’ enthusiasm for the story, I scraped up the courage to post the tale on a crit site. To my delighted amazement, the folks there started demanding the next chapter, and the next.... With the help of their feedback, I pounded Forge into better shape. I also met my writing buddy, Robert Roman on the crit site. I slogged through a lot of slush looking for stories I wanted to read and crit. Bob was doing the same, and we tripped over each other. We started to give each other feedback. Bob also continued to bug me about sticking with the query process, and when he sold a short story to Decadent Publishing, he told me to send Forge in to them. The rest is history!

Forge is my first published fiction. I’ve done a lot of business writing, and even spent a couple of years on Capitol Hill as a press secretary, so I’ve seen a lot of my writing in print. But nothing compares to breaking through the “author” barrier.

Decadent’s bread-and-butter is e-books, so you can find it on Amazon, B&N, Smashwords, etc.—and, of course, at Decadent Publishing—for the e-reader of your choice. There will also be a print-on-demand paperback available through Amazon sometime in the future. I still love the tactile feel of a book in my hands, but I’ve grown equally fond of my Kindle. And the Kindle app on my smartphone. I broke my right wrist this past July. The e-reader was soooo much easier to handle than a dead-tree book. Plus, I travel a lot, and with the Kindle, I can pack as many books as I want, without adding an ounce to my luggage. (Happily, the wrist is better now!)

Forge was released this past July 2012. A very happy memory for me. People were just starting to come in for the family reunion. Forty or so aunts, uncles, cousins, and friends were at my brother’s for dinner—and some pickin’n’grinnin’. (Bluegrass, anyone? With some Simon & Garfunkel thrown in?(Count me in)) My brother had left his computer up and running and logged onto Amazon, so I checked to see if Forge was out yet...and there it was! Two of my sisters pulled out their Kindles in a race to see who could buy it first. And a few glasses were raised to toast the occasion. Possibly raised more than once.

Following my stint on Capitol Hill, I spent a lot of time in communications and all kinds of human resources roles. In addition to an ability to critique my own writing (and accept the constructive feedback of others) without flinching, I also gained an appreciation for deadlines, and excellence in the final product. Plus, you can’t make up the people you meet.

Before I started to write fiction, I had no real appreciation for the Greek concept of “The Muse.” Now I’ve met her. She’s both an entity in herself, and a useful way of boiling all the sources of influence and inspiration into one handy term. For Forge, the immediate inspiration was my personal angst over rather traumatic life events...and the quiet, courageous endurance of my elderly mother, who battled back to her feet against all medical expectations. I did a lot of thinking about the meaning of suffering and human dignity during that time, and some of those themes showed up in Forge. But I’m sure God had a hand in it, because without all that trauma, I most likely never would’ve written the book in the first place. As my friend told me at the time, (I forget who she’s quoting): “Nothing bad ever happens to a writer. It’s all material.”

I wish I could! I’m still very new at the published author gig, and feeling my way through an industry that is reconstructing itself under my feet. In many ways, this is a very good thing, as it creates more opportunity for writers to become authors. But navigating the cyber-ocean to find people who might like my stories is a new challenge for me. Setting aside my techno-peasant inclinations, I’ve built myself a website, and gotten Facebook, Twitter, and Goodreads accounts, and put together an Author Page on Amazon.com. And I recognize that I’ve only just begun to assemble the tools to build a platform.

Leanne, thanks so much for having me. (It was my pleasure, T.K.) I’m so pleased to be able to spend this time with you and your readers. Here’s wishing you all the best!

I love to hear from fans, and I can be reached at my website, on Facebook, on Twitter and on gmail. You can probably also reach me on Goodreads, but I’m still figuring that one out!

Blurb
Warned by a Seeing…The high king of the Scotian Realm expects the arrival of an enemy, a race of psychic predators bent on galactic conquest. The Realm’s one hope is alliance with the neighboring star domains in defense of a shared colony, Forge.
Caught in Fate’s grim weaving…Mindblind, amnesic, Tazhret lives out his drug-induced visions of servitude on Forge. He wants to believe the beautiful woman with the nut-brown hair who whispers reassurances to his harrowed heart: “You have a name.” But is she even real? Or just one bright thread in his dark dreams?
An unexpected hope…Tazhret’s destiny leads him to freedom and the woman he yearns for
—and to a desperate struggle against the enemy. Tazhret can save Forge, and the clan of his beloved. But only at the cost of all he has hoped for: his name, his freedom, and his love
for the woman with the nut-brown hair…

~~~Excerpt~~~
Clenched in the grip of a fateful vision, the black web of Tazhret’s nightmare suffocated him, paralyzed him. While his heart pounded in terrified denial, the ensnaring net grew dense, and tight, cutting off all light, all sound…every breath of air. The nightmare shifted, and the web became chains, chains of red fire burning into his skin, binding him, crushing him in nameless enslavement to an evil will while his soul cried for freedom.
One thread of light, an answer to a desperate prayer, shone in Fate’s grim weaving of a dark future.
She was beautiful. She gazed at him, her luminous amber eyes sorrowful in a pale face framed by dark hair. She insisted against all evidence, You have a name. A good one.
He knew he loved her. His heart ached for her.
He wondered who she was.
Links:
Website: http://www.scotianrealm.com
Facebook: https://www.facebook.com/tk.anthony.90
Twitter: @TK_Anthony_