Ethan Frome is a tragic love story--boy wants girl; boy can't have girl because boy has another girl.

Ethan Frome is a mystery--why does a man choose social isolation?

Ethan Frome is about being trapped in  a living hell because you're too worried about doing right by everyone except yourself.

Ethan is engaged in studies at Worcester technological college when he is called back home to Starkfield, New England--a remote farming community. His father is dead and Ethan must take responsibility for running the farm and the lumber mill. Due to the remoteness of the farm (and possibly grief), Ethan's mother's health begins to suffer. The weight of the farm, the lumber mill and his mother are too heavy for Ethan to carry alone so he asks his cousin Zenobia "Zeena" Pierce to move to the farm to nurse his mother.

Zeena's poverty-stricken cousin Mattie Silver comes to Frome farm to serves as Zeena's unpaid aid. And Ethan 'had taken to the girl from the first day.' (p. 32) For him, Mattie's presence is like 'the lighting of a fire on a cold hearth.' (p. 33) and she looks 'like a window that has caught the sunset.' (p. 35) He is smitten. 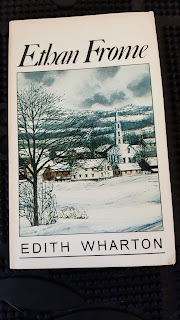 Out on daily errands, an unnamed narrator is brought 'up sharp' (p. 3) by a local man--Ethan Frome--who had 'something bleak and unapproachable in his face'. (p. 3-4) Another local tells the narrator that Ethan has looked '"that way ever since he had his smash-up; that's twenty-four years ago come next February."' (p. 4) And that Ethan has '"been in Starkfield too many winters. Most of the smart ones get away."' (p. 6) The narrator wonders, 'how could any combination of obstacles have hindered the flight of a man like Ethan Frome?' (p. 9) And we must read on to solve the mystery.

When I first learned about Ethan Frome the solution to his problem was so clear to me. He should have been straight with his wife. He should have simply told her that he no longer loved her. Then he would have been free to have a happy life. Back then things were so clear to me. Things were either black or white. I'd yet to learn of life's many shades of gray. I'd yet to learn that the path to happiness isn't always straight or level. Sometimes you have to deal with bumps and curves.

What initially attracted me to Ethan Frome was his moral dilemma.

What lingers after this reading are questions for three women--Edith, Zeena and Mattie.

Edith, you've written that you were drawn to write Ethan Frome because 'the New England of fiction bore little--except a vague botanical and dialectical--resemblance to the harsh and beautiful land as I had seen it.' Yet after reading these articles Edith Wharton, A Writing Life by Robert Armitage, Edith Wharton:  A Biography, and Edith Wharton: American Writer about your life, I was struck by the similarities between you and Ethan. Both of your spouses suffered from ill health and were several years your senior--Ethan's seven and yours twelve. Yet, whereas Ethan elected to devote his life to caring for his wife, you divorced your husband. Your life, Edith, was full. You 'established workrooms for unemployed seamstresses, convalescent homes for tuberculosis sufferers, hostiles for refugees, and schools for children fleeing war-torn Belgium' (Edith Wharton:  A Biography). You 'published more than 50 books.' (Edith Wharton:  American Writer) You wrote short story collections, short novels, novels and non-fiction books. You received an honorary Doctorate of Letters from Yale University, a full membership in the American Academy of Arts and Letters, and, in 1921, you were the first woman to win the Pulitzer Prize. Contrarily, Ethan's life was a living hell. I wonder, Edith, if--in writing Ethan Frome--you were justifying your decision to leave your husband--if only in your own mind? Did you wish to make a case against a life of duty, against conforming to societal expectations?

'Because of their shorter length, novellas have less time to explore subplots and tend to focus on the main plot. Novellas generally have one main character and a handful of secondary characters. Because of length constraints, most of the characters development will be found on the protagonist.' -How to Write a Novella:  Step-by-Step Guide


I long to learn more about Zeena (Ethan's wife) and Mattie (his love interest).

Zeena, what is it like for you to live out your days in a house, with a man, without love? Why do you stay on the Frome farm? Is it out of a sense of duty? Are you conforming to societal expectations? Do you still love Ethan? Did you ever love him? What hopes and dreams did you have for your life? 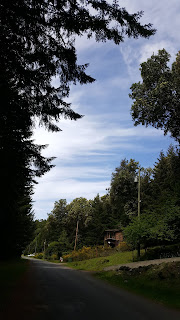 June on this blog...

On June 7th, we'll kick the month off with a bang by reviewing the 2019 Scotiabank Giller Reproduction by Ian Williams. You think you've read novels. Well you haven't seen anything yet, Charlie.

I've been working on this list for a while. All I know about blogging wrapped up in a nice neat little bundle delivered to you on June 14th. Hopefully, you'll find it helpful.

I wrote this short story for you...

A Dream Within A Dream

In my dream, I stumbled down the hall heading for the...

living room--head full of sleep. A man sat watching the fire  consume a log in the fireplace. He motioned for me to join him. His dreamy voice and soothing bedtime tale carried me off to dreamland.

Written way too late on May 19th or was it way too early on May 20th--I didn't look at the clock.