As the gap between rich and poor widens, those in power are losing touch with those of us down here in the trenches. What are our hopes, our fears? What frustrates us? What prejudices do we confront? This book gives a voice, gives a face to the people behind today's news stories. 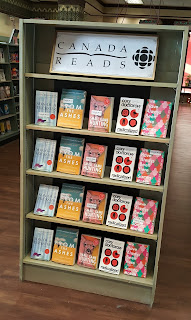 at Bolen Books in Hillside Mall on Vancouver Island

How I found Radicalized...

Canada Reads--a week to celebrate Canadian books and authors. Who wouldn't want to play along?

The longlist was announced and I selected Worry by Jessica Westhead. I went to the bookstore but couldn't find it on the shelf. When I asked for assistance, they told me the Canada Reads books would be on display in a week's time. During that week, the shortlist was announced. Worry wasn't on that list. Five books remained. Of those remaining, two were memoirs. I only review fiction. And I'd already reviewed Son of a Trickster by Eden Robinson. So I had two books to choose from--Small Game Hunting at the Local Coward Gun Club, a novel by Megan Gail Coles and Radicalized by Cory Doctorow. I love to write short stories and I know I should read more short story collections. I bought Radicalized.

I loved the humour in the first novella Unauthorized Bread.

'Homemade bread was something she'd read about in books, seen in old dramas, but she didn't know anyone who actually baked bread. That was like gnawing your own furniture out of whole logs or something.' (p. 19)

Salima, a refugee living in Boston, learns to take 'charge of the technologies around her, the ones that were used by those distant and faceless forces to take charge of her.' (p. 81)

Even though Unauthorized Bread is set in Boston, it could easily be set in any large city in North America--including Toronto, Montreal or Vancouver. 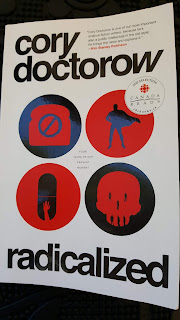 I rarely read science fiction. I don't read dystopia. My brain goes to dark places without the aide of an author.

Cory Doctorow was born in Toronto but currently lives in Los Angeles.

Radicalized was published by a New York publishing house and written by an author living in the States.

Is Radicalized a book all Canadians should read? Does it have any relevance for Canadians?

Model Minority is about a superhero. No, not Captain Canuck. The American Eagle. He witnesses a black man, Wilbur Robinson, being assaulted by four cops and later by a prison guard. Eagle swoops in to save Mr. Robinson. And he leaves Mr. Robinson to deal with the fall-out.

The American Eagle eventually asks Wilbur how he should have helped him.

"Well, the thing is, the time to ask me what I wanted from you was before you created this situation. I would have told you to record it, put the video on YouTube, give it to my lawyer." (p. 151)

'People are white if whiteness is endowed upon them by the wider whiteness.' (p. 123)

Does Model Minority have relevance for Canadians?

Has our judicial system ever treated those we identify as other unfairly?

Ask the aboriginals dumped off far from their homes and told to walk home in the winter. Ask...

Joe Gorman's wife has stage four cancer. He learns about a 1.5 mil course of action and seeks financing from his insurance company. The company basically tells Joe that it's his wife's time to die. Depressed Joe finds an on-line message board to help him cope with his emotions and feel less alone. The best message boards provide a 'nearly magical service for their participants'. (p. 181) The one Joe finds builds a 'rage culture'.(p. 184) It's a dark cave '"where good people are made evil."' (p. 223)

In Radicalized, a Canadian prime minister is quoted as saying:  'there are some places where markets couldn't do the job, and health care was one of them.' (p. 226)

But have Canadian citizens ever been victimized on-line?

The Masque of the Red Death

Martin Mars and the Thirty (thirty people who multimillionaire Martin has hand-picked) prepare for and deal with the end of the world. For me, this novella dragged. I just couldn't get into it. But my husband reads science fiction and dystopia. So I asked him what he thought...

The thing I like about the dystopian genre is people coming together and overcoming. The hubris of them all dying is not overshadowed by the fact there were no zombies.

Canada Reads is on CBC radio from March 16 to 19--usually, not this year. Due to CVOID 19, Canada Reads was held from July 20 to 23. The book that was chosen for all Canadians to read was We Have Always Been Here a memoir by Samara Habib 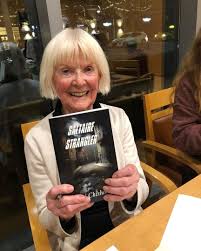 Cozies and Me by Benni Chisholm