Book review: When Everything Feels Like the Movies by Raziel Reid

I heard about When Everything Feels Like the Movies while listening to Canada Reads. One of the panelists complained about the amount of sex. I wonder if this is why it wasn't chosen as the book all Canada should read.

I'm surprised -- notice I didn't say shocked -- at how explicit  non-erotic fiction is becoming. I wonder when the pendulum will swing back.

I'm not in favour of censorship. I think artists need to be free to explore. Instead of running from ideas, I believe in informing myself. And so I begin to read...

Sure, there's sex, drugs and rock and roll. But it is a story about a teenager, would you wonder if there wasn't?

The sex, the drugs, the rock and roll, it's all germane to the story. In fact, I'm very impressed by how well the author has developed his teenage character. Jude breathes on on the page.

The internal dialogue is strongly written. We are deep in Jude's mind, but there's no trail of 'I thoughts'. For example, instead of 'I thought', Mr. Reid writes, 'It was like...'

Rather than be paralyzed by the violence he sees in home and at school, Jude fantasizes that he is a movie star. 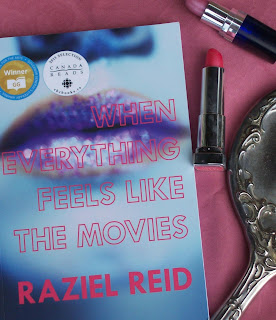 School is just like a film set:  there's The Crew that make things happen. The Extras who fill the empty desks, and The Movie Stars, whom everyone wants tagged in their facebook photos. But Jude doesn't fit in. He's not part of The Crew because he isn't about to do anything unless it's court-appointed; he's not an Extra because nothing about him is anonymous; and he's not a Movie Star because even though everyone knows his name like an A-lister, he isn't invited to the cool parties. As the director calls action, Jude is the flamer that lights the set on fire.

Before everything turns to ashes from the resulting inferno. Jude drags his best friend Angela off the casting couch and into enough melodrama to incite the paparazzi, all while trying to fend off the haters and win the heart of his favourite co-star Luke Morris. It's a total train wreck!

Jude is determined, independent, heroic and compassionate. He knows who is he and what he wants from the world and he's not afraid to shout it out loud and proud.  Even in the face of undeniable heart break, Jude believes in a 'happy-ever-after' ending to the last page.

This short book (170 pages) is power packed by a skilled author.


I looked down the highway. It was a long black stroke of ink that told a never-ending story (p. 135)

Marcy Kennedy wrote a helpful article on how to write strong  internal dialogue for the Writers of the Storm blog.

When they are ready, children need to be able to turn to a trusted adult for sex education. But figuring out what to say can be a challenge. That's why it is helpful to have books like...

Write:  he kicked a rock.
Don't write:  he felt angry.

Chances are, if you write fiction, you have heard about this rule.
But have you ever wished for an exception?
I have. And I thought I had found one. I thought that the exception was in play when writing picture books.
My theory:  Children have trouble identifying emotions so help them by showing and telling.

Write:  he felt angry so he kicked a rock.

Confident in my theory, I submitted my latest picture book manuscript to my writing group.

They said, "Hold on. Wait a minute. This is showing so that's okay, but this is telling re-write."

That's what they said, but none of them write picture books. And so, I told myself, what do they know.

In Nancy Raines Day's article for Fiction University (How to be Your Own (First) Manuscript Doctor), she wrote:

Nancy Raines Day is an author of numerous children's books. So, please excuse me. I have some re-writing to do.