I started to write for publication as an alternative to working 60 plus hour work-weeks as a bank officer. I had five children at home under the age of eight and I didn’t want to look back on a life where they were raised by caregivers instead of at least one of their parents. It was not an easy decision, especially when I learned that just because you write a book does not mean you’re ready to have that book sell and be published, but it was the best choice for my family and myself.

A lot of hard work on top of hard work. Writing is not the same as writing for publication. It took me about five or six full length completed novels to learn all the major elements of the craft of writing, a process that is ongoing. The reason it took so many novels is that the editorial review process was, for a lot of good reasons, very long, so it was just as easy for me to write the next book while waiting to learn how the previous one could be improved. My first published book took over two years to be reviewed and revised and reviewed again and it wasn’t until I sent a nice, but pointed note to my future editor suggesting that if they were still considering the project I’d be happy to rewrite the sex scenes to incorporate wheelchairs and walkers because the characters had aged so much. I received The Call within the week.

A Category Romantic Suspense novel. I researched the market and looked for what genre and which publishers offered the most openings and career opportunities for debut authors. That’s who I then targeted. What I learned though was that through traditional publishing there was a strong tendancy to grow an author by having them write more of the same. But as a creative I’d already moved on in what made me excited to write. The tension between the publisher’s needs and my needs was something I  took into account. Fortunately I had a wonderful editor who was willing to see a different type of novel from me, after I tried to write the type of story I’d written before. I was lucky that the publishing house I was with was in the process of opening a new line that was tailor made for what I wanted to write.

My first and second novels were published with Silhouette. The second one was part of a three book series with a kick-ass heroine (I read the parameters wrong and thought they wanted smart-ass heroines which was right up my line)  and more focus on a woman’s story journey rather than just about the romance. Unfortunately the roll out of that line met some marketing issues (readers expected romances from Harlequin) so that by the time my second and third book were scheduled for release, the line had closed. A great lesson in flexibility, which is always important to learn as any entrepeneur.

Back in the Stone Age? Some days it feels like that. I actually keep track of time via my children so an easy-reference time frame is I started writing when my oldest child was eight and the youngest three. My first published novel was when my youngest was starting high school (I’d like to pretend he was a very advanced student but I can’t) and I moved on to Indie Publishing when my youngest was leaving college. Boy, does the time fly!

What are you currently writing and why?

I’m currently writing nonfiction writing craft books to help other writers learn elements of the craft of writing. At this time I’ve published the WRITING ACTIVE SETTING series that’s met with a lot of positive feedback. I’m also writing an Urban Fantasy series called the INVISIBLE RECRUITS series with the initial books focusing on Alex Noziak, a part witch/ part shaman who is recruited with other women to fight preternatural threats in a world that’s unaware that we’re not all human. The books and novellas combine the pacing of thrillers, the who-done-it of mysteries, and a strong dose of romantic elements as Alex and her teammates learn to use their inate abilities in new and untested ways.

One of the things I’ve found fascinating about so many writers is that we can get bored easily so tend to have an eclectic career path. In other words a fun/intriguing job wins over the same job day after day. I worked in accounting, international banking, as a magazine editor and contributing editor among other jobs and yes, there is nothing that goes to waste for a writer. My sons once asked me if their dad could take them to the Emergency Rooms for broken bones and injuries because I’d get talking to the doctors and nurses about bullet wounds and how a vampire’s blood might be different than a human’s.

Learning stretches my comfort zone and makes me excited. Travel, lots of travel, new places, meeting new people, sharing with others, exotic food, handwoven textiles, the list can go on and on.

One of the platforms that has been a huge win-win for me is teaching. I didn’t have a teaching background but loved learning and sharing what I learned with others who wanted to write.  I started teaching online classes that quickly lead to speaking engagements with writing groups around the US and Canada. Not only did I have the opportunity to meet writers in a variety of genres but to make friendships around the globe. I hadn't intentionally thought of teaching as a platform until one of my NYT writing buddies was giving me a hard time because every where she traveled, including Australia and the UK, she kept running into people who knew of me.

Expect writing to be  published to be hard work. First novels are rarely ready for publication unless they’ve been rewritten multiple times. We hear about first books being published because it’s the exception, not the norm, and even then we rarely hear about how many drafts those books underwent to be ready for publication. Know what you want out of your writing—for enjoyment, to be published, as theraphy—whatever works for you works. Writing for publication means you are writing for your readers, keep that in mind, you are thus writing to meet their expectations and not only your own.  Not for every reader, but for those core readers who read what you want to write. Honor that commitment to them. Honor the commitment to yourself. To be a writer is a gift, an avocation, a responsibility.  Treat it as such and you can have a career that is ever changing, stimulating and exciting. And that can happen all in the same day!

Writing Active Setting Book One: Characterization and Sensory Detail
Readers usually remember the plot and characters of a story, but Setting is every bit as important in creating a memorable world. Discover the difference between Ordinary Setting that bogs down your story, and Active Setting that empowers your story -- creating a compelling story world, regardless of what you write.
See how to spin boring descriptions into engaging prose. Learn to deepen the reader's experience of your story world through sensory details. Notice how changing characters' POV can change your Setting. Explore ways to maximize the Setting possibilities in your story.


Discover the difference between Ordinary Setting that bogs down your story, and Active Setting that empowers your story -- creating a compelling story world, regardless of what you write. 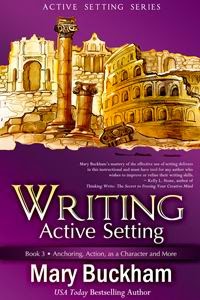 Active Setting: Book Three Anchoring, Action, as a Character, and More
Discover how truly Active Setting empowers your story -- creating a compelling story world, regardless of what you write.
Learn to use Setting to quickly anchor the reader into the world of your story. Use Setting as movement through space effectively. Explore Setting in a series. Learn the most common Setting pitfalls.

INVISIBLE MAGIC
BOOK 1 ALEX NOZIAK
Available Now for Kindle, Nook and Print!
Hidden from a world unaware of magic, a recently and only partially trained group of operatives known as the Invisible Recruits are the only ones willing to stand between mankind and those powerful preternatural factions seeking to change the balance of power and gain world domination.
Alex Noziak, part witch/part shaman, anticipates facing dangerous preternaturals out for blood . . not fashion week. But when the rookie agent is sent undercover to find out who, or what, is behind a series of world-wide thefts of top-secret intelligence, Alex tangles with the Seekers.
Seekers hunt gifted human individuals like Alex and her squad whose rare powers can keep the balance between human and nonhuman squarely on the side of the humans. Her simple assignment turns into a battle of survival for everyone involved when she crosses Bran, a mysterious warlock, who might be her only ally or worst enemy.


To save the innocent, Alex must call upon her untested abilities, but at what cost? 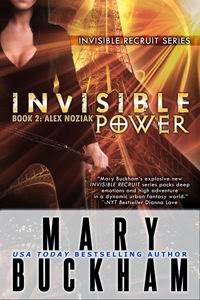 If she wins he’ll lose his freedom. If he wins she’ll watch her brother die.
Sworn enemies and former lovers must hunt the same enemy with different agendas. Alex Noziak, part-witch; part-shaman must save her brother before warlock Bran eliminates the only man who knows where her brother is hidden.
The IR Agency’s new recruits, each with unique if untested abilities, are brought deeper into the world of the preternaturals as their governing body, the Council of 7, is caught in a dangerous and vicious feud between Weres and Shifters.
But when Alex has a chance to save her brother and capture the Weres who held him hostage disaster happens.