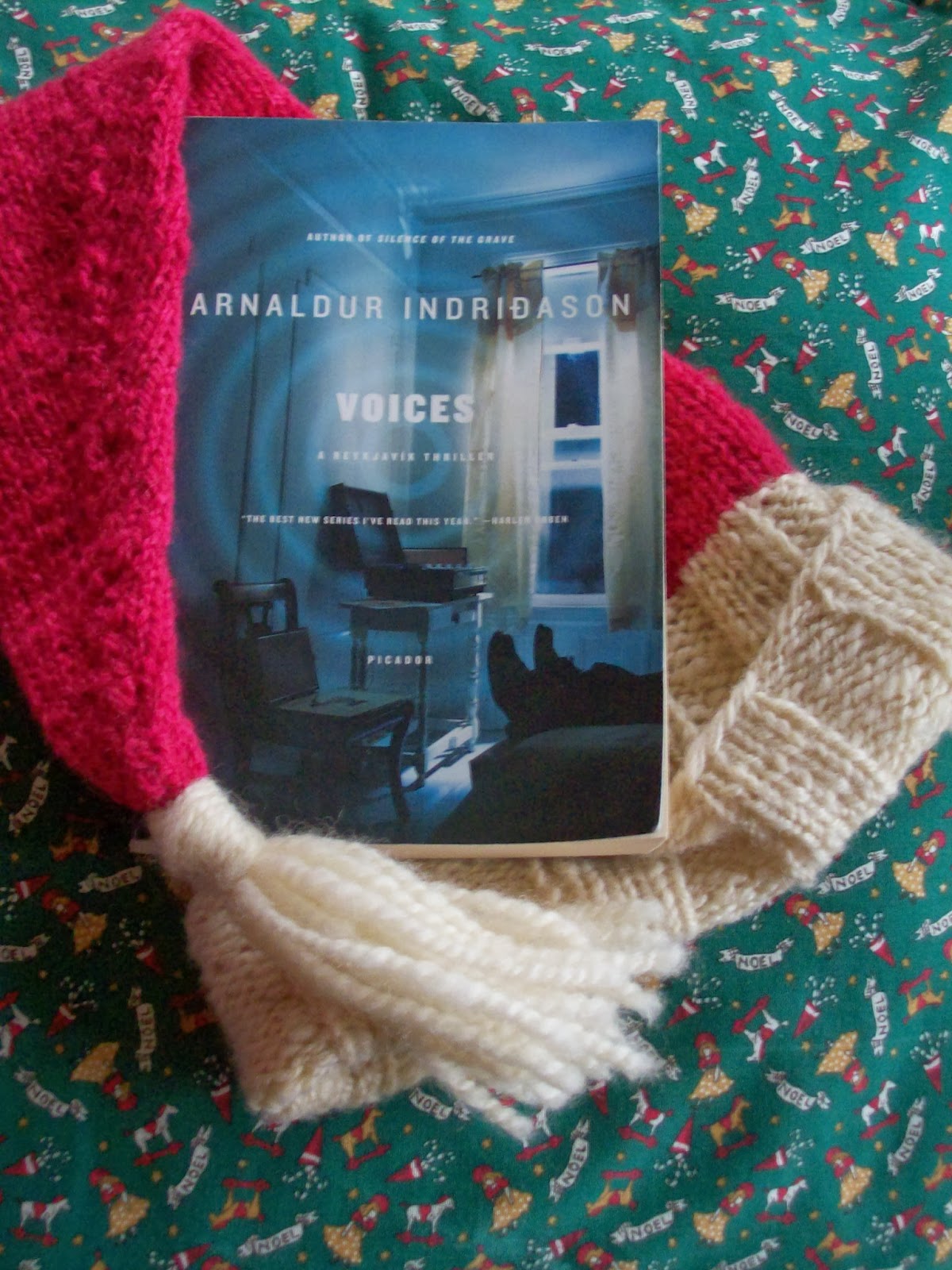 buy this book
(once on the page, scroll down)

My maternal ancestors immigrated to Canada from Iceland in the 1800's. A friend who knew of my connection to Iceland recommended the thriller author Arnaldur Indridason.

I walked into my local bookstore. To be honest, I was expecting to have to continue my search off island. But I was shown to a shelf that held a collection of mystery and thriller authors.

"Let me see," the bookstore owner said. "I know he's here somewhere. Ah, there he is." She offered me Voices:  A Reykjavik Thriller.

I read the back cover blurb:  The Christmas rush is at its peak in a grand Reykjavik hotel when Inspector Erlendur is called in to investigate a murder. The hotel Santa has been stabbed to death, and Erlendur and his fellow detectives find no shortage of suspects between the hotel staff and the international travelers staying for the holidays. As Christmas Day approaches, Erlendur must deal with his difficult daughter, pursue a possible romantic interest, and untangle a long-buried web of malice and greed to find the murderer. Voices is a brutal, soulful noir from the chilly shores of Iceland.

I flipped the book open and discovered that Arnaldur Indridason had written three other books--Jar City, Silence of the Grave, The Draining Lake before writing Voices. And this book was translated from Icelandic by Bernard Scudder.

Writer--Translator, what an interesting relationship that must be. The writer conceives of the story and brings it into being but the translator must adopt it and revise it to introduce it to a new audience. It is a weighty commitment requiring skill and insight. He must be the hand of the author. To do this, it seems to me, he must not only know the story thoroughly but also be able to write in the style of the author.

If you're interested in working with or working as a translator, check out Joanna Penn's page

Voices is described as brutal and some parts are, but it is also peppered with humour.

' "But you'd sacked him and were going to chuck him out," Erlendur said. "Then someone comes along and kills him. It hasn't exactly been going well for him recently." ' (p. 31)

Initially, Erlendur struck me as a man who enjoyed wallowing in, embracing, nurturing misery.

'Christmas meant nothing to [Erlendur]. He had a few days holiday owing and nothing to do with them...
Sometimes he bought a bottle of Chartreuse at Christmas and had a glass beside him while he read about ordeals and death in the days when people travelled everywhere on foot and Christmas could be the most treacherous time of the year. Determined to visit their loved ones, people would battle with the forces of nature, go astray and perish; for those awaiting them back home, Christmas turned from a celebration of salvation to a nightmare. The bodies of some travellers were found. Others were not. They were never found.

But as I continued to read I realized that there were reasons why Erlendur is the way he is--reasons beyond his control. He's haunted by a boyhood lose. And I began to think that my prior judgment of him was too harsh. I read on as he tried to form a romantic relationship. Even though it was very hard for him, he reached out to Valgerdur. But inevidentably the strain was too great and the date ended abruptly.

The judgment of outsiders seems to be a reoccurring theme. For example...

'Sigurdur Oli explained the death of the doorman and told them about the note in his room. Mr. and Mrs. Henry Bartlet [American tourists] stared at the detectives as if they had suddenly been transported to a different planet...
"A murder?" Henry groaned. "At this hotel?"
"Oh my God," his wife said and sat down on the double bed... "You have murders in Iceland?"...
Rarely [Sigurdur Oli] said, trying to smile.' (p. 51 - 52)

' "The teacher said you make unrealistic demands on your son."...
"What's unrealistic? I want him to get an education and make something of himself."
"Understandably," Elinborg said. "But he's eight years old, dyslexic and borderline hyperactive.
...It all mounts up, and in the end you explode when Addi, who's surely spilled milk and dropped plates on the floor all his life, knocks a bottle of Drambruie onto the marble floor of your lounge." (p. 153 - 154)

This last scene especially caught--as I have dyslexia. Do you think Elinborg is saying that there is something especially annoying about dyslexic people? Do you think she's suggesting that they (we...I) deserve pity? Or maybe I'm just being sensitive?

I am also caught by the beauty of the descriptions...

'Snowflakes fell cautiously to the ground, as if the heavens had split open and their dust was being strewn over the world.' (p. 32)

As well as the characters, who seemed so real...

' "Do you know what it's like not to be the favourite!... What it's like just being ordinary and never earning any particular attention. It's like you don't exist. You're taken for granted, not favoured or shown any special care. And all the time someone you consider your equal is championed like the chosen one, born to bring infinite joy to his parents and the whole world. You watch it day after day, week after week and year after year and it never ceases, if anything it increases over the years, almost...almost worship...

It can only spawn jealously...Anything else would not be human. And instead of suppressing it the next thing you know is that you're nourished by it, because in some odd way it makes you feel normal." ' (p. 222)

Arnaldur Indridason is a skilled author who switches back and forth in time with different characters--in the same chapter--and only employs asterisk to guide the reader--yet I never got lost.

I was helpless, putty in his hands, until the final word, on the final page--unable to do anything but read. My only disappointment was that I didn't find out what happened to neither the boy with dyslexia nor his parents. But it was, after all, only a secondary plot and clearly not meant to be resolved.

I enjoyed reading this interview with Arnaldur Indridason. In it, Arnaldur addresses how the Icelandic sagas (the Eddas) have influenced his own work.

If you'd like to learn more about Christmas in Iceland and how Icelandic Canadians celebrate Christmas, I'd highly recommend you read Volume 66 #1 (2013) of the Icelandic Connection.