In 2009, my husband I left Mayne Island to attend a magazine launch in Victoria so that I, as a contributing author, could read 'Because She Believed In Me'. This is the short story I wrote about that adventure.

It was chilly night yet the sidewalks were full of people.
“Why are there so many people out walking?” I asked Byron.
“How should I know?” He shrugged. “Maybe that’s just what they do here.”
“This neighbourhood reminds me of Osborne Village,” I said. Winnipeg’s riverside neighbourhood had been the first place we’d lived as a couple. We shared a smile and continued exploring.
“You going to watch the parade?” one neighbour asked another.
Byron leaned in close to me. “Parade,” we shared the word, savoured it. And we didn’t have long to wait. Trucks, service vehicles, even two city buses—all decked out in lights. Some even provided Christmas carols. When the last Christmas tree on wheels drove past Byron said, “We should start our way back.”
My reading. I can’t be late. Which way is back?
I started down one street but it led us to unfamiliar sights.
“I don’t think this is the right way,” Byron said.
“We’re lost. What if they call, ‘Leanne Dyck’—and I’m not there.”
“Won’t happen,” Byron said.
Sure he can say that. It’s not his thing. He doesn’t really care. Well, he may not. But I do. And I’m going to find that hall; I’m not going to be late; I’m not going to miss this opportunity. I stormed down one street after another—possessed by my mission.
I was so relieved when Byron said, “There it is. See we found it. But we better hurry—only five minutes to show time.” 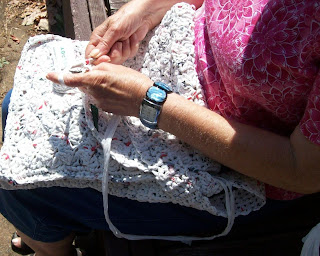 My mother-in-law prepares her entry for
Mayne Island's fall fair
Saturday, August 17th
Posted by Author Leanne Dyck at 9:00 AM