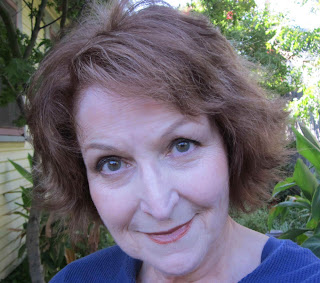 I have always kept journals: poems, dreams, philosophy, painting and story ideas. I think it is common for writers to write—whatever and whenever they can, even if for no one but themselves.
I began to write short stories when I helped found the San Joaquin chapter of Sisters in Crime. We held a contest, more as a spoof in the beginning, to encourage our writers to write. The goal, judged by outside judges, was to win the Coveted Dead Bird Award (upside down black raven-like bird (not real) on a trophy. I think submitting to contests is a great way to develop your writing, especially if feedback is given from the judges.

I always wanted to write a novel but it wasn’t until I had a déjà vu experience at the ruins of Coba in the Yucatan, Mexico, in 1987 that I was inspired to start. My first book is the result of that experience. It took me years to learn the craft of writing while constructing the story, and more years learning to revise and edit it.
Becoming an author requires a different skill set than being a writer. It has to do with willingness to revise your work so that it is publishable, getting past any self-sabotaging behaviors that interfere with opening up your work to others for possible criticism and/or rejection, and the willingness to learn yet another skill-set (promotion and marketing) for getting your book out to the public. That is what it takes to become an author for most writers in today’s market.

The first was a short story I wrote was for the Coveted Dead Bird writing contest which I mentioned above. I didn’t win, but I sent that piece off for consideration to be included in an anthology of murder mysteries by a German chapter of Sisters-in-Crime. It was accepted and published in Murder Between Knife and Fork. The story, Seeds of Revenge, is about a revenge murder via the poisonous seeds of the wild Jimson Weed.

What else was published?

After getting that first piece published, I kept writing short stories until I had quite a few, some contest and award winners. After several years, two of my Sister in Crime sisters and I decided to jointly publish all our stories in an anthology of mystery and suspense set in the San Joaquin Valley of California. It was published as Valley Fever, Where Murder is Contagious. The title is a play on the name of the lung infection derived from breathing in the soil-dwelling fungus found in our valley called Valley Fever (deadly in rare cases). That was in January 2003.

What is your most recent published work?

During all the time I was writing short stories and getting them published, I was also working on my first novel, Dance the Dream Awake.

How did you come up with the name for your novel?

I was trying to focus on how I would write the novel and decided to start by doing a freeform painting. I find the arts overlap and sometimes one will stimulate the other. I painted this woman in a mask, dancing around with a rattle and it was frightful. She was dancing the dream awake –for me. That turned on the light bulb and I envisioned the nightmares that Tessa has at the beginning of the novel. Because every “expert” in the writing field says not to start your novel with a dream (cliché), I begin in Tessa’s psychiatrist’s office where she is trying to make sense of the nightmares she’s been having. She is, in effect, trying to ‘dance the dream awake.’

What did you do before embarking on your writing career? Was it an asset to your writing?

It was strange that I began teaching (children with learning disabilities) at the same time I began writing my novel. It was a busy time learning how to teach, how to write (I took writing classes at night) and writing. I can’t say that teaching was an asset but maybe learning the structure to teach enabled me to be disciplined to write consistently.

But once I decided to write this novel, it was like, “Okay, now I dedicate this part of my life to this.” No going back. After I retired I was finally ready to publish. I had lots of criticism for waiting so long, but I tend to do things at my pace and don’t succumb to pressure easily. It wasn’t like I was going to make a million dollars on my first book! It makes for a happier life with less stress to go at your own pace—something I couldn’t do if I were under contract. My next book is almost ready to be published, with another half done, so it wasn’t some awful pattern I was creating by waiting so long on the first.

Everything around me is fuel for inspiration. As an artist, I try to look at things in fresh new ways, through the lens that is my viewpoint, and that spills over into writing—same thing. Observe what is around you and ask, “What if. . . .”

I began a travel blog years ago to become familiar with what it takes to write one. Then a little over a year ago I started a personal/writing blog when I knew I would have to build a platform for when I published. I try to write for readers, but somehow most of the readers are writers. I don’t give much writing advice as there are many good teachers on the internet for that already.
I am of the opinion that what you give out will come back to you (the whole karma thing). I have tried to develop supportive relationships with other authors and friends on Facebook and within other author groups. If we can all help each other move forward, we are all more likely to get ahead than going it alone.

I am writing the past life story of Jack from my first novel. It started out as part of the story I was writing as a follow-up book to Dance the Dream Awake, focusing on Jack and Tessa. But the past life story wouldn’t take a back seat to the main story so I had to stop and write that past life as a stand-alone book first. It will be called Haiku Dance and is set in 980 A.D. Japan, in the Heian era (just before the famous Tale of Genji was written). It will be a sizzling romance.

I have always tried to keep an open mind. I read like that and write like that. I think when we close ourselves to new or different ideas we begin the process of death. Open is an expression of outward movement of growth, closed is a withdrawing, dying movement. Write with passion for the yet unrevealed that will be revealed, the mystery that will be uncovered, the love that will be found and consummated. Enjoy your life with open arms and write it into your work. 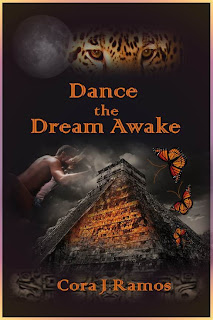 Blurb of Dance the Dream Awake:
A past life intrudes into the present.
Tessa Harper throws herself into a trip to Mexico as a last ditch effort to stem the nightmares of a Mayan sacrifice that have plagued her for months. She reasons that by going to the ‘belly of the beast,’ to the Yucatan peninsula in Mexico where the Maya lived, she might find answers that will make the awful dreams stop.
She meets Porfirio, an unfulfilled love from that distant past. Amorous archaeologist Nick Richardson uncovers recent artifacts underneath the ruins of a Coba pyramid; artifacts that might help explain what happened to Tessa in a previous life that is un-resolved. When someone is after the strange beads she came into possession of, the suspense is on. Who wants them and why? Three curanderas (women shaman healers) have been waiting for Tessa at Tulum and she must decide if they are there to help her or, as her “friendly” neighbor Jack believes, are up to something more nefarious.   http://www.amazon.com/Cora-Ramos/e/B00BAKLGXO