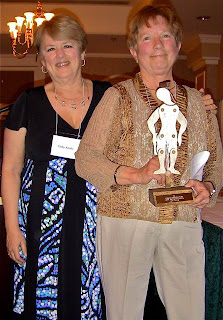 I found myself both honoured and terrified to be asked to be the emcee at this year’s Arthur Ellis Awards  for Canada’s best crime writing.

Ellis was the nom de plume of Canada’s last hangman, and the little wooden hanging man statue is a unique, hand-made prize. When the string is pulled, Arthur jumps up and down.

At the Hilton Toronto on Richmond Street on May 31, a near record crowd of about 140 had gathered in the ballroom. One glitch was that due to the special dessert “event,” the evening wouldn’t begin until 8:00 pm, so when introductions were made by our president Garry Ryan , I told the group that they would be served their salad and entrée first. The huge laugh disconcerted me for a moment. When you’re not trying to be funny…

Forty minutes later, it was on to my commentary, which included a “rally the troops” beginning, citing our origins in 1982 when a few founders hoisted drinks to a new organization. The awards were begun shortly after with a few categories, including best first novel, best short story, and best novel. As the years passed, the group moved forward with a website, the catalogue, Cool Canadian Crime, Word on the Street and other events to celebrate National Canadian Crime-Writing Month, the mentorship program, the Unhanged Arthur Sponsorship as well as recent initiatives with the CBC, Zoomer magazine, and the National Post. Our membership has reached 340! These are amazing numbers for a small country.

But since I was asked to speak for twelve minutes, I decided to offer a few suggestions for the future. Not long before, I had read an Icelandic book and came across this sentence: “Before going downstairs, he telephoned Sigurdur Oli and told him to go with Elinborg to Hafnarfjordur to take Gudlaugur’s sister in for questioning. I found myself staring at the sentence and repeating it as if I had entered a new country. I had invested in this book, and not merely because of its constant mention of needing to boil smoked lamb for the upcoming Christmas holidays. A month later at Left Coast Crime, a conference in Sacramento, I heard Helene Turstan, a prominent Swedish crime writer, asked what made the Scandinavian mysteries so popular. She replied, “Ve are exotic.” Now I had my topic. Canada needs to capitalize on its differences, not its similarities, especially to our elephant neighbour down south.

And we have the tools to be exotic.

As for foods, we can do as well as that boiled smoked lamb. How about cod tongues, jellied moose nose, scrunchins, or candied salmon?

We’re not much on guns, but Off insect repellent and Bobex deer repellent could turn back a villain or a neighbour. Icicles can do damage, too.

Exotic history? The Diefenbaby, Prime Minister King’s dog, mother, and séances, and the Pig War in the San Juans.

International plots? Suppose the REAL Jesuit Relations were discovered in a revelation that could bring down the Papacy? A plot to kidnap Justin Bieber could expand the audience to tens of millions of pre-pubescent girls.

Then as stomachs rumbled and wine flowed, the awards took center stage.
Don Graves and Catherine Astolfo received the Derrick Murdoch Award for their incomparable contributions to the CWC.

The Best Unpublished First Novel went to Sam Wiebe for Last of the Independents.
Astolfo also won the Best Crime Short Story for “What Kelly Did,” a double night for her.

Peter Robinson took home the Arthur once again for Best Novel, Before the Poison.

At last the special dessert event was ready, created by the Sugarstars from the Food Channel. They ushered us into an autopsy room filled with sweet temptations. A covered body lay on the gurney, and all around were jars and plates and cupboards of organs. Eyeball lollipops, pounds of brains being weighed, platters of kidneys, vials of blood and other amazing creations. Everyone dug in as directed. The event was being filmed and will air in August. So be sure to tune in!

Although I was too nervous to eat the dinner, and left early during the “autopsy,” I got praise for my Icelandic pronunciation. Turns out there was someone at the dinner who spoke the language after all.