When did you decide to be an author? What has your author journey been like? This short story was inspired by my answer to those questions... 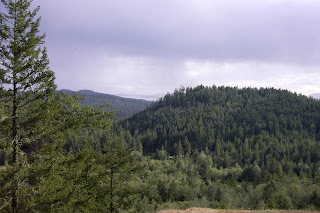 "On Mayne Island" photo by ldyck

Once upon a time (on October 10, 2010, to be exact), a woman packed a pen and some paper and set out on a journey. She had heard about the hill throughout her life. She'd thought about it... Others had encouraged her to climb... But she'd put excuse after excuse in her way. She'd been too scared to even try. But that day, she shoved her fear out of the way and jumped over her excuses.

The sun was warm on her back. The chill fall breeze was invigorating.  From the base of the hill, it was hard to tell its height. She didn't know how long it would take her. But she put one foot in front of the other and started to climb.

Day after day, week after week, she climbed. Sometimes she felt lonely. But the woman wasn't alone.

Others called, "Hey, do you need help"--and gave her a walking stick, more paper, a pen.

Others silently watched her climb and she felt their support.

Month after month, year after year, she climbed. Sometimes she tripped.

"You're going to hurt yourself," people called from the grass, beside the path. "That's why I stopped climbing. It's way too hard."

Those people looked a lot more fit than she was. The woman's legs were too short. Her lungs were too small. What made her think that she could succeed when others had failed?  Was it really worth all the effort? How much longer would it take? How high was the hill? The grass looked so soft. Her pack felt so heavy. She bent her knee. She rested but...

"Don't stop! Don't stop!" one voice called and then another. Soon a chorus encouraged her on. "Keep going. You can do it. We believe in you."


Those voices... That support... They carried her. And that's how the woman is still climbing. 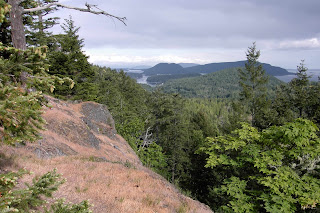 "On Mayne Island" photo by ldyck