I meet Arthur Beauchamp in my aunt's living room. He looked interesting so I picked him up. He was engaging, entertaining and clever. I knew I wanted to further our relationship and looked forward to our next meeting.

Recently, I meet Mr. Deverell again on Mayne Island. He brought Mr. Beauchamp with him -- all wrapped up in a shiny new book. So, of course, I bought a copy.

I flipped open Sing A Worried Song and Mr. Beauchamp charmed me from page one. Even though, at times, he seemed more superhero than human.

Before beginning his author career, William Deverell was a lawyer. The first half of Sing A Worried Song focuses on one of his court cases.

Though I practised mainly as a criminal defence counsel, I was on occasion retained by the Attorney-General of British Columbia to prosecute homicide trails, some of which attracted wide public attention.

The trail featured in the opening section of this novel roughly recreates one of them, an alleged thrill killing in Vancouver of a lonely down-and-outer.

Mr. Deverell makes excellent use of his font of knowledge regarding the Canadian judicial system. And I welcomed his light touches of humour.

The second half of the book takes place over twenty years later and is set on a Gulf Island. Island culture is depicted with warmth, humour, and intrigue. Mr. Deverell introduces the reader to mysterious island activities -- such as everyone seeming to know your business before you do.

Interesting to note, one of the points Mr. Deverell made at Bloody words is that author's should write what they know. He certainly does this in Sing A Worried Song. As well as having been a lawyer, Mr. Deverell also resides, half the year, on a remote Gulf Island.

The only difficulty I had with the book was the overabundance of names. Through the course of the book a single character may be referred to by three separate names -- surname, first name and nickname. This forced me to re-read more than one passage several times to find clarity.

This sixth novel in the acclaimed Arthur Beauchamp series.

For Arthur, the prospect was a challenge, something different:  a sensational murder case, with its dark irony of a happy-faced clown being bumped off by an alleged thrill killer. It was a chance to see things from the other side, to work with the vaunted Homicide section of the Vancouver police. A chance to demonstrate how a prosecution should be run:  transparent and even-handed, without guile or hostility. 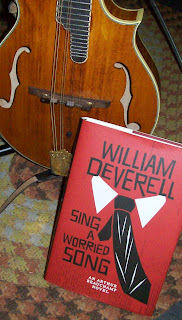 What book does William Deverell recommend?

The Jaguar's Children by John Vaillant

Room (Canadian women's literary journal) asks:  Have you submitted to the Women of Colour issue yet?

Here's the link to their submissions page.

Another month has come and gone and this is what I did with it...

made 7 submissions (for a total of 46 submissions this year)
wrote 4 manuscripts
received 9 critiques
finished reading 1 book (approximately half way through another)
attended 2 community charity book sales and came away with an armful of books
(one of my dreams is to have my own library in my own writer's den -- currently I work in a corner of my living room. Sad, but true.)
(Okay, it's not that sad--but it could be happier.)
Keep smiling : )
Posted by Author Leanne Dyck at 5:00 PM